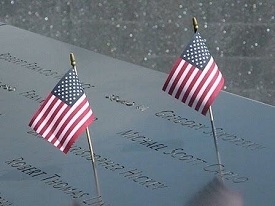 Two American flags are placed at the 9/11 Memorial in New York City in memory of the nearly 3,000 Americans, including one man from Arlington, who died in the attacks. / Tim Moran/Patch

Anyone older than 25 in Arlington likely remembers where they were on 9/11.

Americans felt a collective trauma as first one and then another plane flew into the twin towers of the World Trade Center in New York City on Sept. 11, 2001. As the truth dawned on people watching from their TVs that America was under attack, another plane took aim at the Pentagon. A fourth was brought down in a field in Pennsylvania in a final act of heroism by passengers who realized their flight had been hijacked.

Nearly 3,000 Americans, including an Arlington man, were killed in the suicide attacks carried out by 19 militants associated with the Islamic extremist group al-Qaeda.

On the 20th anniversary of the attacks, Arlington remembers and mourns 49-year-old resident Joseph Mathai, a managing partner with Cambridge Technology Partners who divided his time between Boston and New York, according to The New York Times.

Those who knew Mathai described him as "gentle" and "unassuming," with a voracious appetite for learning.

"We have an open-door policy, and I could always hear his laughter," Eric-Jan Schmidt, a colleague of Mathai's at Cambridge Technology Partners, told the Times.

All 9/11 victims will be remembered at memorial services planned across the nation on Sept. 11 to mark the 20th anniversary of the attacks.

At the 9/11 memorial in Lower Manhattan, New York — an area known for years after the attacks as "Ground Zero" — the names of the fallen will be read aloud.

"Throughout the ceremony, we will observe six moments of silence, acknowledging when each of the World Trade Center towers was struck and fell and the times corresponding to the attack on the Pentagon and the crash of Flight 93," the 9/11 Memorial & Museum wrote on its website.

The annual "Tribute of Light," which are lights pointed to the sky in the shape of the twin towers, will go on that night.

Most 9/11 victims were from either New York or New Jersey, where many who lived across the Hudson River from the World Trade Center recall the horror of watching the twin towers collapse from their homes in Hoboken and Jersey City.

The Pentagon Memorial, which honors the victims of the Sept. 11, 2001, attack on the Pentagon, recently finished renovations, according to the Department of Defense.

Secretary of Defense Lloyd J. Austin III and Chairman of the Joint Chiefs of Staff Army Gen. Mark A. Milley are planning to host an observance ceremony at the Pentagon Memorial at 9 a.m. on Saturday to honor the memory of those who died on 9/11, according to ABCNews7.

This news report by Alex Newman of Patch was published Friday, Sept. 10, 2021, as part the partnership with YourArlington.