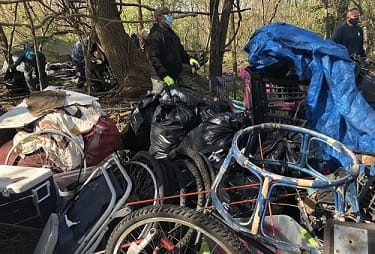 Helping to clear trash at Mugar Woods on April 24 were, in background, Select Board member Len Diggins and Capt. Richard Flynn, right.Although impossible to remove every piece of debris, the hard-working crew significantly improved the woods’ appearance.

Located between Thorndike Park and Route 2, Mugar Woods is home to a rotating community of anywhere from three to 18 unhoused people. The number varies because three is the count provided by the Greater Somerville Homeless Coalition (GSHC), and 18 is the number of tents reported by neighbor/volunteer John Callinan, who said that many unhoused people often scatter during inspections.

Everyone chipped in with this Herculean task—from Arlington High School students to those past retirement age—even this reporter! Together, we collected vast amounts of strewn debris into garbage bags, wearing APD-provided work gloves, and then loaded the bags into dumpsters.

Volunteer Aggie Li, an Arlington High School senior, said, “This cleanup effort is beneficial for the community, the Earth and the homeless population. It’s not their fault, because they’ve no way to dispose of their trash.”

Callinan said he wanted to help clean up the area, and to see whether any progress has been made to solve the unhoused population issue. “I helped at last fall’s cleanup, and the situation has gotten much worse. There’s twice as much trash, and the number of tents has increased from 10 to 18.

“I’m concerned for the neighborhood’s welfare. The homeless population has significantly increased the rat population in my neighborhood, which abuts Mugar Woods. Furthermore, my neighbor couldn’t hold a recent Easter egg hunt for her family because two homeless men were yelling and causing a disturbance,” he added.

Select Board member Len Diggins, who helped pick up trash, said, “The real credit goes to those who organized this cleanup: the Arlington Police Department and the Greater Somerville Homeless Coalition. 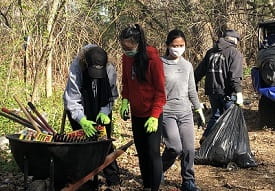 “We take our services to where people are sleeping/living, and there are more unsheltered homeless now since the pandemic. We come out every week, and the people living here trust us in getting them housed,” said Hannah O’Halloran, coalition emergency-services program manager.

Because of the pandemic, homeless shelters can accommodate far fewer people now, explained Police Officer Joe Canniff, who oversaw the cleanup effort. Canniff is a member of the Homeless Outreach Task Force, which includes the coalition, the Board of Health and clinician Rebecca Wolfe.

Coalition board member Jeff Bernstein said that, although he was happy that Arlington is cleaning up Mugar Woods, “more still needs to be done regarding the trash, the homeless and the neighborhood.”

Nevertheless, Canniff said, “Today’s success was wonderful, and made possible by our partnership with the Greater Somerville Homeless Coalition.”

It’s refreshing to see the power of humanity, with everyone coming out to help. It’s a forgotten world back there."
-- Officer Canniff

“The abutting neighbors volunteered and brought tools and water. It’s refreshing to see the power of humanity, with everyone coming out to help. It’s a forgotten world back there. We have to remember that the homeless are people, and members of the community,” added Canniff.

Police Chief Julie Flaherty, who also helped remove trash, was grateful for the members of the community who came out to clean up these woods and said, “We’re working to house the remaining individuals living here.”

Meanwhile, the place where the homeless live near Thorndike Field could become housing of a wholly different kind, though town officials have opposed the planned project since 2015. On May 11, the Zoning Board of Appeals is scheduled to hold what could be the final hearing on the developer's permit application for Thorndike Place.

This news summary, by YourArlington freelance writer Susan Gilbert, was published Monday, April 26, 2021, and updated April 27, to add a link to more photos. It was updated April 28, to change "conservation" in the lead to "unimproved."

Ride for Food cycles on through Nov. 30 to aid rescue nonprofit

"A fall celebration and community gathering is…

An open-air celebration of "Remembrance of…

Apply for 2022 arts grants by today

UPDATED, Sept. 22: The grants committee of the…

Deadline passes to vote on Arlington Reads Together book

You are invited to vote for Arlington’s next community book…

Sitework for construction of new AHS: Through week of Oct. 18

Deadline passes for your mapping suggestions UPDATED, Sept. 30: The town is creating a housing plan…

Zoning board had scheduled 5 hearings