High bikeway counts in May show Minuteman's breadth of use 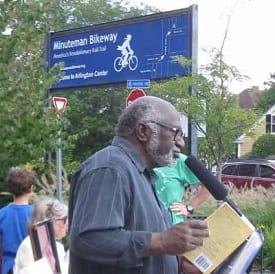 Charles Coe offers a haiku at Uncle Sam Plaza on Minuteman Bike Day. / Bob Sprague photo More Minuteman Bikeway users were counted on Saturday, May 18, than count for a single day since 2011.

Volunteers coordinated by town planning and and the Arlington Bicycle Advisory Committee tallied 1,037 users on Tuesday, May 14, and 4,865 users on Saturday, May 18, for a total of 5,902 people, a June 18 town news release says.

Cyclists made up the majority, at 55 percent of all users, followed by walkers, at 29 percent; joggers, at 11 percent, children in carriers , at 3 percent; and others, making up 2 percent.

Weather conditions were cold and wet May 14, which depressed numbers, while May 18 temperatures were mild with sunny skies, and thus thousands of people used the bikeway.

Despite challenging weather conditions at times, the counts show the bikeway is used daily for recreation, commuting and general-purpose travel.

The count that comes closest occurred Saturday, May 21, 2016, when 4,047 people were counted. The May 18 count is more than 800 people, or 20 percent, greater than this previous count. It demonstrates that the bikeway continues to gain popularity for a wide variety of user types at all hours of the day.

The town has conducted counts at different points along the bikeway since it was completed in Arlington in 1993. Since 2011, every year Arlington has counted users where the bikeway crosses Swan Place on a weekday and weekend day in both May and September.

Counts are conducted over a 12-hour period from 7 a.m. to 7 p.m. This information is submitted to the Boston Region Metropolitan Planning Organization, which has been collecting data about numbers of users of local bikeways and trails since 2007. These data can be used for a variety of purposes, including planning new facilities, targeting maintenance activities, and tracking use trends.

As the bikeway sees increased use, the town news release says, it is critical that all users share the path and stay safe. Remember to stay to the right of the yellow line when traveling, announce your intention to pass other users, and slow down to pass. Obey posted signage and be careful when crossing intersecting roads.

For more information, contact Daniel Amstutz, senior transportation planner, at 781-316-3093 or This email address is being protected from spambots. You need JavaScript enabled to view it..