100 'reclaim' Magnolia after graffiti tied to massacre left at park 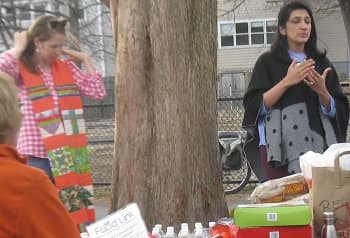 UPDATED, April 11: The day after a gunman killed 50 people and injured 50 others at two mosques in Christchurch, N.Z., white-supremacist graffiti fouled Magnolia Park in East Arlington, copying words the killer had shouted.

Scrawled in chalk was "#SubToPewDiePie or else." That is an obscure reference to a YouTube rivalry, but when the New Zealand gunman spoke the phrase in his live-stream of the massacre, it turned into a threat. When those words were left in Arlington, that threat targeted town residents who are Muslim, Jewish or of other backgrounds.

To make a public statement opposing the mid-March  graffiti, an estimated 100 people gathered Sunday, April 7, at a sunny Magnolia Park brimming with kids and families, perhaps unaware of why the town's Human Rights Commission had a table there.

Nada Siddiqui, who lives in Heights and attends ISBCC in Boston, termed the largest in New England, learned about the graffiti at Magnolia on March 16, a day after the New Zealand massacre, on Arlington Parents List Facebook group.

"As horrified as I was when I saw a picture of it uploaded to a local parents' FB page," she wrote, "I was disheartened to see that the online discussion missed the underlying bigoted message of the graffiti. That is the point of the far-rights' online messaging -- the targeted community as well as supporters of the hateful ideology understand the reference whilst the general public is distracted by its confusing nature."

She alerted town religious and rights leader, and an event in response was scheduled for March 31, but worsening weather delayed it.

At the April 7 gathering, the public learned from the acting chief that a report of the March 16 graffiti had not been filed with police and that, just that morning, swastikas were among the images drawn on the blacktop at the Bishop School.

The estimated 100 people, including a contingent of town police, at Magnolia heard the following:

-- The Rev. Cynthia Good, pastor at Calvary Church in East Arlington, called the incident an "opportunity to build bridges." She called for a "need to have a conversation [about] who we want to be .... This [April 7 event] is not counter anything. I'm feeling safe. Come walk with me."

She handed out a sheet, some of which is noted below. In connection with it, she added: "Talk to your children."

-- The Rev. Leah Lyman Waldron, pastor at Park Avenue Congregation Church, said she welcomes all faiths or no faiths, as she introduced speakers:

-- Andrew Jolin of Arlington read a passage from the Koran, about being good neighbors: "Be kind to one another."

-- Elissa Jacobs, a teacher who said she is Jewish, noted that Passover is due in two weeks. She called it "a time to proclaim freedom" and take action in that light. She reported the discovery of a swastika at Bishop that day and referred a reporter to Naomi Greenfield, cochair of the Human Rights Commission.

She added: "I came today because there is no absolutely no room or reason for hatred. I am of Jewish decent raised in New York City, and I know, all too well, the history of horrific actions brought about by those in power, through xenophobia hatred and ignorance and I will do my best to always support those dealing with hatred with words or acts of love."

-- Julie Flaherty, the acting police chief, said her department "will not tolerate any acts of hate and will prosecute any."

-- Siddiqui, who spurred the event, allowed the graffiti "may be kid prank, but who knows?"

Church of Our Saviour

"I need to let you know that a couple of Bishop neighbors were at the Bishop playground earlier this morning when they noticed inappropriate images drawn on the blacktop and on Crosby Street. These images were phallic in nature and others were swastikas.

"Immediately upon coming across these images, the neighbor transformed them into more, 'appropriate' images and called the Arlington Police Department, who took a report.

"This incident was then reported to me .... I have also been on the phone with Cindy Curran and Dr. Bodie, [who] has also been in touch with the Arlington Human Rights Commission.

"This is very unsettling to say the least. I'm now thinking about how to respond to those Bishop students who may have seen the images or have already heard about this and who may bring this up in conversation at school.

"My message that I have sent to the Bishop staff this morning is; this needs to be addressed in an age-appropriate manner. Teachers and staff will have the conversation with our students that will start like this:

"'Over the weekend, there were some disrespectful images/pictures drawn on the Bishop blacktop; images that are not true to our core values or RESPECT, RESPONSIBILITY, and REGARD. These images were very disrespectful to the Bishop community and any others who may have seen them.'

"Our younger student (k-2) conversations will obviously sound different than the students in grades 3-5, as they are able to hear and to discuss racism and anti-Semitic issues that our communities face."

How do we address this?

-- If someone tells you they feel 'threatened by a symbol or message, take them seriously and encourage others to do the same. It's terrifying to be targeted by hate-based messaging, and being doubted by people who aren't targeted only makes the experience more isolating.

-- Report graffiti and hate speech to the Arlington Police. They are committed to shining a light on hate incidents and, when possible, to helping those responsible understand and make reparation for the harm they've caused. Call APD Dispatch: (781) 643-1212.

-- Get trained as an Active Bystander by a group like www.TrueStoryTheater.com. Active bystanders are trained to safely intervene and stand with people targeted by public harassment. True Story Theater also teaches techniques for examining our own biases and for speaking up when friends, family, or coworkers make bigoted comments -- both of which help us dismantle the many -isms we all live with.

-- Counter hate speech with love. Research shows that censorship doesn't erase hate speech; only a deluge of positive speech does. If hate speech shows up at your school, ask the administration if you can plan a love flash mob or cover the school walls with positive messages. If a hate-based group comes to your community, hold a positive event across town at the same time. Donate to organizations like www.WeCounterHate.com and www.LifeAfterHate.org. Find more ideas here >>

-- Talk to the young people in your life about the impact of hate messaging. Behind many graffiti and hate speech incidents are teenagers parroting what they've heard for shock value or thrill. Having age-appropriate conversations with teenagers and even preteens about the real harm done by incidents like this one can help steer them - and their peers - away from such seemingly victimless "pranks." Find suggestions here >> (addresses 2016 election rhetoric; adaptable to other situations).

-- Monitor where the young people in your life spend time online. Channels like PewDiePie's may not always showcase explicitly racist or hateful content, but the comments sections are recruiting grounds for white supremacist groups.

-- Support local initiatives that give people access to community and invite them into meaningful relationships across racial, faith, or other differences. Research consistently shows that isolation, lack of purpose, abuse, and consistent exposure to prejudiced ideas are among the best predictors of people (particularly young men) joining hate groups; conversely, robust social networks, a sense of meaning, access to mental health services, and friendships with people of other identities help keep people out of such groups.

-- Educate yourself on white supremacist messaging and recruitment practices. Hate culture increasingly lives online and is always evolving. No longer just the KKK or skinheads covered in tattoos, some groups present as clean-cut, college campus fraternities or back-to-the-Iand mom groups. While it's impossible (and distracts from the larger issue) to try to keep up with all white supremacist messaging, you can familiarize yourself with terms and general trends at sites like www.splcenter.org.

This news summary was published Wednesday, April 10, 2019, and updated April 11, to correct a name.