Parishioners protest in public after celebrating in private 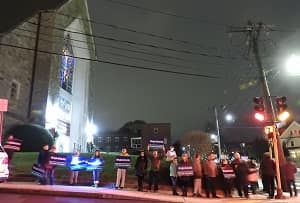 Members of St. Athanasius the Great stood in front of the Greek church on Sunday, Dec. 3, holding signs seeking the return of the Rev. Nicholas J. Kastanas, ousted last July.

The protest followed celebration of a reunion event called Advent Glendi (Greek for a party) by nearly 300 parishioners. It was held at an unidentified location after a Serbia church in North Cambridge at first agreed to the event and the backed off.

Information about the event is detailed in an Oct. 3 blog entry titled "Neither Down Nor Out: The 'Secret' Glendi," by parishioner Ioannis Moutsatsos.

"[H]ome cooked Greek appetizers were delicious, the music and singing were fantastic, the hall expertly decorated, the raffle prizes dazzling!" he wrote. "But most especially, the people, the hugs, and the re-union of hearts and minds were unprecedented!

"Some of us had not seen each other since the 'summer of unfortunate events' when Metropolitan Methodios ravaged the thriving community ...."

Moutsatsos wrote that the "Advent Glendi committee worked hard and diligently to secure a venue location that would be conveniently located, inexpensive, welcoming and large enough ...." That led to the parish hall of the St. Savas Orthodox Church, Cambridge, whose representatives agreed to host the event and prepared a contract.

Soon after invitations went public, he wrote, the Metropolis of Boston, through chancellor Barbas, "decided that it was time again to flex its muscle against the event. The Serbian church despite being apologetic, told us that given the pressure and strong objections of the Greek Metropolis they would be unable to honor the contract and the glendi would need to find an alternate venue."

A location was found, the event was communicate by word of mouth and "Luckily, the 'stealth' approach worked!" he wrote.

OPINION: Aug. 2, 2017: To Greek church leaders: Get past social media, come together