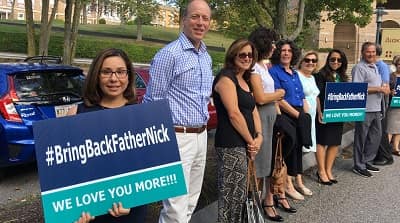 UPDATED, Sept. 20: An active group of parishioners continues to keep up the pressure on Boston Greek church hierarchy aimed at bringing back the Rev. Nicholas Kastanas, ousted in late July from St. Athanasius the Great without clear explanation after nearly 28 years.

Following a peaceful rally Sept. 13 that drew 80 people in Brookline, two key sources who support returning the priest provided background and what they see as next steps in the process.

"Fr. Nick considers St. Athanasius his family," wrote Ioannis Moutsatsos, representing the Orthodox Stewards for Justice and Reconciliation (OSJR), which calls itself a self-organized group of parishioners and friends of St. Athanasius the Great. "We know that he would like to return, and that's why we continue our #BringBackFatherNick campaign.

The group does not expect the road ahead to be easy.

"However, we also understand that unless we persuade Metropolitan Methodios [the Boston head of the church] to reverse his decision to remove Fr. Nick, the only other remaining 'ecclesiastical tools' are A) a direct order from the Patriarch, or B) a reversal of Methodios decision by an ecclesiastical court (with another presiding Metropolitan)."

Moutsatsos added his own views in a Sept. 18 email: "Personally, I believe that if Methodios truly wants to preserve St. Athanasius as a living community, he has to replace the parish council with a set of new members that are willing to take 'the wheel of the Titanic,' so to speak, and work to reverse the destructive spiral the community has entered.

"Correcting the many issues that the current PC [parish council] has created (financial, educational, communal) will require actions of justice, love forgiveness and courage."

Suggesting that "the Metropolitan can decide to be part of the solution by restoring Fr. Nick to his proper place," Moutsatsos wrote, "this action would help to repair the torn fabric of the St. Athanasius community.

"Alternatively, the Metropolitan can insist on his current decision and preside over the destruction of one of the most active parishes of his Metropolis.

"History will be watching and will record whether he acted with courage or he failed to do his job preserving the unity of Christ's Church that he took an oath to preserve."

As to OSJR, he wrote that the group formed "out of the simple necessity to provide a voice for the many parishioners that otherwise would have trouble airing their concerns, hopes and frustrations."

He wrote that the current parish council "has silenced all dissenting voices through total control of the social media sites of St. Athanasius, and the one-sided presentation of issues (mostly read from the Metropolis script). OSJR provides balance, analysis and opinions that has input from many people, all free to express their thoughts and feelings."

She wrote that the Metropolis did not respond to the event, nor did Chancellor Theodore J. Barbas.

"Yes, the gathering was very peaceful," she wrote. "We all stood quietly holding signs and wearing T-shirts that said #bringbackfathernick. There was give or take 80 parishioners from Saint Athanasius church there.

She added that New York Archbishop Demetrios. was there, and some parishioners were able to speak to him after the service. Moutsatsos wrote that he spoke with one of the three people who talked to the archbishop and was told he was "too busy to mediate between the parishioners and the Metropolitan."

She wrote that about 40 supporters returned with signs to a Greek food festival at the Metropolis in Brookline on Sept. 16.

OPINION: Aug. 2, 2017: To Greek church leaders: Get past social media, come together