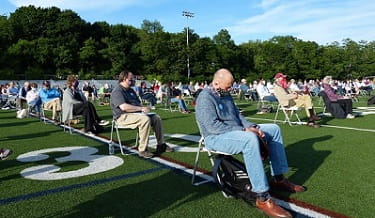 Town Meeting members bowed their heads in a moment of silence at Peirce Field on June 15. / Sue Doctrow photo

Not every moment of the postponed meeting, reshaped by the pandemic, was sweet: Two challenges to police spending from members of Arlington Fights Racism reflected the times in which worldwide protests opposing police brutality and racism have touched Arlington nightly since late May.

Jordan Weinstein (21) asked why raises for ranking officers were more than double that of patrolmen. Finance Committee Chair Al Tosti said some unions have reached a negotiated agreement, but the patrolmen’s union has not settled.

As former Select Board member Dan Dunn explains in his blog, Town Meeting can modify or approve a budget bottom line, but it has no legal authority to change line items.

More photos, including a shot from a drone >>

Weinstein asked to make a motion about the raises. Moderator John Leone at first said he could and then changed his mind. He called the motion out of order, because it was not presented in writing by the preceding Friday, as he had required.

Later, under a discussion of the capital budget, Weinstein and newly elected member Elizabeth Dray (8) raised questions about police vehicles. Dray, whose daughter has led nightly protests in the Center, asked about the vehicle replacement cycle.

Police Chief Julie Flaherty said vehicles are often replaced every three to four years, and motorcycles are longer than that. In addition to one parking-control vehicle, a second is to be added in 2025.

As to the town budgets in general, Tosti discussed the process of revising the fiscal 2020 budget after the pandemic broke. The budgets are larger than in fiscal 2020, but the increase is smaller than had been planned. He noted the projected June 2023 override, saying that it would increase taxes 16 percent, a number that officials aim to reduce.

Also of note, as the sun set, casting members' shadows across Peirce Field, were education budgets.

Sheri Baron (7) asked about the 10-percent cut to the school budget, about $484,000, based on an agreement in March with the Fincom. School CFO Mike Mason said the amount is a reduction in the budget increase and that there have been no layoffs.

John Leonard (17) noted a recent break-in at Arlington High School and asked about security as the school is rebuilt. Superintendent Kathy Bodie said high-resolution cameras were being added, and some security protocols were changed.

Under Article 61, Superintendent Ed Bouquillon discussed the Minuteman Regional School District budget. At the new, which opened last September, he expects this fall only 14 out-of-district students as well as 650 students (the school was designed for 628). He said there is a waiting list.

Beth Ann Friedman (15) asked about reduced revenue from the Ed Burns Arena because of Covid-19. Pooler said recreation plans to reopen the rink this fall reopen, which would increase revenue. After some layoff this spring, the town has been able to balance the rink budget, he said.

All budgets were approved unanimously by voice, with no standing votes required. Town Meeting voted as it did before electronic voting was introduced in 2014, because clickers were not used June 15.

Thanks to a number who served

Leone thanked Tosti for 27 years of chairing Fincom, and he received a standing ovation.

Under discussion of capital planning, committee chair Timur Yontar thanked Charlie Foskett for chairing for three decades, as well as for service by Brian Rehrig and Steve Andrew.

Community Preservation Act Chair Eric Helmuth reported that some projects were delayed in deference to the pandemic. The programs advanced are urgent or already approved by Town Meeting.

Finance articles under the second consent agenda were approved.

The Town Meeting was dissolved with a motion from Tosti, noting it was his last meeting.

So why was the meeting -- in terms of length -- a shadow of its usual self?

Responding to the pandemic, the moderator and other officials collaborated to seek efficiency. At the start of the meeting, Tosti moved various motions within the received reports as the main motions. As Dunn explained in his blog, "This is actually a very powerful motion. It means that each article we take up has a motion already on the table -- the motion that was made by the respective committee. That is what makes the various hearings of the Select Board, ARB, Fincom, etc. so important. Those hearings are what set the starting point of each article."