Short-term tenancy for former DAV could lead to co-working 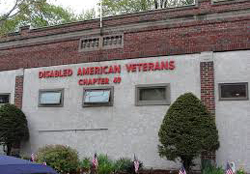 In unanimously supporting a plan to sell the town-owned former Disabled American Veterans Club at 1207 Mass Ave. at some point, selectmen on Monday, Nov. 24, heard the town manager suggest inviting those interested in using the vacant space for co-working.

Town Manager Adam Chapdelaine said that that when selectmen heard ideas about using the space, he was "inspired by the public."

The board's 5-0 vote approved recommendations from Chapdelaine. They are:

-- Issuing a request for proposals aimed at short-term tenancy. That would be an initial six-month lease, with the potential for one renewal no greater than 12 months; and

-- Filing a warrant article for the 2015 Annual Town Meeting requesting authorization to sell the property.

"This sale would be pursued in coordination with a potential lease, and not be executed until any such lease is completed," the manager's Nov. 20 memo says. "It is recommended that the proceeds from a sale be used to offset future capital needs."

Per previous discussions, the latter refers to using the money to help pay for rebuilding Stratton School and Arlington High School.

In response to comments by Selectmen Dan Dunn, the board requested that Town Counsel Doug Heim and the manager craft the RFP with the highest degree of flexibility regarding the renewal term of any potential lease.

A number of suggestions were made to selectmen on Oct. 27, as 10 people spoke.

Alan Jones, vice chair of Finance Committee, provided the evening's most detailed proposal -- called co-working, aimed at using the site temporarily for no or low cost as a shared workspace and gathering spot for local entrepreneurs and creatives.

Co-working has been successful in Somerville, turning older manufacturing areas into such innovation hubs as Artisan's Asylum. Read a story about Arlington's attempt to bring together these forces here >>

Supporting Jones's idea was town resident Bill Harrelson of Accordare, who said he would be prospective tenant. He said it would aid the small entrepreneur who is not funded with venture capital.

Eric Love, who runs a program for middle and high school kids called LARP Adventure that appeals to imaginations, said he looked at the DAV when veterans were removing pictures from the walls. "It was heartbreaking," he said.

Of 50 artists with whom he works, he said 12 are ready to sign agreements for a co-working space. He agreed that veterans do need space, and his effort might provide an "intergenerational bridging."

In discussion following the comments, Selectmen Joseph Curro confirmed through Heim that a two-thirds vote of Town Meeting is required on any DAV recommendation. After that, the state attorney general would have to approve the action, possibly next August.

Because of the length of time involved in the process, Curro said the "trial period" suggested by Jones might be doable. No selectmen expressed any favored suggestion.

Asked about the property's cost, Chapdelaine said Nov. 24 said a confidential appraisal has been requested.

See some inside photos >>

Backgrounder: How co-working goes in Vermont