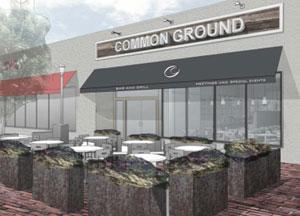 The board put off addressing outdoor seating and alcohol use after the opening of Common Ground, forecast for December or early January.

Two residents asked for limits on the pub's hours and seating. Four spoke in favor of the plan.

Owners Bob and Laurie O’Guin, of Newton, who own Common Ground Bar & Grill in Allston, expect to spend $225,000 to improve the location of the closed Gemma. Bob O’Guin said the Arlington spot will be lower key than his Allston one. He said a three-piece jazz ensemble would like be the largest performing group.

Number of patio seats in question

A request for 28 seats on the sidewalk in front of the proposed restaurant was delayed. The number appeared to be unworkable in the allotted space, as neighbor J. Michael Ruderman said is his appeal to deny outdoor seating.

Selectmen also must decide whether to permit the serving of alcohol outdoors. That was approved for Menotomy Grill, but its access to outdoor seat is through the East Arlington pub.

Bob Mirak, managing partner of the Legacy Apartments, across Mass. Ave., said a petition circulated among his residents showed 80 opposed. He called Common Ground's request to set a midnight nightly closing time as "setting a precedent" in town.

Selectmen disagreed; Menotomy Grill is open until midnight. Town Counsel Juliana Rice said any restaurant in town with a liquor license is permitted to close as late as midnight, though many close at 10.

Mirak had questions about amplified music, and selectmen addressed them. The license allows amplified music in the back room, but none in the front dining area.

Selectman Stephen Byrne suggested that fold-out windows be closed at 10 p.m., and Chairman Dan Dunn agreed. Leone noted that the windows would be closed eight months of the year.

Once the board considers outdoor seating, it is expected to end at 10 p.m., a suggestion recommended by Selectman Joseph Curro Jr.

In opposing the scope of the plan, Ruderman, a Precinct 9 Town Meeting member, asked the board to disallow outdoor seating and all amplification as well as require an 11 p.m. closing and hold off considering a midnight closing for at least six months to see what the neighborhood's experience is.

The board could face the latter requests when it takes up outdoor seating, likely next year.

The four who spoke in favor of the proposal did so enthusiastically.

Cathy Zolner, a board member of the Chamber of Commerce and business owner, said Common Ground would add vitality to the Center. Moving to town from Belmont in 2005, she said she did not expect at the time to have Armstrong Ambulance as a neighbor, but now that she does, she has learned to adapt.

As a number noted, the late closing hour would be in concert with those leaving a show at the Regent and seeking a bite or drink.

O'Guin emphasized that he wants to spend his own money to help upgrade the plaza. "I hope to give back to the community," he said.

To be considered later are seating and a request for an awning, which was not properly advertised.