UPDATED, Feb. 19: The town seeks a repeat of its successful beer garden last summer, as the Select Board on Feb. 11 considered, and later tabled, a request for proposals seeking bidders for this summer.

Aeronaut Brewing Co. of Somerville ran the 2018 events and was reported to break even.

The next round is expected to be longer, starting June 1, instead of in July, and applicants face a $1,500 fee, instead of an initial $400, as last year.

The town has proposed that the beer garden run Saturdays, with a Sunday rain date, through Sept. 29.

Newly filed state legislation could curtail this summer's schedule if it is adopted. State Sens. Ed Kennedy and Nick Collins have filed a bill that would limit to 14 the number of one-day licenses to run outdoor beer gardens. The Boston Globe reported Feb. 11 that the restaurant industry is pushing the measurethat the restaurant industry is pushing the measure. 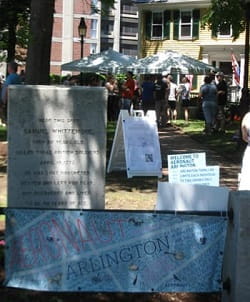 Asked about its potential impact on Arlington's effort, if the legislation is adopted, Ali Carter, town economic-development director, wrote Feb. 12 that a 14-license cap means the gardens would end here Aug. 31.

As the laws now stand, 30 licenses a year are permitted, and the town could carry out the series as described in the request for proposals, she wrote.

Linda Shoemaker, executive director of Arlington Center for the Arts, said she hopes to work with the beer-garden vendor during Porchfest, set for noon to 6 p.m. Saturday, June 8. As it was in 2018, the headquarters of Porchfest is planned to be in Whittemore Park in front of the Dallin Museum, the same location as the beer garden.

Two members of the Select Board raised issues with the request for proposals, as written.

Joseph Curro Jr. offered his concern about restricting access to those 21 and younger to the entry to the event.

Clarissa Rowe, who manages a landscaping company, suggested treating the well-trod grounds at Whittemore Park following the beer-garden season. She asked that the vendor pay to have the lawn aerated at the end of the season.

John Hurd mentioned that he understood that Aeronaut had broken even last summer. A number of the scheduled gardens were rained out.

Town Manager Adam Chapdelaine said he preferred reworking the measure and returning to a future board,

Read the proposed RFP, which will change >>

This news summary was published Wednesday, Feb. 13, 2019. Max Fritsch, YourArlington's Arlington High School intern, contributed to this report. It was updated Feb. 19, to add a link