A day for 'Robes,' as field renamed, and many offer words of remembrance 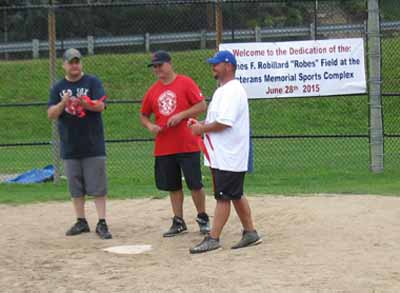 On the day that Red Sox pitching legend Pedro Martinez was inducted into the Baseball Hall of Fame, Sunday, July 26, Arlington's Summer Street field was renamed for "Robes."

In an emotional, memory-filled hour and a half, a parade of speakers who knew James F. Robillard, inducted into Babe Ruth Baseball's Hall last year, showered words of tribute. The extended ceremony, scheduled for June 28, the date that remains on the banner at the field's backstop, was postponed because of rain and Robillard's health. He died July 6.

Son Joey Robillard offered an honest memoir that concluded, as he stifled tears: "Today is the only time I played on this field without my father."

Joey, who played for his dad, recalls his young baseball career beginning as a go-to guy -- as in "Get me a coffee at Friendlies." He imitated his dad's gravelly voice, recalling a time when the restaurant was near North Union field.

Later, when he was a player, his dad made the same request. When the boy questioned it, Robes told him: "'Yeah, you're like a secretary and a player.'"

An estimated 50 people seated in chairs on the infield and on the embankment near Summer heard words that were perhaps a revelation to some.

Steve Robillard played for his brother from 1966 to '68 on a championship team and Ken Donnelly, now a senator, was on the team. Donnelly was among those listening.

Steve noted his brother's leg issues, starting at age 11, and said: "He could never play the gamed he loved."

But Robes found other ways to play the pastime.

To the delight of those involved in disputes over obscure baseball trivia, he'd get late-night calls. His answers settled bets.

"He had a million baseball cards," Steve said. He would use them to draft made-up teams. He'd cut up small pieces of cardboard to reflect game's never-ending plays, and then he would play entire seasons.

Jim Palmer, Robes's longtime friend and coach of a frequent opponent, the Astros, who organized the event, introduced speakers as emcee.

Al Ticehurst, the Arlington Babe Ruth leader who served its board with Robillard for 20 years, called Robes "a character with character." and "a continuous story." Robes's focus, he said was that "all would play regardless of the money."

He said donations would go to field renovations, including improved lights and fencing. Robes T-shirts, designed by Jen Gray, were selling for $20. Money was also collected via a raffle.

Don Vitters, a longtime Park & Recreation Commission board member who served with Robes starting in 2007, said Jim's emphasis was on field access and compliance with the Americans with Disabilities Act, which the commission fully supports.

Vitters noted that the fall recreation brochure is dedicated to Robillard. He said Robes had not known until near the end of the process that the field would be renamed for him.

Selectman Diane Mahon said she met Robes in 1998 during a campaign to ease tensions among sports teams about issues that included field access.

She cited an effort that Robes supported -- building the Cutter School playground through donations in remembrance of Nicole Reinhart, who died in a cycle-racing accident in town in 2000.

Mahon called Robes "gruff" and a "really good friend." She walked from the microphone weeping.

Palmer recognized Jocko Ryan, who did not speak but gave a trademark smile.

Kyle and Ryan Hood, brothers who played for Robillard, added their thoughts.

Ryan, who played seven years for him, said, "He touched everyone here."

Jeff Chalmers called Robes "an amazing man ... all about family .... He told you to go have fun."

John McGah, who played for the Rangers in the 1980s and performs in band called The Wait, accompanied on guitar his own song. It has the refrain "I carried you with me" and concludes: "Hey Robes, I carried you with me ... to be the best man I could be."

He also performed his rendition of Springsteen's "Glory Days":

I had a friend was a big baseball player
back in high school
He could throw that speedball by you
Make you look like a fool boy
Saw him the other night at this roadside bar
I was walking in, he was walking out
We went back inside sat down had a few drinks
but all he kept talking about was

The following was provided by Vitters, of Park & Recreation. It is written by Joe Connelly, director of Arlington recreation:

Jim Robillard's contributions to the Town of Arlington were many. Jim was a former Town Meeting member and was a member of the Park and Recreation Commission from 2007 until his passing.
Jim's volunteer efforts on the baseball diamond and his commitment, dedication, and love of everything Arlington Baseball separated him from the rest.

Jim started coaching in 1961 with the Arlington Baseball Association's Pirates and has never stopped coaching in over 50 years. Jim coached his beloved Arlington Pond Rats and over the years took his team to the Babe Ruth World Series five times.

Off the field Jim served as the President of Babe Ruth baseball and in the early 1980's was instrumental in having the lights installed at Summer Street Field.

Last year Jim received the ultimate honor in Babe Ruth being inducted into the Eastern Massachusetts Babe Ruth Hall of Fame. In Jim's inductee acceptance speech he stated, " ... it has been my honor to serve the community."

I think Jim has it backwards. It was Arlington's honor to have a person like Jim Robillard serve and volunteer in our community.