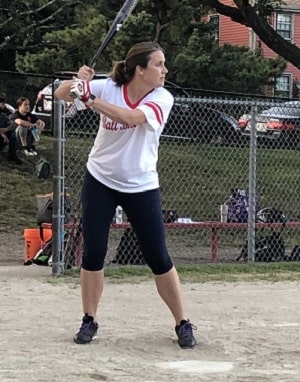 Drive past the Buzzell playing fields, next to Summer Street, on any Thursday night this summer, and you’ll witness Arlington’s first-ever adult women’s recreational softball league in action.

The “Katherine Wall” league is in honor of Wall, a three-sport Arlington athlete -- softball, soccer and hockey -- who succumbed to breast cancer in 2013 at the age of 26, and the daughter of Ben Wall, the men’s leagues head umpire. “It has been my dream to have a women’s league in Arlington,” he says.

This past June, Kristin McKenzie, a physical education teacher at the Dallin elementary school, started the league. It already has an estimated 150 players.

“I’d always wanted to start a women’s league in Arlington because I live in Arlington, and thus it’d be very convenient,” she says.

“Katherine was an incredible athlete, and one of my role models growing up, so it was a no-brainer to name the league after her. There’s no doubt in my mind that if Katherine were here today, she’d have had this league up and running a long time ago.”

Player Kaitlyn Morse says, “This is a great cause for a legend here in Arlington, and what the whole softball league is for.”

The league has been such a big success that McKenzie is starting a coed league this fall. “The whole experience of starting an entire league, and getting it up and running as successful as it is, has been an amazing experience, and I cannot wait to keep this league going for as long as I possibly can,” says McKenzie.

The regular season ends on Thursday, Aug. 29, and the playoffs start the week of Tuesday, Sept. 3.

Before starting the league, McKenzie had a strong background in softball. She played Arlington youth softball, was on the Arlington High School varsity softball team for four years, and then played an additional four years in college.

“I’ve played baseball my whole life. Growing up, I played for the Arlington Little League program and then switched to softball one year before high school just to get used to softball over baseball.”

The majority of the league players are from Arlington, which enables women who live here to get to know one another.

“I was excited to learn there was going to be a league in Arlington,” says Laurie Key, a team captain and Ottoson middle school lead counselor.

Jordan Toomey, a former Arlington High varsity team softball player, says, “I like playing because it reminds me of playing with my high school team.”

McKenzie adds: “My favorite part about this Arlington league is getting to play with -- and also against-- a lot of my friends. But even more so, I love all the women I’ve met along the way. I have many women on my team and from other teams who I’d never met before, and we’ve already become friends.”