Artist who etched life in leather shows AHS students how 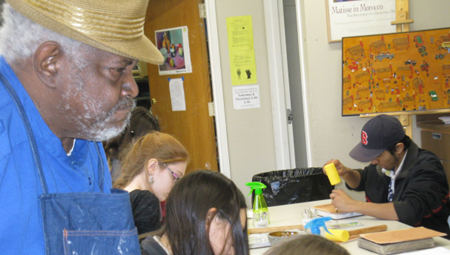 'Art aims to evoke the senses ... it shows an awakening. You don't always get that with pen and paper.'

A staccato chorus of mallets tapped or pounded. Wet leather glistened. Lean close enough, and you could smell the material.

Twenty Arlington High School students in the art class of Nancy Muise turned their attention from painting to a more hands-on kind of creation introduced in a weeklong series of workshops led by Winfred Rembert.

"I'm the only person in the world who does this," Rembert said in an interview, seated near toiling students. He was referring to etching his life into leather.

The canvases of the unlikely medium, large and small, explode in a range of human drama, from the joy of gospel to the pain of a chain gang. That is a pain Rembert knew firsthand when he was in prison -- and before -- in his native Georgia.

Pain expressed on leather -- and in words

It is a pain expressed the workshops' first day in Nicole Eidson's creative-writing class. Urged to write from the heart, student expression brought many to tears, Rembert included.

The workshops, supported by $6,200 in grants from three Arlington organizations, involved an estimated 200 students. They include those from Metco, 100 art students plus those in U.S. history and English classes.

"They have to find a story to tell," Rembert said in Muise's class on Thursday, March 27. "Something that touches them."

Rembert, 67, has been transferring some of his indelible past to tanned leather since 1999, but the genesis of his art dates to his seven years in prison much earlier.

Learning to tool leather from another inmate, he said prison guards allowed him to develop a craft into an art, because "it didn't present a threat." His hand tools, some of which he made, had to be checked in and out.

What led to his 27-year prison term, later shortened, is a harrowing tale that begins in the 1960s, and he described it in telling detail here >>

His own gift, his wife's push

"I always had a gift," he said, explaining his penchant for artistry.

For the direction his canvases take, he credits his wife, Patsy.

"We long told stories around the table with family members," he said. "One day, his wife, said, 'That's it -- tell stories!'"

And so, in leather, he does.

"We were oppressed," he said of his people, "and we still found a way" to express ourselves.

His favorite work? He hesitates a bit and names "The Struggle," a 2010 work. In it, he puts well-known African-Americans -- President Obama, Oprah Winfrey, Bill Cosby -- in a field picking cotton.

A work he wants to create, "The Sweat Box," would portray his experience of solitary confinement: No room to sit, lie down or fully stand. "You pee on yourself," he said.

Asked why he was put there, he said simply, "Laggin'." That is, not doing what a guard wanted.

His understandable resistance while young has given way to a broader patience.

A survivor of an attempted lynching, he went on to marry and have eight children, ages 40 to 26.

Born in Americus, Ga., nine miles from Jimmy Carter's Plains, he was invited to a luncheon by the former president last year celebrating 50 years of the civil rights movement.

As we talked, mallets kept tapping, some pounding, as students worked their 8-by-10 leather creations. They were trying to do in a week what it takes Rembert much longer to accomplish.

Workshops encourage students to use hands

Muise, one of the art teachers involved, called the workshops "refreshing." She said it lets students to use their hands and work with tools in ways that are much less abstract than usual painting exercises. 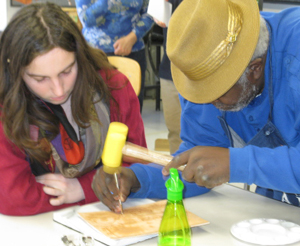 Rembert gently demonstrates his mallet technique. The hands-on week spurred in her "an a-ha feeling," she said.

Hoping students would connect their art to a snapshot, a moment in time, she asked them: "What's causing you frustrations?"

An art teacher AHS for 17 years, she said students' initial reactions to the workshops was "guarded." As she said that, a student working next to her, Ben Boyajian, a sophomore, said: "I like it." He was fashioning on leather a guitarist performing (Ben plays guitar).

"Art aims to evoke the senses ... it shows an awakening," the teacher said. "You don't always get that with pen and paper."

At the same table, sophomore Matt Carney worked away on his leather depiction of a car he favors, a Chevrolet Monte Carlo, tilted at a rakish angle.

Not far away, Corshayla Jones, a junior, who lives in Boston's South End, portrayed her grandmother getting puppies. The joy of her smile was not yet colored in, but you could see it coming along.

"I love my grandmother," Jones said, "and she loves dogs."

Organizers of the project

Who orgnized what was called "The Winfred Project"? Who helped attract this alternative artistic energy, to Arlington from New Haven, Conn., where Rembert lives and teaches at Yale?

One was David Ardito, interim K-12 director of visual art for the Arlington public schools. He was involved with getting grants that made it possible.

Ardito said the workshops were 12 to 18 months in the planning. They stem from the first showing of "All Me," which dramatizes Rembert's life and art, at the October 2012 Arlington International Film Festival.

That night the showing "lit up the audience," he said, and led to the project, which he called "magnetic."

He praised volunteers Linda Yee, who works with the film festival, and parent Eileen Murphy-McNamara, an architect who put together a time lime of Rembert's life and work. She also produced journals for kids to jot workshop thoughts. Each has separate covers of Rembert's art.

Of course, the overall project organizers, who also helped out during the workshops, were Alberto Guzman and April Ranck, who founded the film festiva. They seem to be everywhere.

The key element of the project was its interdisciplinary nature -- with four visual art classes, two creative-writing classes (Rebecca Walsh-Bradley and Eidson) and one U.S. History class (Melanie Konstandakis-Schwartz).

Eidson wrote to Ardito: "Thank you so much for inviting us to participate in this project. Winfred is unlike any man I have ever encountered and I was moved (quite literally to tears) this morning [Monday, March 24].

"My students have individually come up to me to talk about their experience this morning and every single one of them thought it was one of the most powerful 80 minutes they have ever experienced in a school, or life setting."

Rembert was honored at a Town Hall reception on Saturday, March 29. He regaled an estimated 60 attendees with an extended rendition of his life's story. As it closed, all rose to applaud.

Many examples of his work >>

This story was published Sunday, March 30, 2014, and updated the next two days to add details.