BeJazzled, alums touch down at AHS 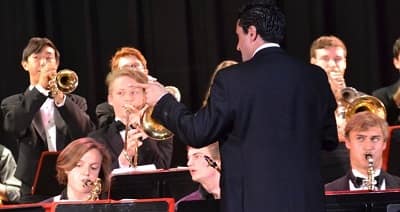 Landing at Arlington High School on Friday, June 8, at 7 p.m., this biennial jazz extravaganza features the award-winning AHS Jazz Band, the Ottoson Middle School Jazz Band and upwards of 40 AHS Jazz Band alumni, who will travel from near and far to get in the groove. It’s the biggest jam session this side of the Charles River, culminating in a finale with more than 100 musicians onstage for a supersized rendition of “Watermelon Man.” Be there or be square!

Featuring such perennial favorites as “The Chicken,” “Birdland,” Chameleon” and “Mr. Stern” as well as such new additions as “Some Skunk Funk” and “Revelation Is Here,” this program has something for every jazz lover.

When the energy of dozens of alumni combines with that of the high school and Ottoson jazz bands, there’s no doubt the joint will be jumpin’.

Among the alumni scheduled to perform are Dan Maser and Guy Zagami of the graduating class of 2007. Both have participated in every BeJazzled since AHS instrumental director Sabato (“Tino”) D’Agostino founded the event in 2003, when they were middle schoolers. Maser, who plays piano, vibraphone and clarinet, is now a postdoctoral research fellow in the physics department at Williams College. He notes that “being part of the AHS Jazz Band was an incredibly rewarding experience. I grew a lot more as a musician than I would have otherwise.” As a sideline, he is a clarinetist with a Dixieland band that he described as playing for events in North Berkshire County a couple of times year. “I’m looking forward to seeing alumni I used to play with and don’t typically see,” Maser noted.

In 2007, jazz band members show how they feel about being in Italy. Guy Zagami is at extreme left. At right side in white hat is John Coglianese. Dan Maser is to John's right in blue hat.

According to Zagami, a percussionist currently working in e-commerce, “the jazz band WAS my AHS! To this day when I consider what I’d like to do to make a difference in my community, the first thing I think of is what I can do to help AHS Performing Arts and the jazz band in return for all they did for me in my formative years.”

He keeps his musicianship active by playing in two bands; one is called the Motivated Sequence, which he described as “a local indie group,” and Salimblues, which combines Italian rock and American blues. Zagami noted that the latter is “a unique fusion -- definitely Tino D’Agostino inspired.”

Trumpet player John Coglianese, also a 2007 graduate, is returning to AHS having just earned a Ph.D. from Harvard in political economy and government. Noting that this will be his fourth BeJazzled, he said, “It’s worth it to return to AHS to see everyone again; the concert is always a blast.” He’ll be performing in “some of the BeJazzled classics such as ‘The Chicken,’ ‘Mr. Stern’ and ‘Birdland,’” but noted that his favorite piece is “Watermelon Man” because “it’s a great time when everyone joins in.”

Current jazz band members participating in BeJazzled include trombonist Amy Cunniff and trumpet players Sam Kim and Keegan Moseley, who are all graduating seniors. “Before I joined the AHS Jazz Band,” said Cunniff, “I really didn’t like playing the trombone, and I wasn’t very good at it. Being around older, more serious musicians has helped me grow as a musician and as a person.”

This will be her third BeJazzled, having participated in the concert as an eighth and 10th grader. She said she looks forward to “seeing all the alumni and to playing ‘The Chicken’ because it’s our classic jazz-band song.”

Kim’s experience in BeJazzled started in 2016, which was also his first year in the jazz band. “My favorite tune is ‘Birdland,’ Kim said, “but we play everything with a ton of energy and enthusiasm, so it’s hard to pick a favorite. I think of the band room as a sandbox that interested kids can play in, and I’ve learned that making music comes from the soul. You have to feel it within you and around you by playing it with others.”

Like Cunniff, this is Moseley’s third BeJazzled. As a middle schooler, he said, “it was especially inspiring to hear what great musicians the high schoolers and alumni were. Just watching them made me focus more on my playing so that someday I would be able to play as well as they did.”

His favorite piece on the program is the “The Mad Hatter Rides Again,” which, he noted, is “always a blast to play because of how funky and catchy it is and also because of the uncommon time signature of 17/8, which is like a breath of fresh air to me. So many of my friendships and best high-school memories were made in the band room. I’m even rooming with one of our bassists at UVM [University of Vermont] next year.”

Tickets are $10.  Free admission for children under 13.

Tickets can be purchased via e-mail, by phone, at the door, and at www.MKtix.com.

For information, call: 781-316-3660 or e-mail: This email address is being protected from spambots. You need JavaScript enabled to view it.


“It’s kind of amazing that this is the 15th anniversary of BeJazzled,” said D’Agostino. “Organizing the concert is extremely challenging,” he conceded, “but when I see so many musicians onstage sharing their love of music and AHS, it’s priceless.

“Some of the alumni went into music, some haven’t played their instrument since they graduated, and yet they still want to come back. It’s wonderful to see their smile, their energy, and how proud they are of their lives and careers.”

The commitment to jazz lives on in the current band, which completed a successful concert tour of Italy and Switzerland this past February. “They had the opportunity to play every day in Europe,” said the director, “and that really helped their cohesiveness; at this point the band is very tight.” Having conceived of BeJazzled as a way to dedicate an entire evening to jazz, D’Agostino noted that “the ‘fire’ is still going because of the willingness of these musicians to play at such a special event.”

This news-feature by YourArlington freelancer Carla DeFord was published Sunday, June 3, 2018, and updated June 4, to add a photo as well as June 6, to a list.