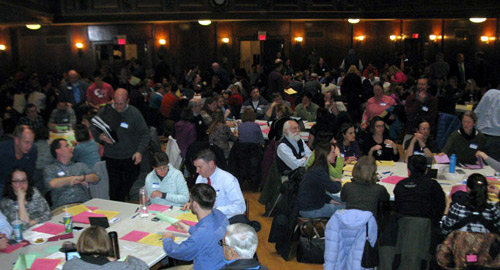 Overall view of pondering throng at Town Hall on Jan. 7.

UPDATED, Jan. 12: The chaos of Arlington democracy was on full display Thursday, Jan. 7, at Town Hall, where a crowd swelling to more than 200 offered a cascade of ideas about how to address expanding enrollment.

The suggestions from a mix of everyday citizens and recognized leaders ranged from one that drew chuckles -- siting a school at Spy Pond (whether it was to be a floating classroom was not clear) -- to the serious -- the possibility of an debt-exclusion override sooner rather than later.

In between, residents grappled with how many buildings, what sizes they should be and how grades should be configured, among many matters.

At the conclusion of nearly 2 1/2 hours of "visioning" session, or brainstorming for the schools' future, organizers produced a list of priorities the public expressed (from most to less mentioned):

6. A consistent experience throughout the town

8. Arlington Center for the Arts

To provide a general idea about the makeup of those who drew these conclusions, organizers asked the crowd before starting for Town Meeting members to stand. About 40 did. The throng was also asked to raise hands if he or she had lived in town five years or less. Perhaps 20 percent did.

Thus, behind this list were intent faces, familiar and new.

"Wow, look at the passion for education in Arlington," said Dr. Jennifer Susse at the outset. The School Committee member was the prime mover in making the Town Hall exercise happen.

She said the situation began last August as an "enrollment crisis" -- a phrase use in an Advocate headline -- and "now we're talking about 'challenges'."

To help deal with the variety of questions raised, she introduced Stacie Smith, an East Arlington parent who is a senior mediator at Consensus Building Institute.

Smith tried to set the tone and broaden the conversation with these questions: "What do we value, what do we want to preserve?"

Her suggested ground rules: be open, constructive, respectful and concise.

Superintendent Kathleen Bodie provided an overview about enrollment: After up-and-down years from 2000 to 2010, student numbers were flat in 2010 and started to rise in 2011, an issue known after the override that year. 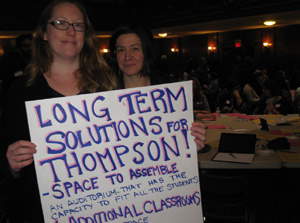 Among many numbers she presented were these: By 2025, the high school expects to have more than 1,600 students. In the current school year, it has 1,253. Ottoson is expected to grow by 200 students in the next five years; the current population is 1,127, making it among the largest middle schools in the state.

All notes to be available

Before getting under way, Joseph Curro Jr., who has been a selectman for four years and served on the School Committee four years before that, said: "Tonight is your meeting."

So it was, as listeners crowded around nine tables, later expanded to 11, and took up balcony seats.

Each had a designated note-taker using town-supplied Chromebooks. The aim was to put all of the suggestions from the evening in one place, said Dave Good, chief information officer for town schools. All are expected to on the town's Google Drive, to be linked at the town's website.

As of Friday afternoon, Town Manager Adam Chapdelaine said, that had not yet occurred, as the town awaited word from the school administration.

Bodie said Jan. 10 that Susse cintinues to work on the comments.

Meanwhile, in a testament to people power, parents of the Arlington School Enrollment Community Group, had a summary of the meeting posted on the morning of Jan. 8. Read it here >>

Near the meeting's end, as summaries were reported, Susse had the last word. She echoed a suggestion from School Committee colleague Jeff Thielman that next November's presidential election might be the time to consider having a debt-exclusion override on the ballot. That would be earlier than previous suggestions from Chapdelaine.

Such an initiative would allow all of the financial issues pressuring the schools to be considered in one place -- money to deal with expanded classrooms, with part of the high school rebuild, potentially with the Minuteman rebuild.

The matter is expected to be among issues discussed at the 7 p.m. meeting of the Enrollment Task Force on Tuesday, Jan. 12.

Below are questions that those involved in the visioning exercise considered (a link to the full report of all comments will be provided at the bottom of this story once it is known):

2. As you think about our available options how important are considerations about class sizes?

3. What are the advantages and disadvantages of temporary structures vs. permanent structures?

4. What do you think about the option of a K-2 and 3-5 model in East Arlington, or across town?

5. What are the pros and cons of pulling the 5th grade out of elementary schools, to either exist on their own or with s" grade?

6. Some options are more expensive than others - what is more important, the configuration of our elementary schools or the related costs?

1. Last year Ottoson was the 7th largest middle school in the State. As you think about our available options how important are considerations about the size of our middle school(s)?

2. What do you think about options that involve separating out a grade (e.g., 6th on its own or 8th grade at the H.S.)?

3. What are your thoughts about the option of having two middle schools of unequal sizes?

5. Some options are more expensive than others - what is more important, the specific configuration or the related costs?

1. What are pros and cons of keeping Gibbs as a community resource, or renovating it for school use?

2. Knowing that additions and certain renovations are typically less expensive than building a new building, what is your preference regarding additional space needs?

3. Some options will take longer to implement than others. How important is it to you that we find an option that can be implemented quickly?

4. What other ideas do you have for using available space in town?