Plans for beer garden adjusted in response to some community concerns 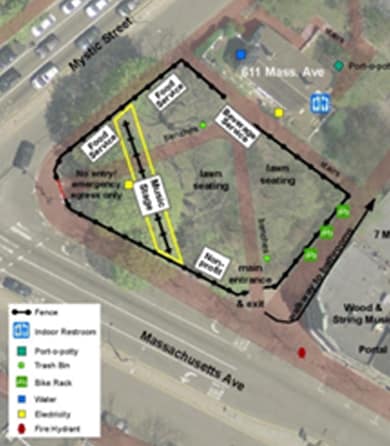 UPDATED, June 25: Before officials vote on the proposed weekend beer garden for Whittemore Park on Monday, June 25, they will consider a plan with changes, indicating the organizers are listening to community complaints.

Every weekend from July through September, Aeronaut Brewing Co. of Somerville plans to serve its alcoholic and nonalcoholic drinks accompanied by music groups at the park. Original proposed hours were noon to 10 Saturday and noon to 7 Sunday. The park, at Mass. Ave. and Mystic, and the location of the Chamber of Commerce and the Dallin Art Museum, would have restricted access and accommodate 250 people at one time.

The Select Board learned those basic facts June 11. In the days that followed, local social media lit up with residents' concerns: What about seats and tables? Are there enough toilets? Were area businesses adequately consulted? Is the event occurring on too many days?

Asked about these issues, Ali Carter, the town's economic-development coordinator, told YourArlington on June 19 that the plan has been adjusted, based on feedback from the Select Board, area business owners and other members of the community.

For one, Aeronaut has reduced the number of days for the proposed beer gardens to Saturdays only in July and on Saturdays and Sundays in August and September, except for Saturday, Sept. 15, which is Town Day. For that event, the company is proposing a location on David Lamson Way so that the groups that traditionally use Whittemore Park for Town Day can continue to do so. The new proposal is for a total of 21 days at Whittemore Park; the original plan was for 26 days.

Further, "The proposal has been revised to have 1 or 2 local restaurants to serve food in the beer garden," Carter wrote. "An RFP [request for proposal] to local restaurants was sent out, and several have expressed an interest in participating."

As to operations, directional signs will be provided at the entryway and within the proposed beer garden that will direct people to use the restrooms on site.

"Aeronaut has agreed to rent porta-potties to supplement the accessible bathrooms in the Cutter Gallery," she wrote.

To address a concern from the owner of the Kickstand Cafe, who said she feared her new bicycle racks might crowd out her customers, Aeronaut plans to rent bike racks to provide bike parking for their patrons.

When advertising the event, Carter wrote, Aeronaut expects to direct people to park in the municipal lots if they drive and to use the bike racks the company is providing.

As to seating, Carter wrote: "There are benches within the park, and patrons can sit on the grass in the park or bring blankets to watch live entertainment and enjoy the food being served by local restaurants picnic-style."

At the June 11 Select Board meeting, resident Bob Radochia asked what the town would be paid to permit the event. Town Manager Adam Chapdelaine indicated the town wanted to be reasonable for a first-time series and would look at the matter next year if it is successful.

Asked for a specific number, Carter said June 19 that Aeronaut will be paying a $400 fee to the Town for seasonal use of Whittemore Park. An updated memo on the June 25 Select Board's agenda adds $432 to be paid by Aeronaut for parking fees.

As to backing for the events, she said the proposal has received several letters of support from business owners; community organizations, such as the Old Schwamb Mill and Support Arlington Center; and residents. In these letters, supporters cite the need to revitalize Arlington Center, to bring in new businesses and to add entertainment options to draw in customers during the slower summer months.

In addition, businesses and organizations who have worked with Aeronaut before refer in these letters to their high level of professionalism.

"Indeed, they were the only business that responded to the Town Day Committee's outreach for a beer garden at Town Day 2017," Carter wrote, "and in my dealings with them they were organized and professional from start to finish."

Carter called the beer garden at Town Day 2017 and the Oktoberfest at Old Schwamb Mill, both serviced by Aeronaut, successes. These led her to explore last fall the possibilities for a summer event.

Carla Dorato, owner of the Artful Heart on Medford Street, has said that she and Arlington Center business leaders support the beer garden.

The beer garden is free and open to the public.

For safety and service controls, identification of all people entering the garden will be checked; children are allowed if supervised by an adult, and there is no requirement to purchase food or drink if entering the park.

There will be live music, which we hope will provide entertainment to beer-garden patrons and passersby in the Center. Folks who are looking for quieter, passive recreation can still make use of Uncle Sam Plaza, the Winfield-Robbins Memorial Garden at Town Hall and the various other open spaces in town.

Carter wrote: "The goal is to be inclusive and to draw people in who otherwise would not come to Arlington Center for shopping, dining, and entertainment options. It is not meant to divide the existing pool of potential customers, but rather to expand it by adding a unique attraction that you won't find in a mall or online, which are the major competitors of our local businesses."

Finally, she added, the planning process for Whittemore Park that is underway emphasizes maintaining the train tracks as an artifact, providing clarity for the meaningful interpretive displays that are in the park and providing greater access to and visibility for the Jefferson-Cutter House, which is home to the Cyrus Dallin Museum.

Notably, the museum's board of directors has written in support of the proposal because "the proposed beer gardens will go a long way in helping Whittemore Park reach its fullest potential as a vibrant, engaging, and consumer-friendly public space this summer."

This news summary was published Wednesday, June 20, 2018, and updated June 22, to add a link and info about payment., as well as June 23, to updated illustration.