Links to 2 lengthy documents included below

UPDATED, Jan. 15: Nine speakers asked the Redevelopment Board Monday Jan. 8 to put the brakes on the zoning recodification effort.

As an estimated 45 people listened at the Senior Center, the speakers cited a number of specific differences between the revised zoning bylaws and the originals.

The speakers expressed gratitude toward all involved in updating the form of the bylaws dating to 1975. Seven of the nine presented detailed, thoughtful responses to the third draft of the recodification effort. The ninth, John Leone, the Town Meeting moderator, wanted to know when a final document would be ready so that meeting members would be able to digest its 100 pages.

By Wednesday, Planning Director Jenny Raitt told him at the end of the 1 1/2-hour hearing, At the continued hearing that 7:30 night in the Senior Center, the Redevelopment Board plans to receive the final document, discuss what they heard Jan. 8 and vote on whether to delay the matter or send it to a Special Town Meeting in February.

None of the nine speakers spoke in favor of moving ahead with the current draft. Indeed, members of the Redevelopment Board said it was missing information -- in one case, an issue pointed out by a speaker.

A story and some advice

John Worden, previously serving for 18 years as Town Meeting moderator, called the draft "deeply flawed," but he began with a story. He noted that Feb. 12 Special Town Meeting will mark, roughly, the 40-year anniversary of a Redevelopment Board hearing about a 13-story tower proposed for Mill Street (Five stories were built after a court challenge.). The weather that night? A historic blizzard.

The atmosphere in the Senior Center's main room had some wind, but for a purpose: The aim of the yearlong effort is bring consistency and readability to the zoning bylaws, a step called for in the 2015 master plan. A number of speakers pointed to key a inconsistency -- where bylaws were called unchanged, they pointed to alterations of language and meaning.

For example, Worden read a bylaw dealing with lot frontage noted as having "no change in wording." He read the revision (6.20.a) and the original, dating from 1991, a Town Meeting he remembers. "Those are not the same words."

In a guide provided by the Recodification Working Group, you can see all of the changes in the draft up to Jan. 8 and how they are described >>

As to the definition of "foundation" -- which Worden said "is loosely interpreted by inspectional services" -- he said of changes: "If you're going to change, make some changes for the neighborhood, not just for the developer."

Like those who followed, he urged postponing a decision, asking he board to "wait until you have a really good document. Don't try to ram it through."

Elizabeth Pyle, a land-use attorney who is a Precinct 10 Town Meeting member and a serves on the Residential Study Group, said she supports the goals of recodification, but there has has not been enough time for a thorough review before the Special Town Meeting.

In a Jan. 8 letter to the board, she wrote that her "serious concerns" focus on "many substantive changes in this draft that are beyond the scope of the Zoning Recodification's Working Group's mandate to reorganize, but not change the meaning of, the zoning bylaws."

An example of a change she cites Section 6.06 of the existing bylaw, "Exceptions to Minimum Lot Size, Frontage, Open Space, and Side Yard Requirements in the RO, RI, and R2 Districts," nonconforming lots may be built upon (subject to certain requirements) if they "did not contain a principal building" -- i.e., the lots were vacant land.

"However, in the new version, which is supposed to be at 5.4.2(B)(I) and (2), the requirement that the lot 'not contain a principal building' has been dropped for the RI and R2 Districts. This means that under the proposed new bylaw, nonconforming lots could now be built upon in the RI and R2 Districts even if they contain a principal building, and are not vacant land. This is a major policy change, and will expand teardowns in Arlington on nonconforming lots."

Wynelle Evans, a member of the Residential Study Group, thanked all who volunteered, saying here remarks "in no way [mean] to disparage your efforts.

She said that is her "compulsive way," she lined up changes between the draft revision and the original and found more than 100 examples of inconsistencies.

Saying Town Meeting comprises the audience for the recodification, Evans asked: "How are you advertising this" to its members?

Raitt said outreach was taking place through board member Dave Watson and meeting members Christian Klein (10) Steve Revilak (1). They emailed surveys to those members who provide addresses and used snail mail for the rest. The response rate was 30 percent.

She urged no action.

Chris Loreti, a former Redevelopment Board, echoed previous speakers, seeking to delay. Well informed about the zoning bylaws, he offered a flood of comments about a series of suggested changes. His examples targeted draft provisions that would alter Section 9, which he called "much abused."

A proposed change to 9.02, he said, removed a clause, which could allow the building inspector to grant a permit in cases that previously he could not.

On Jan. 10, he provided two examples of policy changes in the revised zoning bylaw that directly contradict its purpose of discouraging the perpetuity of nonconforming uses and structures and goal of providing clarity to permit applicants -- in this case, when they seek to alter nonconforming structures. Both involve changes to the current Article 9 on nonconformities, which is extremely important part of the bylaw since most homes and/or lots in large parts of town like East Arlington are nonconforming.

1. The revised bylaw removes the clarity previously provided by Town Meeting concerning what it means not to increase the "nonconforming nature" of a structure, which is necessary in order for a nonconforming structure to be extended. In the current bylaw, it is made clear that if you build up within the existing footprint of a home, it will not be deemed to increase the non-conforming nature. However, if a wall of your home does not meet the current setback requirement (distance to the property line), and you want an extend that wall along the same line, it is up to the Zoning Board of Appeals (ZBA) to make that determination. The revised bylaw drops both of these provisions, leaving decisions on the nonconforming nature to be made by the Building Inspector outside of public view.

Loreti's comments are included with those from Evans, which is the first of two lengthy documents provided to the board and planning. Read those documents here:

A. Michael Ruderman, a Precinct 9 Town Meeting member, works for the state Highway Department in a position that puts him touch with many town zoning bylaws. He commended the recodification push and said he hoped it succeeds, but said the document leaves him with a level of discomfort, suggesting it would not find success at the Special Town Meeting.

A broad view of zoning

Pat Hanlon, a Precinct 5 meeting member, made comments reflecting his zoning experience. Having served on planning board in Fairfax County, Va., he was appointed to the town Zoning Board of Appeals in October. 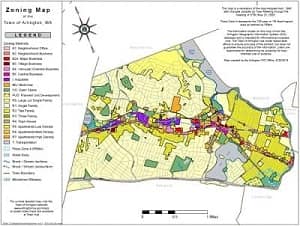 He congratulated all contributing to the process, and then took a long view of zoning issues. "They always end up complicated and contradictory," he said. The extent of the matter "is a matter of degree." Adding definitions makes zoning bylaws arcane, he said.

"Town Meeting needs to know what the alleged changes are," he said, urging that the record be made public. "Where there is a serious argument, put it into the next stage."

Paul Parise, an Arlington resident, spoke last. Home-bound during the recent snowstorm, he spent time poring over the draft and said he found dozens of discrepancies and misrepresentations.

"If you do not delay this vote," he said, "you will not have the confidence of Town Meeting."

The schedule of meetings

In an effort to prepare for the continued public hearing, the Zoning Recodification Working Group has canceled two of four neighborhood meetings. The rescheduled meeting dates will be announced at a later date.

The following neighborhood meetings will be held at 7 p.m. in the Media Center at the following dates and locations:

This news summary was published Wednesday, Jan. 10, 2018, and updated Jan. 10, with links to two documents, and added Loreti comments, as well as the vote. It was updated Jan 12, to replace a link and note two meetings.