Patriots Day Parade marches again after a year off

Colonial marchers, followed by smoke from their rifles, stride through Brattle Square in the 2016 Patriots Day Parade. / Photo by Emily Sprague

UPDATED, April 18:  The Patriots Day Parade stepped off from the Heights to Eastie on a brilliant Sunday, April 17, as grateful crowds watched.

After no parade was held in 2015, the first miss in perhaps a century, generous contributors this year helped reach the $20,000 fund-raising goal, and the parade returned.

The late Kenny Simmons was honored as the parade grand marshal for his military service and service to the town. His family was riding in a 1974 Cadillac El Dorado provided by Ed Whalen and driven by Bob Bowes of Bowes Real Estate.

On April 18, Christine Connolly, of the Parade Committee, thanked Laura Munsey, who she called "the true parade organizer -- booking the bands, coordinating the order of marchers, coordinating volunteers, supplies and even the after gathering. Great work Laura, great work to all who volunteered."

Selectmen in March approved plans, including the 52nd annual Fun Run, held in the morning.

A Menotomy Red Coats-vs-Colonials' reenactment was held at noon at the Jason Russell House.

Leader Bank, one of the parade's platinum sponsors, was the host for a celebration at its 864 Mass. Ave. site during the parade, noon to 4 p.m.  Details >>

Other marchers included the Somerville-based Dirty Water Brass Band -- a "moveable block party"; the Greater Boston Fire Fighters Pipe and Drums, as well as representatives of the Regent Theatre, celebrating its 100th anniversary.

In a news release in January, the town said it was seeking donations to fund the 2016 parade, and the parade committee met its goal. The parade, which relies on private donations, is returning after a one-year hiatus.

"We are so pleased and thankful for the overwhelming amount of support from donors and sponsors for this year's parade," said Selectmen Chair Kevin Greeley in a news release. "This outpouring of support allows us to renew a great town tradition."

"All are invited to what is shaping up to be a wonderful event, with attractions for all ages," said Greeley. "Please join us this Patriots’ Day to commemorate our history and celebrate our wonderful community."

The town will use #ArlPats2016 as a tag for all social media surrounding the parade and ask the public to participate in the celebration by doing the same.

The 2016 parade received national exposure as the National Park Service celebrated its 100th anniversary in 2016 and included the Menotomy battle reenactment on its calendar of events.

The 2016 Patriots Day Parade began begin its route at Brattle Square in Arlington Heights at 2 p.m., traveling down Mass. Ave. to the Linwood Street area in East Arlington.

The Arlington Historical Society and Menotomy Minutemen included a battle reenactment as part of this year's Patriots Day activities, an event not seen here in several years.

It was held at noon on the Jason Russell House grounds at Mass. Ave. and Jason Street.

Other events throughout the day and weekend included opening of the Jason Russell House for tours on Saturday and Sunday (April 16-17) from 1 to 4 p.m., and an 8:30 a.m. flag raising and burial ground ceremony by the Menotomy Minutemen at the Town Hall flagpole and Old Burying Ground.

Historical Society President Stuart Brorson says, "We're very pleased to host again a reenactment of the battle which took place at the Jason Russell House on April 19th, 1775. That day marked the beginning of the American Revolution. The road through Arlington -- today's Mass. Ave. -- was the scene of the heaviest fighting which took place as the British retreated from Concord.

"Among the biggest battles of that day took place inside and outside the Jason Russell House. Jason Russell himself lost his life to British regulars on the doorstep of his house.

"The goal of the reenactment is to show onlookers what happened during that battle, and remind people of the central role played by the village of Menotomy (today's Arlington) on the first day of America's revolution."

For more information, visit the Arlington Historical Society website or call the society office at 781-648-4300. A society newsletter includes these photos: 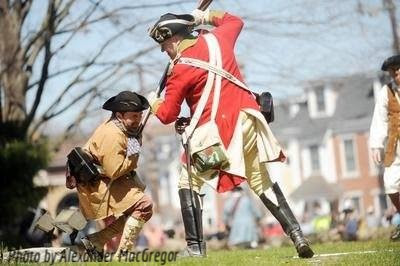 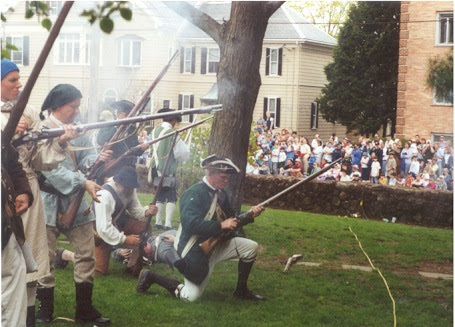 To donate online, become a sponsor, or to participate in the parade, visit www.arlingtonma.gov/parade.

"Show your pride in Arlington by supporting the Patriots Day Parade," the release concludes.

YourArlington's 2015 report said: "For the first time in more than a century, Arlington will have no Patriots Day parade.

"No flintlocks firing, no Menotomy Minute Men drumming, no clowns dancing and politicians strolling, no fire engines with horns blaring, no firefighters offering boots for donations, no Dixieland music playing, no vendors with carts advancing, no trick-cars wheeling. No Shriners.

"But, above all, no children and parents smiling.

"Enough donations to continue the event, supported by town funds since 1926, did not arrive during the cold and snows of the region's historic winter, and organizers are looking ahead to next year."

Many community groups will be marching in the parade, including:

This year's parade is made possible due to the generosity of the following sponsors:

Revere, Dawes pass through as kids keep crafty until 2 p.m.

Join the Menotomy Welcoming Committee and greet Lancers reenactors Paul Revere and William Dawes at Arlington Town Hall on Monday, April 18, on their way to warn residents that the Regulars are out.