Guard dog project at Robbins Farm breaks into a trot 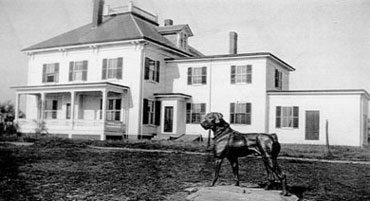 Talk about a dogged effort! The search for the four-foot-long statue of the Labrador-mastiff that once guarded Robbins Farm has barked up too many blind alleys, and the pooch is in the hands of a Texas sculptor.

The project, which will result in a bronze dog, not the cast-iron original, is "75 percent along," Roly Chaput of the Friends of Robbins Farm told selectmen this month.

As much as $15,000 has been budgeted for the restoration, which will be paid for privately, except for the DPW installing a concrete base.

After failing to find the sculpture -- which had stood near the farmhouse of Nathan Robbins from the 1880s until about 1950 -- those involved tracked down Lori Betz, a sculptor/artist in Houston. 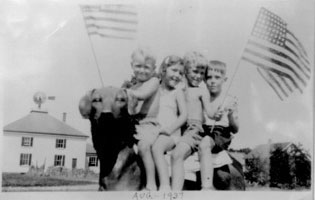 Youngsters in 1937 sit on the original sculpture.

"We picked her because she has access to two similar dogs (one faces left and one faces right), in that city," Chaput wrote in an email Tuesday, Sept. 10. "We need the left one. Having access to a statue means it's less costly to come up with a mold to cast the copy."

The Park & Rec Commission has blessed the project, but where the replica would be sited has not yet been determined.

"We've considered several sites, primarily at the top of 'Boston Hill,' but as yet haven't agreed on the most appropriate one given several factors that must be reviewed," Chaput wrote.

The installation is expected next spring, he wrote.

Oakes Plimpton, who published Robbins Farm Park, Arlington, Massachusetts: A Local History in 2007, sent a photo showing the original dog with the Robbins home behind it. 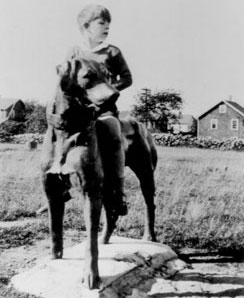 Plimpton wrote: "One site being considered ... is to outline the mansion foundations (presently visible a hundred feet west of the viewing oval) and place the dog statue in front of it, as though guarding it."

Chaput said Oct. 1 that there are several potential location, and one has not yet been chosen.

Plimpton continued: "We think the original statue was based on Thomas Frederick Hoppin's statue the 'Sentinel' (1849), which he sculpted after a mastiff who barked and alerted his family from fire.

"As you may see, the tail is missing, and we may [modify the tail's position] (both for history and safety). It was broken off in the early 1930s. No doubt farmer Nathan Robbins' grandfather of the same name originally acquired the statue (the mansion built in 1884)."

Nathan was a member of a well-known Arlington family that gave the town several of its public buildings, including the library. The farm stayed in the Robbins’s’ possession until 1942, when the town purchased the property in a friendly eminent domain taking for the purpose of using the land as a park,  Plimpton has said.

Until then, generation of children played on the guard dog or used it for a photo opportunity.

Chaput told selectmen that such memories could be lost to history, but the Friends are trying to avoid that.

After the farm house was demolished, the dog disappeared. Those seeking the old pooch this year had some hope after Chaput received a call from a man who remembers sitting on the dog in Somerville. He followed up, but it could not be found. Searchers looked for a copy.

The size of the replica Betz is making is based on estimates from on a picture the Friends have of the dog statue from Houston.

The bronze statue is expected to weigh from 300 to 400 pounds.

A Boston.com report from last March explains the earlier effort to find the missing dog.  That story recounts this history:

Robbins married May Robbins in 1902, and around 1912, the year the new Town Hall opened, they moved into a house on the farm.

Chaput told The Globe that is unknown when the Robbinses obtained the canine statue, but speculated it was used as a make-believe guard dog. He said the statue was probably cast iron but could have been bronze.

By the mid-1920s, Nathan and May Robbins had become infamously at odds with each other and by some accounts did not speak for about 20 years despite living in the same home.

According to an article that ran in the Globe on Jan. 17, 1929, May Robbins was said to be suing her husband for financial support and claimed that though her husband grew potatoes, he gave her rotten potatoes to cook and he left the kitchen table whenever she entered the room.

That history will not be included in a plaque planned for the dog.

Selectman Diane Mahon pointed out that perhaps Chaput and his group could duplicate what the Symmes 360 community areas will have -- information that people can scan with an iPhone, iPad or another device.

Selectmen Chairman Dan Dunn said that would be a QR code, which would link to lengthier historical information about the dog and site.

Chaput said he thought that could be added, while noting how costly a small plaque can be.