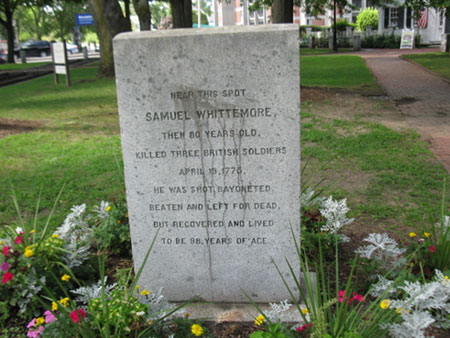 Arlington has long had a hero -- Sam Whittemore, who, though bloodied and battered on the first day of the Revolution, stoutly fought the British.

His bravery is etched in stone near the Jefferson Cutter House in Arlington Center, as you can see at left. But how much of what has been written about Whittemore is fact and how much is fiction?

After reading a brief account of Whittemore's life published in YourArlington last October, Polly Kienle, a park ranger at Minute Man National Historical Park, offered some strong evidence that is contrary to the story.

The account, titled "A Brit looks at Sam Whittemore,"  was written by Dave Stephenson, a freelancer in England.

In part, he wrote: "Yet Whittemore was in fact born in England in 1694, and served as an officer in the English army.

"He fought in a number of campaigns, including King George’s War (1744-48) and arrived in 1745 in the Massachusetts Bay Colony, where he remained."

Kienle took issue with two of those claims.

"Whittemore was not born in England," she wrote in June. "It is not likely that he served in the English military. All Whittemore family genealogies -- and there are many of them -- as well as both the Cambridge and Arlington town histories, correctly note his place of birth as Charlestown, Massachusetts.

"He was part of the large and energetic Whittemore family that had toeholds in many towns, spreading from Charlestown to Cambridge/Menotomy, Lexington, Concord, Harvard, etc.

"I have not been able to pin down the exact type and extent of his military service in England's wars with the French. If he was a cavalry soldier in a 'dragoons' unit, he could very well have been part of the Massachusetts militia forces that engaged in expeditions to Canada."

YourArlington has attempted to independently confirm the information that Kienle has offered. So far, the record about where Whittemore was born is conflicting, and the specifics about his military service remain in question.

Even so, in the light of the fact that Kienle represents Minute Man National Historical Park, fairness requires that the publisher reflect the record, in so far as it is known.

Writing in July, Kienle noted that she found the YourArlington story following a request for information about Whittemore. "He is quite in vogue these days, and there is a good deal written about him online," she wrote. "Making him state hero of Massachusetts [in 2005] has done a good deal for his visibility, it seems."

She discussed available online source that the freelance writer may have used -- including this one from the Sons of the American Revolution.

"While much of what the piece says about the course of the Battle of Lexington and Concord is accurate, the story of Samuel Whittemore is hard to trace. I have not been able to find any publication that contains the detail that this Sons of the American Revolutions site recounts. (I am writing to them to ask about it...)."

Kienle wrote that using materials related to the Whittemore family and to the history of Cambridge/ Menotomy/Arlington, "it becomes apparent that Whittemore was born in Charlestown and was part of a large Whittemore clan that had been in that town since the 1630s.

"I have conducted extensive research on the Whittemore family, but not specifically about Capt. Samuel."

She provided two posts by J. L. Bell, a historian in the Boston area who writes the "Boston 1775" blog, which Kienle calls "fantastically well-researched." She calls the information "solid," while noting "there are some areas of [Whittemore's] biography that are simply not yet accurately reconstructed."

"They will fill you in on what is reliable about the April 19, 1775, story of Whittemore's epic exploits.

"I agree with Bell's assessment about what is truth and what is fiction in the legend of Whittemore's April 19th heroism.

In an effort to pin down Whittemore's death, Bell cites a 1793 obituary for him that appeared in the Columbian Centinel. See the whole text in Cutter & Cutter's History of Arlington (1880), pp. 76-77. Google Books link >>

The Whittemore family genealogy was published in serial form in the 1953-1954 editions of the New England Historical and Genealogical Register (1953, pp. 28-30). Page 29 is at right.

"Whittemore was very much a part of his local community and played a long-term role in its governance, she wrote, concluding: "He was not born in England, nor was he an English Regular Army officer."

As to Whittemore's military service, she wrote that Paige's History of Cambridge (p. 668) calls him "'Captain of Dragoons,' which seems closer to the truth.

"I have not located any published material on his service with what was most likely a provincial unit involved in the 1745 Louisburg expedition. ... I do not recall finding Samuel Whittemore in any of the Society of Colonial Wars in the Commonwealth of Massachusetts's very useful reference works on Massachusetts officers and soldiers in the French Wars of the first half of the 18th century.

When YourArlington asked the British freelancer to write a story last fall, the publisher made no suggestions about which resources to use to document the story. Once the story was submitted, the publisher checked the information presented. Some was corrected, including the date of the incorporation of West Cambridge (it was 1807, not 1811).

Other basic history -- including Whittemore's notable actions in Menotomy on April 19, 1775, as well as birth and death information -- was confirmed at Wikipedia, the Boston Discovery Guide, and at the Sons of American Revolution link that Kienle cites.

The information that Kienle has provided clearly shows that further research into Sam's story is warranted.

Further research since the ranger inquired has turned up further complications.

At Geni.com, a genealogy site, Whittemore's death date of July 27, 1696, squares with many sources. Yet after offering the birthplace as "Charlestown, Suffolk, Massachusetts, United States," it provides a contradiction, which may show the historical confusion about the point.

Without further explanation, the text says he was "born in England. He came to North America in 1745 as an officer in the British Army, where he fought in King George's War."

Other details in question

A further look at the links Kienle provide in Bell's log leads one to question other facts about the accepted story.

For example, Sam's birth date: Paige's 1877 Cambridge history says Whittemore had been born on July 27, 1696. That would mean he was 78 years old in April 1775, and 96 when he died. The blog notes: "But sometimes very old people and their family lost track of their exact ages."

Another case of unclear facts: Bell wrote that versions of Whittemore’s tale appeared in an 1870 family history and the 1880 History of Arlington by Benjamin and William R. Cutter. The writers gave the old man two pistols and wrote that his surgeons dressed “one shot wound and thirteen bayonet wounds.”

"Strangely," Bell wrote, "the Cutters started their account by quoting a version of Whittemore’s Centinel obituary, which said he had been stabbed '6 or 8' times with a bayonet. How did eight wounds grow to thirteen between 1793 and 1870? Memory creep."

The 2005 Massachusetts law naming Whittemore as official state hero repeated the errors in his obituary, saying he was “over 80 years old” during the battle and 99 when he died.

To date, research by YourArlington's publisher cannot definitely conclude whether Whittemore was born in England or Charlestown, though the weight of evidence Kienle provides suggest Charlestown. The jury is still out about whether Whittemore's military service may have been, at least in part, for England.

Work goes on to determine the accuracy of what has been set in stone in Arlington Center. In the mind of many in Arlington, Whittemore heroism that day remains unquestioned.