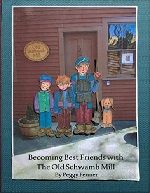 Becoming Best Friends with The Old Schwamb Mill tells the story of a child named Cody who has time on his hands while his brother does odd jobs in an old woodworking factory.

Cody uses his imagination to make sense of a building from another time. Along with his dog Dublin, Cody explores the tools, machines and benches in the factory, writing and drawing fanciful visions of the once-busy workplace.

His dream journal leads Cody to ask questions about the mill's history as he explores the building's dark basement and mysterious upper floor. The book is illustrated with photo-collages of the Old Schwamb Mill that incorporate the author's illustrations of Cody, dog Dublin and the other children in the story.

Author and illustrator Fenner has been a multimedia artist for decades after studying at the Boston Museums School, the DeCordova Museum, the Nantucket School of Design, as well as the International Art Collaboratives in Mexico, Switzerland, England and France.

She has created several storytelling events held at the mill, including “The Oak Tree Fairy Village,” “Teddy and the Bear Necessities,” “The Patchwork Pumpkin Regatta Quilts” and “The Great Chocolate Train Wreck. “

An Arlington resident, Peggy is a retired early education teacher who taught in Lexington for many years.

About the Old Schwamb Mill: In 1864, Charles Schwamb purchased a rebuilt, two-and-a-half story wood frame industrial building that had been built three years earlier but never occupied. The Schwambs proceeded to build west and east wing additions in 1869 and the early 1880s, respectively and were still making picture frames on the premises as late as 1969.

After 105 years operating as a family-owned business, a remarkable transition from working factory to a living-history museum was made possible by the vision and determination of Arlington resident and early preservationist Patricia Cunningham Fitzmaurice.

The mill’s unique 19th-century elliptical lathes, its original belt-driven shaft-and-pulley machinery, and the original hand-turning process are used to this day to create custom-made oval and circular frames for customers around the world.

The Old Schwamb Mill has donated 68 copies of Becoming Best Friends with the Old Schwamb Mill to nine elementary schools in Arlington, including Arlington’s seven public school’s second and third-grade classrooms and libraries, the St. Agnes School, the Leslie Ellis School and the Robbins and Fox libraries.