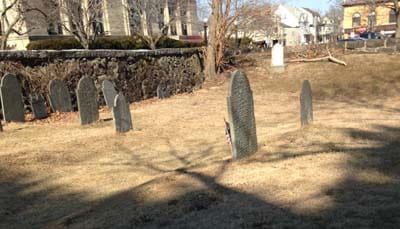 A section of the Old Burying Ground where slaves are believed to be interred.

`Slaves buried in Arlington? Yes, according to the Rev. Samuel Abbot Smith’s 1864 self-published lecture (republished by the Arlington Historical Society in 1974). He wrote that the British soldiers who died on April 19, 1775, “were buried near the wall and close to the brook which runs through the old grave-yard in the spot used for the burial place for slaves.”

Smith’s notation is the only piece of evidence we have of slaves buried in the historic graveyard behind the First Parish church in the center of town.

Unfortunately, the graves are unmarked and have garnered little public attention until now, when Arlington High School senior Maren Larkin began her internship with the Envision Arlington Diversity Task Group last fall. Encouraged by the group's cochair, Michaiah Healy, Larkin set out to research the lives of 18th-century Arlington slaves and to establish a marker on the graveyard site.

Slaves who lived in Arlington

Drawing on the research of Beverly Douhan’s “Buried Secrets of Menotomy Slaves," at the Arlington Historical Society, Larkin's report highlights the lives of four female slaves. All lived with 18th-century Arlington families and may well have been buried in the graveyard.

“I don’t think we need [physical] evidence. A commemorative plaque for slaves in Arlington would serve the same purpose ....”
-- Maren Larkin

These women, who carried out domestic labor for their owners, lived in homes whose names are familiar to many of us: Kate and her two children (who were not named in the records) lived in the Jason Russell House, known for its role in the British retreat from Lexington and Concord at the start of the Revolution. Rose lived at the Cutler Tavern, once at what is now Mass. Ave. and Prentiss Road, with her children Venus, Prince, Ishmael, Dinah and Tobey.

Flora lived at the Fowle/Reed/Wyman House at the corner of Old Mystic and Hutchinson Road and had six children. Pegg lived in the home of Capt. Philip de Carteret on Decatur Street.

How many slaves overall lived in 18th-century Arlington? The question is difficult to answer because of the paucity of evidence. Douhan used the Colonial Census to make an estimate for the year 1765. That census is referred to here >> In that year, approximately 500 to 600 persons lived in what was then called Menotomy. Among them lived 11 people “of color” over the age of 16 (four females and seven men). They were mostly likely slaves, though slaves were often freed as they became elderly and unproductive.

Eighteenth-century Arlington residents were certainly not alone in the use of slave labor. In mid-18th-century Massachusetts, colonists owned more than 6,000 slaves, according to the census that Douhan cites. Most of them lived in the larger population centers and were forced to work in a variety of industries –- ship-building, shoe-making, tailoring and printing. Those in rural areas were used exclusively in household work and farm labor.

While not subject to working in large numbers to pick cotton in the hot Southern cotton fields, slaves in Massachusetts were more isolated from their own communities. Owners bought only one or two slaves to supplement their labor needs. And from 1670 onward, by Massachusetts law, owners could sell off the children of their slaves, which separated families.

Slavery moved toward its legal end in Massachusetts with a series of court cases, and then these legal decisions were codified. Slavery was formally abolished in 1865 by the 13th Amendment to the U.S. Constitution. With the official end of slavery, its history remained unacknowledged and, for the most part, totally forgotten.

Only recently have New England communities become aware of slave graves in their midst. Some have taken steps to recognize and memorialize those slaves whose lives until now have been rendered invisible.

In 2003, contractors for Portsmouth, N.H., while upgrading downtown Chestnut Street, unearthed 13 deteriorating wooden coffins. Further excavations found the area to be the location of the 18th-century African Burying Ground. A team of experts worked for several years to determine that it held the remains of as many as 200 people of African descent.

Finally, after extensive community discussions and working with city officials, Portsmouth established on the site in 2015 the African Burying Ground Memorial Park.

More often, rather than direct physical evidence, some drawing or remembrance brings to light the locations of enslaved people’s graves. Some residents of Greenwich, Conn., found an old map that identified a plot of land designated as the “colored cemetery.”

Researchers studying the history of Greenwich have decided this plot contains the remains of black and Native American peoples, many of them slaves. The town has now taken the disputed lot by eminent domain and erected a plaque in remembrance of those unknown and enslaved people who were buried there.

Closer to home, Medford students last year campaigned to erect a plaque to memorialize the unmarked graves of slaves buried in the Salem Street graveyard. As in the case of Arlington, one historical source from a local history revealed the existence of the unmarked graves of slaves in the corner of the Salem Street Burial Ground: “In the south-west corner of that ground the slaves were buried.”

The Medford students, associated with the Center for Citizenship and Social Responsibility, raised some funds and were able to secure additional money from the town. The memorial marker was dedicated on Jun 8, 2019. The plaque read:

This marker can be seen at the graveyard, at Salem Street and Riverside Avenue.

A burial place in Menotomy was first designated in 1724, according to the Proprietors’ Records, in the place now behind the First Parish church. In 1767, the residents voted to erect a wall and, year after year, would contribute field stones until, decades later, the fence was complete. In 1843, the original wall was replaced by a sturdier one and a gate.

This month, James Feeney, who is Arlington's interim facilities director, applied to the Community Preservation Act (CPA) Committee for additional funding to make repairs to a second section of the perimeter wall of the graveyard. Phase I of the project rebuilding the wall, already funded at $379,144, is out for bid.

Phase II of the project to repair the wall, as indicated in the map accompanying this story and now in the planning stages, would be next to the probable location of the British soldiers and the slaves’ graves. The Planning Department is asking for an archaeological survey of the town, which would include the Old Burying Ground. For fiscal 2021, the town seeks $193,773 in CPA funds.

Under consideration for use in the Old Burying Ground is ground-penetrating radar, a technology for preliminary subterranean investigation. “It can help identify subsurface anomalies and objects at a particular depth," Feeney said, "and even give insight into identification or composition based on the appearance and characteristics of the image returned.” This technology is often used to locate old water pipes.

Feeney reported that while human remains might be difficult to identify, there could be artifacts or ground-disturbance lines denoting a trench for mass burial. Those involved are not, however, considering disturbing graves at this time.

Whether or not physical evidence is located, Larkin, the Arlington High senior, is determined to move ahead with her plan to place in the cemetery a memorial to Arlington’s enslaved people. Her position is: “I don’t think we need [physical] evidence. A commemorative plaque for slaves in Arlington would serve the same purpose regardless of whether or not there were actual people buried in that exact spot.”

Larkin has received encouragement from the Diversity Task Group and Superintendent Kathy Bodie, who would like to feature the project in the school department newsletter, but she faces two formidable obstacles: permission from the cemetery commission and funding.

Producing physical evidence, a possible requirement from the cemetery commission, will be very a difficult task because it requires material historical documentation of enslaved people whose lives were not deemed worthy of headstones or elaborate burial regalia, much less notation in the formal records.

Funding, too, holds back Larkin from achieving her goal. For the Salem Street plaque, Medford allocated town funds and helped the students find additional financial support. Larkin hopes that the town and those with knowledge of funding sources will step forward so that it can properly recognize these former residents of Arlington whose unfree labor helped to build the town.