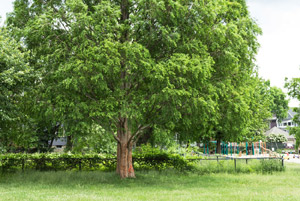 UPDATED, July 23: The Conservation Commission voted Thursday, July 21, to approve an amended town Recreation Department plan to improve Magnolia Park, including the removal of two dawn redwoods. The vote was 4-2.

"Injustice was done tonight in the name of 'conservation,'" Loh told YourArlington. "What should have been a value judgment was turned into a mathematical exercise.

"In essence every tree is replaceable in this town. Of course, we know they are not. There will be heartbroken children tomorrow when they learn about this decision."

Chapnick was especially eloquent in her opposition, Loh wrote. She stated that so long as she has been on the commission, its members had never allowed a tree of this magnitude to be removed, he wrote.

Tirone countered with essentially a mathematical argument that enough trees and other arrangements had been made to counterbalance the value of the dawn redwoods and the other trees to be removed, Loh wrote.

"This was a difficult deliberation. The Conservation Commission can exercise judgment in the application of our bylaws. In my judgment, the small grove of mature Dawn Redwoods, well adapted to the floodplain area, have a higher habitat value than the expansion of community gardens in a floodplain.

"I also believe that mitigation in the form of adding additional smaller trees does not always make up for the loss in habitat value of mature trees - as the younger trees may take a generation (20 years) to reach the same size.

"For the record, I would also add that I voted for the rest of the Magnolia Park plan (including the playground updates, storm water control improvements, etc). I voted against the expansion of the community gardens and the cutting down of the dawn redwoods and red maples."

"The Arlington Conservation Commission has the responsibility for enforcing the state and local regulations and bylaws for the protection of designated resource areas. These areas are (a) banks, (b) vegetated wetlands, (c) land under water and (d) land subject to flooding.

"Magnolia Park falls under the last category, as it is in the Alewife floodplain. Essentially, none of the park area is in an undisturbed natural state since it was used for storage and filling during the Red Line extension. It was then converted into a public park in 1985.

"When an applicant brings a project to us for approval it is our charge to determine that the environmental resources are adequately considered and protected. Our responsibility is to consider the proposal as whole, although we often ask the applicants to consider specific changes.

"The Park and Recreation Commission {PRC) had spent many months in developing the proposal and getting public input before bringing to the Conservation Commission in June, when it was recognized that the work was in the regulated floodplain resource area. The Conservation Commission then held public hearings and asked tough questions of the PRC and their consultants. At our June 16 meeting we approved the project except for an area that included the largest Dawn Redwood tree.

"PRC then came back at our July 14 meeting with an amended proposal that included the removal of the largest Dawn Redwood, along with extensive replacement plantings of native trees and a new Dawn Redwood. Altogether six trees would be removed and 39 new ones planted.

"The caliper (trunk size) of the replacement trees matches that of the trees being removed. This is more generous than is typically the case and meets the recommendation of the Arlington Tree Committee.

"These native plantings also provide good habitats for the local wildlife. For more specifics, the full text of the amended proposal is available at the YourArlington website >>
"We acknowledge that the largest Dawn Redwood is a very large and attractive tree (although not a native), but our charge is not to protect individual trees but the resource area as a whole. We have allowed the removal of trees in the past if there is sufficient remediation to maintain or improve the value of the resource area. In my view the PRC’s amended proposal made such a case and that is why I supported approving a permit for this work.

"We also need to acknowledge that the Park and Recreation Commission is a public agency proposing a plan for a public area. PRC has many objectives and constituencies to consider when they renovate one of our parks. Their responsibility is to develop a plan that meets the public needs. The responsibility of the Conservation Commission is to determine whether the plan satisfies state and local environmental regulations. The majority of the Commission decided that the amended plan did so."

Cori Beckwith, board administrator, will sign an order, signaling the 10-day waiting period until the Concom's action takes effect. She did not respond to a request to explain what the waiting period means.

Park and Rec Commission Jen Rothenberg has not responded to a request for comment.

The vote follows a more than two-hour hearing July 14 during which all sides had a say.

For two members of the Park and Recreation Commission, the process to improve the East Arlington park has been thorough and fully involved the community: four open meetings and as many as nine others over six months, commissioners Jen Rothenberg and Lesley Mayer told the Conservation Commission.

Then in June, neighbors objected to a plan to cut the 80-foot tree planted in the mid-1980s and launched an online petition. At the commission's July 14, hearing, as many as 25 showed up to defend the tree and cast doubt on a plan to upgrade 3-decade-old community garden.

At the end of two hours of testimony, the commission voted unanimously to continue discussing whether to approve cutting down four trees to give the larger garden more sunlight on July 21.

Globe, July 20, 2016: Should redwood trees be cut down for a community garden?

Steve Berczuk For town housing, move beyond critique to solutions
23 January 2022
My comment about facts was more about the followup analysis, rather than whether the report met state guidelines, and I didn't check on the state rules for the draft report. In M. Seltzer's article, ...
Don Seltzer For town housing, move beyond critique to solutions
22 January 2022
Mr. Berczuk accuses me of not getting the facts straight when I wrote that the draft Plan does not meet the State requirement "At a minimum, the Plan must examine...The capacity of the infrastructure ...
Bob Sprague Letters: Emailing Advocate? Copy it here
17 January 2022
Let the public know with a letter to the editor. For details, see https://www.yourarlington.com/easyblog/entry/70-letters/2631-yourletters-20Bob Sprague