The Alewife Brook has the worst water quality of any Boston-area water body, a group of environmental groups say.

While the Charles, Mystic and Neponset rivers received A's and B's in annual report cards released Friday, July 15, the Mystic watershed’s tributary, Alewife, drew the lowest grade for a major stretch of any of the three-river systems — a D.

In response to the 2021 Three Rivers Report Card, Patrick Herron, executive director of the Arlington-based Mystic
River Watershed Association, said in a statement: “This year’s report card for the Mystic River Watershed reminds us how far we have come thanks to the 50-year-old Clean Water Act.

“But it also reminds us that we have more to do to meet its full promise. Many waterways in the Mystic watershed are safe for recreation most of the time, and we should celebrate that. But we also need collectively to invest in urban infrastructure at scale, so that all city residents living along and near the Mystic and its tributaries can enjoy and access the clean water they deserve.”

YourArlington asked David White and Kristin Anderson to respond on behalf of Save the Alewife Brook, a grass-roots group of Arlington residents who seek to improve water quality in the stream bordering Cambridge and Somerville. They wrote:

“Save the Alewife Brook agrees with Patrick Herron of the Mystic River Watershed Association that we need to focus our environmental-justice investments on areas where populations are being directly impacted by poor water quality like Alewife Brook.”

Andy Hrycyna, the watershed scientist for the Mystic River Watershed Association, said the spotty grades on some parts of the report cards for the three rivers tend to be on small tributaries that are disproportionately polluted.

In a report from GBH, he said: "In particular, sewage pollution; believe it or not, in the 21st century in our urban areas.”

Hrycyna said Alewife Brook is an example of that, where there’s something called "combined-sewer overflow" going on at times. 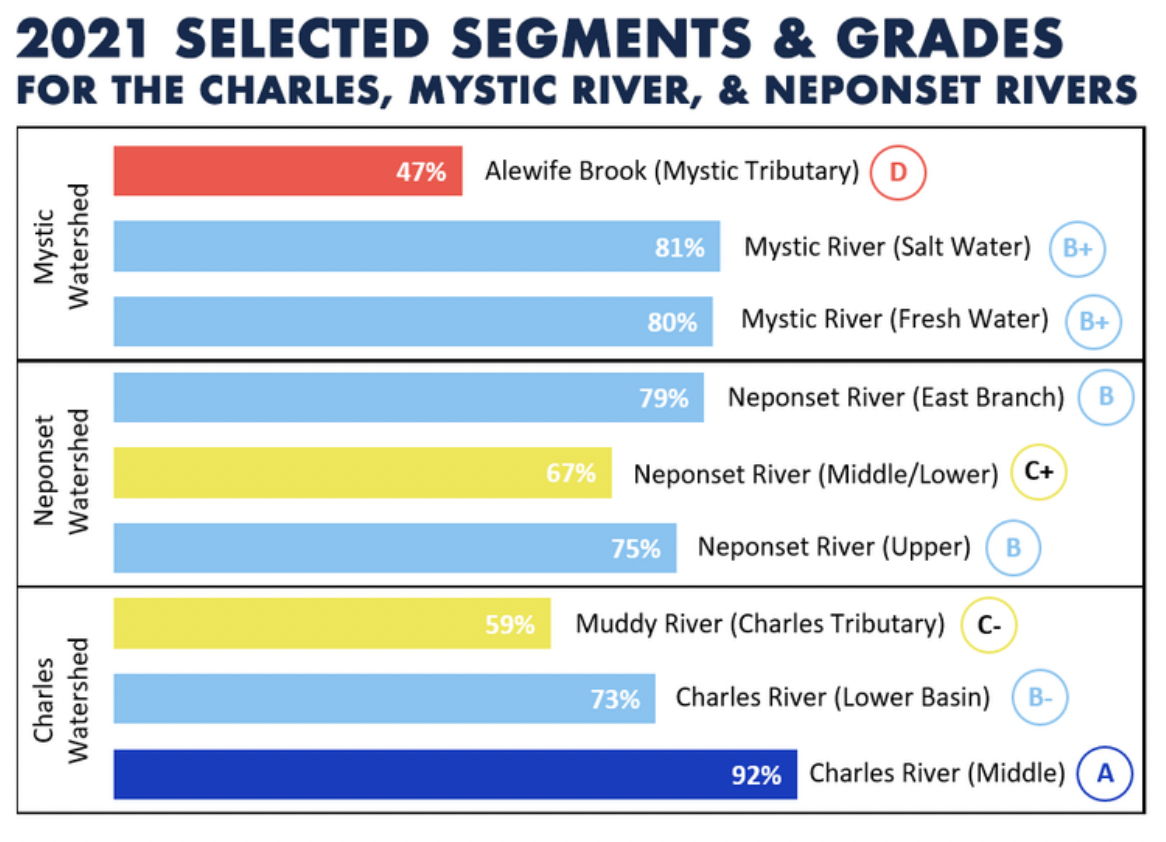 “These are situations where very old urban infrastructure directs both rainwater from the stream and sewage from our houses to the same pipe that's going to the Deer Island Wastewater Treatment Plant,” Hrycyna told GBH.

“But in really heavy rainstorms, that pipe can get overloaded, and, instead of backing up into our houses or onto the streets, it's literally designed to overflow into the nearest water body, which includes Alewife Brook, and includes parts of the Charles, and includes the Mystic River as well.”

The grades on the water-quality report cards look at levels of the harmful bacteria E. Coli in all three river systems, as well as dangerous cyanobacteria blooms and combined-sewer overflow discharges in the Charles River Watershed. The report card is issued annually by three area watershed associations, and the findings are reported to the federal Environmental Protection Agency.

Lisa Kumpf, the river science program manager at the Charles River Watershed Association, told GBH that the watershed is so much bigger than the Mystic that even “63 Olympic-sized pools' worth of sewage and storm water that ran directly into the river” in 2021 only resulted in the Lower Basin of the Charles slipping from a B to a B-.

“Our lowest grade is actually in the Muddy River, which is a tributary in Boston and Brookline,” said Kumpf. The Muddy River got a C-.

“And the story there is really due to the amount of storm-water runoff with impervious surfaces in that highly, highly urbanized area that runs into the river,” Kumpf said.

The impervious surfaces that affected that grade include parking lots, sidewalks, roads and large buildings, all of which shed storm water with collected pollutants from fertilizer, and even dog droppings, into rivers.

The Charles River Watershed Association and the Conservation Law Foundation are pushing the EPA to do more about polluted storm-water runoff in the Boston area’s three major rivers.

On Thursday, the two organizations sent a letter announcing their intent to sue the agency, saying it had ignored calls to protect the Charles, Mystic and Neponset Rivers from runoff, mainly from industrial and commercial properties, and was violating the Clean Water Act.

The letter says CRWA and CLF would welcome discussion with the EPA on taking steps to solve the problem.

Another factor that has watershed scientists concerned is the current drought. State officials say 90 percent of Massachusetts is experiencing drought as of this week, with most of the state in “significant” drought.

“This is the third year of significant drought in recent years,” Kumpf said. “That definitely affects the water quality.”

“If we have lower stream flows, we have more concentrated pollutants, we have hotter water,” Kumpf explained, “which decreases the amount of dissolved oxygen that can stay within the water, which fish and other creatures use in parts of our watershed.”

Kumpf said that in 2020 some areas just downstream of local dams ran dry.

“And that is obviously a huge issue for fish passage,” Kumpf said. “They cannot move between parts of the river that don't have any water in them.”

The Clean Water Act was landmark legislation adopted in 1972 calling for all waterways in America to be "fishable and swimmable" by 1983, with hopes to eliminate all discharges of pollutants into waters by 1985.

While those goals are yet to be achieved, the Clean Water Act has provided a much-needed face-lift to the Neponset, Charles and Mystic. Those three used to be industrial dumping grounds, flowing raw sewage and toxic pollutants into the Boston Harbor, making it inhospitable to plant and animal life.

In 2021, Massachusetts saw 52 inches of rainfall, 24 days above 90 degrees, and several flash flooding events, all of which influenced water-quality grades in the Mystic, Charles and Neponset.

The grades, which are based on the percentage of time E. coli bacterial levels are safe for recreation, precipitation data, and weighted with a three-year average, are influenced by increased precipitation. Additionally, grades for the Charles River account for the presence of cyanobacteria blooms and combined-sewer overflow discharges -- two additional threats to public health, that are each respectively exacerbated by extreme heat and increased rainfall.

The Mystic River and the Mystic Lakes receive grades from B+ to A+, indicating that they meet boating standards almost all the time in dry weather; and some important tributaries, including Winn's Brook in Belmont, Alewife Brook in Cambridge and Arlington, and Mill Creek in Chelsea continue to show clear evidence of frequent contamination by wastewater, earning the lowest grades.

The Alewife Brook tributary stands out as a place where infrastructure improvements should be prioritized to protect environmental-justice communities. Storm water from four urban municipalities, Cambridge, Somerville, Arlington and Belmont, and frequent combined-sewer overflows in Cambridge and Somerville, all flow into Alewife Brook and pose significant health risks to residents.

Ongoing news, from Save the Alewife Brook

This news summary was published Monday, July 18, 2022. It includes a report from WGBH that was produced with assistance from the Public Media Journalists Association Editor Corps funded by the Corporation for Public Broadcasting, a private corporation funded by the U.S. public.