Recycling in Arlington: What happens to that mess in your blue bin?

Arlington residents produced 12,263 tons of trash last year, the lowest in modern times, according to town recycling coordinator Charlotte Milan. And the town produced 4,995 tons of recyclables, also less than in recent years. 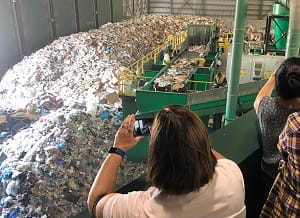 Where does that mess in your blue bin go? A group of about 20 Arlington residents had a chance to see what becomes of our town’s recyclables at a June tour of GreenWorks, a sorting and baling facility in Peabody.

HOW YOU CAN HELP

Know before you throw. Nonrecyclables degrade the quality and increase the cost of recycling.

Check the Town of Arlington’s Toward Zero Waste Guide for more information.

Put the following in your recycling bin:[*]

* Plastic-lined cartons, such as milk cartons;

* Containers that held contaminants, such as paint;

* Tanglers, such as wire hangers and string; and

[*] Check the town’s Recycling, Trash and Composting website for recycling, donation, or composting options for many items that can’t go in curbside recycling.

“Arlington is phenomenal,” Smith said, crediting the town and recycling coordinator Milan for Arlington’s low rate of contaminants. Smith and Milan organize several tours a year for Arlington residents, with the next expected in spring 2020.

Arlington’s 10-year cintract for hauling trash and recycling with JRM was signed in 2012, when JRM was building the GreenWorks facility and looking for a steady supply of recyclables to ensure its success. Under the contract, Arlington pays about $2 million a year plus about $1 million in “tipping fees” based on the weight of trash produced. Arlington does not pay for hauling of recyclables and receives no revenue from its sale, but saves money through diversion of recyclables from trash.

These terms may change when the town’s contract expires July 1, 2022. In 2018, China, which used to take the bulk of U.S. recyclables, enacted a ban on most U.S. recyclables, reducing the market and increasing costs for recycling. Many communities now face a choice between paying high fees to recycling-transfer companies, or treating the recycling as garbage, which is often cheaper but less ethically palatable. Massachusetts has a waste ban prohibiting disposal of certain recyclable materials as trash.

JRM did not respond to inquiries about whether it makes or loses money on its recyclables, and recycling coordinator Milan said she doesn’t have that information.

News stories about what’s really happening to our “recyclables” reveal they may be heaped in impoverished Southeast Asian communities, and our plastics may be burned as fuel by small tofu manufacturers in Indonesia, releasing deadly toxins and contaminating food. (See the list below.) Amid the horror stories, is recycling still a viable answer to our waste woes?

Milan says yes, with caveats. “Everything we buy seems to come in plastic, and much of it is not recyclable,” she concedes. “But it doesn’t mean we should ignore recycling as a viable way to recover value from used materials.”

She says it’s still better from the perspective of using energy, water and fossil fuel to reuse materials that have already been extracted and created. Milan notes there are domestic markets for many recyclable materials, including single-use plastic water bottles – but Americans recycle only about 10 percent of them. “If we could just recycle them, some re-manufacturer would purchase them and put them to use in a new product.”

In 2018, Arlington residents produced 538 pounds of trash – or solid waste – and 219 pounds of recyclables per person, based on JRM’s collections. That’s less trash, and more recyclables, than Americans produce as a whole. But for those concerned about resource extraction and the impact of their waste on the air, oceans, wildlife, the one sure bet is to reduce consumption on the front end.

This may mean, as Milan notes, eschewing convenience. Earlier this year, the Arlington Recycling Committee renamed itself Zero Waste Arlington in recognition of the broader attitude and behavior shifts the group hopes to engender. The committee’s revised mission is “to foster greater participation in all forms of waste reduction to improve health and restore the environment. ZWA shall conduct outreach efforts to help the town reduce generation of waste overall, while increasing the options for, and quality of, recycling.”

Arlington’s reduction in both trash and recyclables is a hopeful sign. A strong economy last year means the drop is not likely a result of reduced disposable income. Instead, the reduced waste may reflect a deliberate change in consumption habits. Growing use of composting may also be diverting waste from our trash and recycling bins.

Yale School of Forestry sees the upside of China’s ban, which is causing a U.S. reckoning with our waste stream

The New York Times tracks the fate of some U.S. plastics as toxic fuel for small tofu makers in Indonesia

The Intercept investigates what’s really happening with our recycled plastic, and the plastic industry’s conflicted role