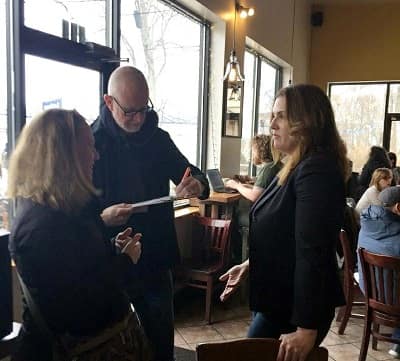 Lennon, 36, grew up in Sharon, Mass., and earned a journalism degree at Northeastern University. She works as director of communications for the College of Science at Northeastern. Energetic and ebullient, Lennon is a single parent of an 8-year-old daughter and an active volunteer who moved to Arlington three years ago.

"We had visited Arlington a few times, and I always loved the feel and the vibe of the community," Lennon said. "Moving to Arlington was the best decision we ever made."

Lennon quickly got involved in the community. She volunteers as a room parent at Thompson Elementary and coaching soccer, and serves on the superintendent's Diversity Task Force and the Equal Opportunity Advisory Committee. Beyond Arlington, she serves on the diversity committee at her workplace and volunteers for Jane Doe Inc., the Massachusetts coalition against sexual assault and domestic violence.

Asked why she is running for office, Lennon said she believes she has gained the experiences and skills necessary and is ready to take on the challenge. Working in TV news early in her career taught her how to tell a story effectively. She said her work as the founding communications director for a new program, the College of Science, required leadership skills, collaboration and innovation -- the same skills she believes make for successful legislators.

Finally, she participated last year in Emerge America, a six-month program that trains women who are Democrats to run for political office. She said the "soup-to-nuts" training was wonderful.

As to why she is seeking state office rather than starting in town politics, she said her interests are primarily state-level issues. Chief among her priorities are affordable child care; preparing students for innovation and technology; and affordable housing.

But running for state office means Lennon is taking on a well-liked 10-year incumbent in the Democrats' primary, which will likely determine the election in this Democratic stronghold. Both candidates describe themselves as progressive.

Focuses on what she offers

Asked whether she is challenging Garballey over differences in agenda or because she believes she can more effectively accomplish that agenda, Lennon focused on what she can offer: "It's not enough to be progressive. Good legislators need to be innovative and creative, and need to look forward at future challenges. ... I have the ideas and the initiative to be forward-thinking for this community."

Lennon said she planned to run for this seat since before last year's special election in which Cindy Friedman defeated Garballey for a vacant state Senate seat. Lennon spoke highly of Friedman and joked that her daughter thinks Friedman is "up there with Taylor Swift." 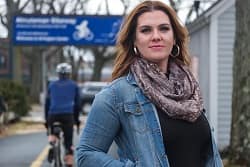 Lennon at the Minuteman Bikeway in the Center.

Speaking to her priorities, Lennon said she wants to make Arlington and Medford more affordable. "I think we need to do a better job supporting working families," she said. "Families shouldn't have to choose between finding work and having good child care."

She said she supports legislation raising the minimum wage to $15 per hour and another legislative proposal providing paid family leave for all workers. She also supports a patient confidentiality bill that requires health insurers to send "explanation of benefits" notices only to the patient; the measure is viewed as protecting the privacy and safety of dependents who are on a parent or spouse's health plan.

As to innovation and technology, Lennon said this district has the potential to be a leader in preparing for the future. She pointed to the "innovation gap," the shortage of students graduating with computer science degrees compared to the need for cybersecurity and tech jobs.

"We're surrounded by universities and tech start-ups," Lennon noted. "How as a district can we help fill that gap?"

Referencing her third priority, affordable housing, Lennon said we need to figure out how to help seniors stay in their homes and let families lay down new roots. She said Arlington and Medford are both part of a consortium of 14 communities examining affordable housing, and that she looks forward to seeing what ideas they develop.

"We have to harness the power of the community," Lennon said. "Being a communications person, I can do that. I spent my career doing that."

Lennon points to communication as key to success as a legislator: "You have to have your finger on the pulse." And she says successful lawmakers empower their communities by communicating to constituents what's going on in the State House, and why they should care.

Lennon hosted a forum in her home on Feb. 28 about gun violence and mental health with a local volunteer from Moms Demand Action for Gun Sense and a mental health professional from The Uniting Center. Lennon said she expects to hold more forums as well as meet-and-greets and coffees, and hopes to have lots of face time with Arlington and Medford residents.

Rep. Garballey, who knows he has to fight to keep his seat, held a fund-raiser March 9 at the Sons of Italy. He wrote March 11 that an estimated 400 people attended, and receipts were still being counted.

"I was honored by the attendance of over 400 supporters," he wrote. "I was also privileged to have several colleagues and local political leaders as well. I was introduced and endorsed by my friend and constituent Mayor Stephanie Muccini Burke of Medford."

Garballey added that he was recently endorsed by the National Association of Social Workers, Massachusetts Chapter and Mass Alliance, a coalition for political and advocacy organizations.

The primary election is Sept. 4, and the general election is Nov. 6. The deadline for candidates to file for the primary is May 8, and independent or minor-party candidates have until July 31 to file to run in the general election. Incumbent Garballey ran unopposed in the 2016 primary and general elections. In 2014, Garballey won 78 percent of the vote against Republican challenger Joe Monju of Arlington. Garballey, 33, was first elected to state office at age 23 as a graduate student, after having served on the Arlington School Committee.

DISTRICT SNAPSHOT: According to StatisticalAtlas.com, which uses U.S. Census data, the 23rd Middlesex district has a population of 42,000 with median household income of $86,000, about 23 percent above the state average. Residents' race and ethnicity is reported as 83 percent white, 8 percent Asian and less than 5 percent each of African-American, Hispanic, "mixed" and "other." At 4.6 percent, unemployment is below the state average, and the top industries occupying residents are professional, education and health care.

This news profile by YourArlington freelancer Rebecca Braun was published Sunday, March 11, 2018, and updated that day, to add info from Rep. Garballey.