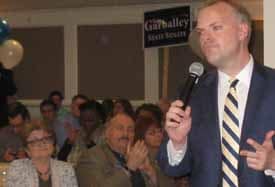 UPDATED, May 16: An estimated 500 supporters on Friday, May 12, helped launch state Rep. Sean Garballey's push to become the next senator for the 4th Middlesex.

A kickoff starts a football game -- it does not end them -- and the enthusiasm expressed at the Sons of Italy for the popular Arlington lawmaker got the short-term campaign underway in a noteworthy way.

The pep rally included politicians from throughout the district and beyond, including state Sen. Jamie Eldridge of Acton, who announced his endorsement, saying, "No one's going to replace Ken Donnelly." He was referring to the state senator whose death April 2 has set in motion a race toward a June 27 primary with three potential contenders.

Rep. Ken Gordon of Burlington led a rousing call-and-response. Asking, for one, what legislator has supported LGBT+ rights, he drew the only answer this audience could offer: a shouted "Sean Garballey."

State Rep. Marjorie Decker of Cambridge called the Arlington Democrat "one of my favorite legislators," citing his integrity, compassion, advocacy and leadership. She emphasized his ability to build relationships.

As to Garballey's record, Eldridge noted the rep's work for a law on children's hearing aids, a bill he cosponsored in the current session seeking support for 100-percent renewable energy, criminal justice and efforts to prevent privatization of the T. That drew applause from the pro-union crowd.

Demonstrating his State House reach, Garballey paused before speaking to introduce former state Reps. Marie St. Fleur and Maryann Lewis. His comments focused on the bills he has worked to pass. They aim to:

-- Protect social workers, which he said was a first in the nation, enacted in response to murdered worker. The details from 2013 are here >>

-- Support all 29 UMass campuses, which he said have been "underfunded way too long," via increased funding from 30 percent to 50 percent and frozen fees for students.

As founder of the MBTA Caucus, he called transportation the state's "biggest issue." He said the T is failing because of $5.3 billion in debt that the agency took on years ago. "It's not sustainable," he said, adding a bill he supports aims to reduce the debt.

He said he has worked eight years to assure state funding to rebuild Arlington High School.

In general, the 32-year-old said he has supported the vulnerable, those with disabilities and those who need a voice.

After emerging from the School Committee nearly a decade ago, he called Donnelly, who rose to the Senate in 2009, "my partner."

He added: "This is the political season. You will hear some things that leave you scratching your head." He was not more specific.

Emphasizing nine years of legislative experience, he said he looks forward to serving the district as senator. He said he wants to do what he has done in the House but on a "larger platform."

Jim Shaw of Lexington, who had been a campaign manager for Donnelly, made the expected pitch for contributions, but mentioned no specific expected fund-raising need.

Earlier, Shaw held a moment of silence for Donnelly, saying, "Ken would be pleased to see so many here for Sean."

Near the spread was a Medford resident who said he had just got out of Walpole prison after serving 15 years. He said he was there because Garballey was helping him get a job.

The third to indicate she is seeking the 4th Middlesex seat is Mary Ann Stewart of Lexington. No Republican has taken out nomination papers.

The 4th Middlesex district includes Arlington, Billerica, Burlington, Woburn and precincts 1 and 2 as well as 4 through 7 in Lexington.

This news summary was published Sunday, May 14, 2017, and updated May 16. Garballey provided the audience estimate and said that 512 volunteer sheets had been returned.