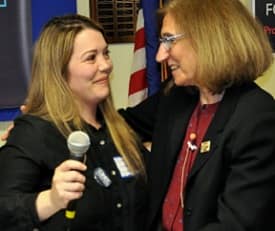 An estimated 125 people at the Elks on a breezy Sunday afternoon with a view of Spy Pond helped kick off Cindy Friedman's campaign for state Senate.

With a number present from Lexington and strong backing from the family of Ken Donnelly as well as Rep. Jay Kaufman, Friedman did what was needed May 7: She began giving shape to the brief campaign that ends with a June 27 primary.

Facing state Rep. Sean Garballey, the formidable opponent in a race of three seeking the late senator's seat, Friedman offered a brisk overview about who she is and what she had done as "co-senator." That's how Kaufman, a campaign cochair, termed her role since 2008, as chief aide to Donnelly.

The third to indicate she is seeking the 4th Middlesex seat is Mary Ann Stewart of Lexington. No Republican has taken out nomination papers.

Kaufman, a knowledgeable force as chair of the House Joint Committee of Revenue, noted Friedman's qualities of leadership and caring as well as her "enormous discernment" and "gravitas."

He said he would be "glad to have an adult in the job." One who knows legislative details plus the big picture, Friedman has "quiet confidence," Kaufman said.

What Friedman has done

Introducing the candidate was Brenna Donnelly, the late senator's daughter. The Woburn campaign cochair read a statement that included calling the campaign members "one helluva team" and noting that her dad had asked Friedman in final months his life whether she wanted to succeed him.

The recently returned Arlington resident, who had long lived in town before five years in Cambridge, made clear the focus of her campaign -- what she and Donnelly accomplished together, because the senator "allowed her to become his partner."

As a team, they worked on these issues:

-- Jobs. After Donnelly asked Friedman, "What more can we do?" Friedman suggested workforce development. Using What Kaufman called her deep knowledge of the Senate, she worked on the bill. Parts were adopted, she said, and there is now a funding stream for such development.

-- How mental illness connects to criminal justice. A pilot program via the state Department of Mental Health led to funding for the Arlington Youth Counseling Center, a community-based mental health center aiding those in town ages 3 to 21.

-- Homeless in hotels. She said the team kept eligibility regulations in place after attempts to chip away at them regarding flight from domestic violence. She said that a chief impact a senator has is to "stop bad things from happening."

-- Tips: By one vote, she said her team help stop an effort to have low-wage workers share tips.

Among others she cited were aid for workers seeking pension credits, local aid ("We are the bridge") as well as response to complaints about lights and noise at Dilboy Field.

She also noted efforts beyond town within the 4th Middlesex: the extension of the bikeway from Bedford to Billerica, rebuilding Billerica high school and keeping focus on Mary Cummings Park, Woburn.

"That's what I've done," she said. "There is a lot to do," adding that she is a "strong advocate for those who don't have a voice."

Comments that drew applause were those about education funding ("Keep public schools public"), carbon pricing and a desire to raise the minimum wage to $15 an hour, from $11.

Friedman provided her own applause for one issue -- bail reform: "It costs us $55,000 a year to incarcerate" one inmate .... "We should be screaming about that .... Let's work together for shared values."

Before she was chief aide to Donnelly, Friedman worked as a hardware/software engineer for 20 years and as a teacher for six years.

That connection to schools is clear. She cofounded the Arlington Education Foundation, a highly successful fund-raiser for the public schools. She has received endorsements from Arlington School Committee members Cindy Starks, Jennifer Susse, Kirsi Allison-Ampe and current Chairman Jeff Thielman.

Among those present from Arlington were Selectmen Chair Joseph Curro Jr., Thielman, Allison-Ampe and former Selectman Annie LaCourt. Also present were state senators Joan B. Lovely of Salem and Will Brownsberger of Belmont as well as former state Rep. Anne Paulsen of Belmont.

Among those from Lexington were Selectman Joe Pato and Bob Peters, recording secretary of the Democratic Town Committee.

The 4th Middlesex district includes Arlington, Billerica, Burlington, Woburn and precincts 1 and 2 as well as 4 through 7 in Lexington.