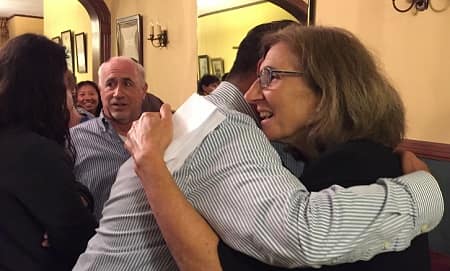 Rep. Sean Garballey, still fresh-faced at 32, was pushed aside by 776 votes. He won Arlington and Woburn, but lost elsewhere. Friedman was particularly strong in Lexington, likely reflecting the support of state Rep. Jay Kaufman.

In a tweet, Rick Sobey of The Lowell Sun reported the first unofficial results. Later results showed Friedman with 7,075 votes and Garballey with 6,299. Stewart got 428. See an image of the unofficial tallies below.

Arlington turnout was tops, at 24.6 percent, similar to the usual count in a spring town election.

Turnouts in other locales speak for themselves -- from 15.5 percent in Lexington to 4.9 percent in Billerica.

No Republican or independent candidates were on the ballot. Arlington resident Ian Jackson, a Green-Rainbow Party candidate, will face Friedman in the July 25 general election.

If elected in July, she would be the first woman to be newly elected to the Senate since Sen. Barbara L’Italien in 2015, and the 41st female state senator in Massachusetts history.

To chants of "Cindy, Cindy" at the Masonic Temple, Friedman said: "We have a lot of work to do and a lot of fights to fight. I will be strong, and we have each other."

Stewart immediately issued a statement: "I'm grateful for all my supporters and all the volunteers, and all the people who believed in me by giving me their vote.

"The campaign is over, but I'll continue to be an effective advocate for the people of the district and the Commonwealth.

"I'm grateful for all my supporters and all the volunteers, and all the people who believed in me by giving me their vote. The campaign is over but I'll continue to be an effective advocate for the people of the district and the Commonwealth.

I enthusiastically support the next State Senator for the 4th Middlesex District, Cindy Friedman."

"I was incredibly awestruck and a little bit overwhelmed” as the results came in," Friedman told The Globe in a phone interview. "We came from absolutely no name recognition to winning and that feels really good." 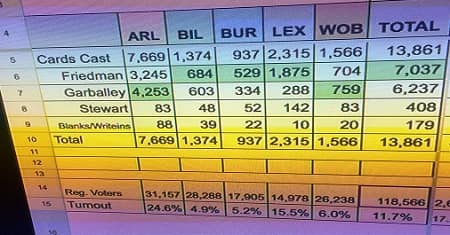 Supporters at the Sons of Italy said Garballey congratulated Friedman for running a great campaign across the whole district. He pledged to continue his work in the House fighting for mental health care, foster care and other causes.

"Politics means sometimes you win, sometimes you lose, but I am fortunate to have good work to do fighting for the vulnerable in the House," supporters quoted him.

The Friedman and Garballey campaigns have been asked for statements.

The 4th Middlesex Senate district encompasses the Towns of Arlington, Billerica, Burlington; precincts 1, 2, 4, 5, 6, 7 in the Town of Lexington; and the City of Woburn, all in Middlesex County.

Vying for the Democratic nomination in an abbreviated race are two Arlington residents -- state Rep. Sean Garballey and Donnelly's former chief of staff, Cindy Friedman -- as well as Lexington resident Mary Ann Stewart, a member of the state Board of Elementary and Secondary Education.

The state secretary of state's website says that, if a write-in candidate for state Senate gets 300 votes plus a majority of all the votes cast for candidates competing for their party's nomination, that person becomes that party's nominee in the general election.

Links to discussions of views from Garballey and Friedman on the Mass. Progressive Forum >> See an interview with Stewart >>

To date, here are those seeking that seat, listed chronologically from the date of an announcement:

Campaign meet, greet: Saturday, May 20, 4 to 6 p.m. at the home of Paula and Russ Antonevich, 76 Buckman Drive, Lexington.

May 19, 2017: Friedman's signatures accepted, placing her on ballot

Letters to the editor >>

June 9, 2017: Commentary on Paris accord withdrawal

Letters to the editor >>

The State House News Service has reported that an Arlington candidate has held the seat since 1983.

The state Senate ordered the election for Tuesday, July 25, to elect a successor to Donnelly, the Arlington Democrat who died April 2 from the effects of brain cancer. Primaries are set for held Tuesday, June 27.