UPDATED, June 16: Arlington voters faced three school-construction questions totaling $63 million on Tuesday, June 14, and delivered a resounding a yes to all of them.

Yes prevailed on all questions in all 21 precincts. The unofficial tally:

The dollar numbers are the town's best estimates and were not shown on ballot questions.

Turnout was 31.45 percent. In the 15 years through 2015, turnout for annual town elections has averaged 23 percent.

Numbers for Precinct 19 were the second among those reported, and it was a good sign for Build Arlington's Future, backer of a yes vote on all three questions. The ordinarily cautious precinct cast a 321-to-215 edge for the Minuteman question.

YesYesNo, a ballot-question committee that opposed the Minuteman question, may have had an impact on that issue, as reflected in the relatively narrower margin of victory.

Comments from both sides

A variety of people involved in campaigns on both sides have been asked to comment.

"I got involved with YesYesNo when I saw that the promoters of the new building plan were dishing out incomplete and often misleading information. That's why our web site was rich with links to primary sources, so anyone so inclined could dig deeply into all the available data and history.

"No one knows for certain if the new building plan will solve Minuteman's problems, but I trust that everyone took a careful look at all the available information and came to their decisions through their own assessments of the actual numbers and risk factors, not the marketing fluff. Now we own this plan and have to make it work, so that this vote won't have an adverse impact on Arlington's ability to provide quality education and adequate services for all.

"We have even more important challenges right around the corner."

"I think that the results speak to Arlington's commitment to its schools and reflect voters' confidence in the plans presented by the town for dealing with the enrollment surge. As a town we were ready to invest in our important school infrastructure to meet the needs of the students of today and tomorrow. We are so grateful for the support of the voters and look forward to watching these projects unfold."

Jennifer Susse, one of three campaign leaders for Build Arlington's Future and chair of the School Committee, wrote June 15:

Diane Mahon, also a leader for Build Arlington's Future and chair of the Board of Selectmen, wrote June 15:

"I think Arlington has a longstanding commitment to quality public education for our community, and this resounding vote has once again reaffirmed that vision.

"A vital part of the success of this campaign was to not only reach out to parents of school-age children who will benefit from this debt exclusion, but just as many supporters who have grown children or not who feel just as strongly to Arlington's dedication to high-quality schools with a matching high-quality education and facilities. 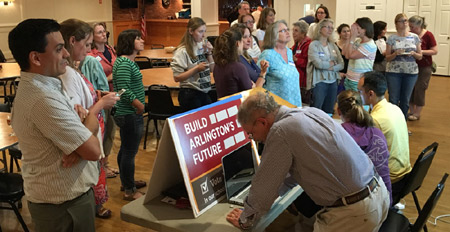 The scene at the Sons of Italy as votes were received. / Brendan Sullivan photo

"Also, I think we did our 'homework' in not only getting the information out about what the needs were and the costs associated, but also to our promise to be mindful and appreciative of those who voted for the debt exclusion to fund this mission."

"This vote clearly demonstrates what I, and others, have been hearing for quite some time now about starting to plan, and then eventually build, a high school that is long overdue. I think the fact that the high school ballot question received the highest number of yes votes is a clear testament to that sentiment."

Apart from leaders of ballot-question committees, those who manage the Arlington School Enrollment Community Group Facebook site were asked to comment on this question: What role do you believe this social-media effort played in the months-long push to deal with school issues that resulted in the June 14 election win?

Administrators of the site and others responded June 16.

"When a few of us parents attended the first few School Enrollment Task Force meetings last December, we quickly realized that big issues regarding our schools and town were being discussed, and it was going to be important for other parents to be informed.

"It was soon after these first two meetings that we started an email group list, and then started the School Enrollment Community Facebook page. The day we opened the group we wrote this description:

"'This page will serve as a forum to share accurate information about the increased enrollment and to use this information to request appropriate and feasible solutions to future overcrowding problems in our schools.

"'This is NOT a forum to rehash decisions that were made in the past or to argue about mistakes that any one person made. Those types of discussions will be deleted and we ask that everyone remain civil.

"'The town has a number of decisions to make including modulars and an addition at Thompson to alleviate overcrowding in East Arlington, and the possible expansion of a 2nd Middle School at Gibbs to deal with the overcrowding at Ottoson. By joining together as a well-informed, reasonable group, we believe we can help lead these conversations."

"[The Facebook effort] began by us posting agendas and minutes of School Committee and Enrollment Task Force meetings, and any relevant news articles that we came across. The discussions immediately started to take place, and people from all over town suddenly had an avenue for asking questions, and learning about the school enrollment discussion, they otherwise would have not have been in tune about. We monitor the page closely, to ensure that the discussion remains informative and productive.

"At the time the Facebook page was formed, a June Debt Exclusion campaign was far from anyone's mind. However, because many virtual discussions had taken place in the group, prior to the start of the campaign, many Arlington citizens and parents were informed and up to date when the decision was made to have the election in June.

"The background on the Facebook page did a lot of the outreach for us saving the campaign a lot of time. We were able to get down to the details of the campaign, without having to educate everyone first. In my mind, this definitely contributed to the large success of such a short campaign."

"It helped build an engaged and informed group of people who were having substantive conversations before those questions even went on the ballot. It also drew elected officials into the conversation in a really accessible way. From a messaging perspective, it helped us understand what the FAQs would be before we began canvassing or even writing. And I think it's fair to say that once we launched the campaign and the campaign FB page, posting there built up the BAF FB page very quickly."

"Having that platform in place (the Facebook group) as a resource for reliable information, which many hundreds of concerned parents had come to rely upon, gave the campaign a great jumping off point. It also enabled the word to get out about the official Build Arlington's Future site as it matured over the course of the short campaign."

"We envisioned the Facebook group as a respectful place where people could ask questions, share information and make their voices heard about the overcrowding issues that had many of us concerned.

"As we moved from a parent group to a more organized campaign team, those principles still held true and people continued to use the page as a way to inform their opinions. Personally, I was very much for an East Arlington Middle School until I was able to engage in and witness the discussion about the issue in the School Enrollment group.

"In the end, the information there helped convince me that the all-town sixth grade really was the better option. I think it says a lot about our town that even though people disagreed at times, the conversation remained relevant, thoughtful and most importantly, civil."

"The Facebook group, for me, was an invaluable archive of relevant conversations, rather than the typical usage as a real-time source of breaking events.

"The medium was most successful in that it was reflecting and archiving informed and useful perspectives, and provided a finger on the pulse of several hundred people's thoughts and opinions over a span of months.

"Once I started seeing it from the inside, it was clear how painstaking it had been to preserve this thoughtful and respectful forum while driving for meaningful solutions. IMO, these were the greatest ingredients to the success of this movement, more so than the generic medium of social media."

Jane Morgan, who commented earlier for this story, added:

"The tone of the Facebook group has been one of education and inclusion from the beginning. While there have been threads that have really displayed the diversity of opinions in Arlington, people have been respectful and engaged and many questions have been answered. Many posters are exceptionally committed to being correct and being able to cite sources. Facebook is a good medium for this with embedded links and a conversational tone."

For financial information regarding the debt exclusion questions, click here >>

May 28: Opposition emerges to Minutemen rebuild on ballot-question vote

Opinion: Two cases for a no vote for Minuteman | Vote yes on three school questions June 14