Candidates tell why participating in local elections is important 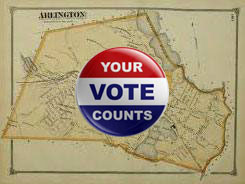 All 13 candidates in contested races for the April 10 town election were asked to express in one sentence the importance of voting in local elections. Comments by those who responded follows.

The enthusiasm expressed may not return the town to 1960, when a remarkable 95 percent turned out in Arlington for the national election that saw John F. Kennedy rise to the top, but one might hope for a better town-election turnout than we have seen in the last decade.

A. Matthew Pallett: "Voting in local elections, with knowledge of the candidates, is one of the few civic duties we have left and is important as it shows pride in their community and the democratic process as a whole."

Jim Flanagan: "Voting locally is important because every decision elected officials make impacts you as a resident in some way, and your vote is your voice in helping to steer those decisions."

Ian Jackson: "One should vote in local elections because of the increased influence."

Andrew O'Brien: "I believe in local elections because our schools roads sewers and water have an immediate impact on our lives. Our representative government does a great job, but I wish that Arlington could have a democratic [open] Town Meeting where all citizens could vote directly on the issues.

Cindy Starks: "Voting and letting your voice be heard is important whether it is local, state, or national; it is our duty and our right."

Jeff Thielman: "Voting in town elections gives us a stake in local government where decisions of elected and appointed officials impact us more directly than those made at any other level of government."

Joseph A. Curro Jr.: "I believe it is extremely important to vote in local elections, as local government more directly affects our lives on a daily basis and is more responsive than any other level of government."

Joseph Curran: "I will let my [voting] record speak for itself."

Robert Tosi Jr.: "I know you requested one sentence, but I am compelled to respond more fully. My record of voting in every election should speak for itself about how much I value the right to vote.

"We live in a democracy, and everyone should do their best to learn about the candidates and the current issues. Local politics affects everyone's life on a personal and daily basis and more people should exercise their right to vote that Americans have fought and died to secure and protect."

Steve M. Byrne: "I believe not only local, but also state and federal elections are important to all of us. Our right to vote is something I feel everyone should exercise as often as possible."

Maria Romano has not yet responded.

Kevin Feeley: "An individual's right to vote is the fundamental principal of a democratic society. It is very important that every citizen exercise this right."

Martin Thrope: "The local level is where your vote will have the most impact on many aspects of your day to day life, but only if you use it."