The 1,086 margin was wider than some expected.

In the lone contested race in the election, Tosi Jr. faced DeCourcey for a three-year term. For Tosi, it was his third try for the board.

The DeCourcey campaign sent an email at 3:30 p.m. Election Day reporting turnout is "very low." A similar plea came from Select Board member Joseph Curro Jr. at 5:30 p.m. The average turnout in town elections in this century has been 21.4 percent. Turnout in the 2018 town election was 15.86 percent.

ACMi was broadcasting returns as they came in to the clerk's office after 9 p.m., but YourAlington reported the overall results first at 8:55, based on numbers received by the DeCourcey campaign.

Tosi has lost two previous runs, in 2012 and 2014, for what was then called the Board of Selectmen, the last by just 33 votes. He has a long history of public service. See who is supporting him >>

DeCourcey, an attorney who has significant experience on the Finance Committee, is making his first Select Board run. See who is supporting him >>

They sought the seat held by Clarissa Rowe, who was named in December after veteran member Kevin Greeley died the previous month. She did not run.

"I am grateful to the voters of Arlington for electing me to the Select Board. Although the turnout for a local election is often limited, the people who vote are informed and involved. They care about the choices facing Arlington. I want to thank all voters who engaged in our democratic election process last Saturday by turning out in numbers that exceeded all annual local elections since calendar year 2013. For my part, I am honored that nearly 60% of those voting showed confidence in me to serve the Town as a Select Board member.

"I am also thankful to the volunteers – from old friends to people I’d never met before – who worked on my campaign. Their tireless energy and can-do attitude was incredible. Even more impressive is their devotion to Arlington. It’s this kind of hard work and volunteerism that makes Arlington a strong and welcoming community.

"Going forward, I will be an independent thinker who works collaboratively with my fellow Select Board members. To our town residents, I will listen to your concerns and let you know where I stand on the issues. Thank you and I look forward to serving all residents for the next three years."

"Despite everyone’s best efforts, we came up short in the final voting. On election night, I downplayed the numbers, but I am honored by the almost 2,500 voters who voted for me, because they believed in me and wanted an Independent voice on the Arlington Select Board.

"What a journey we’ve been on together! Some of you have been with me all my life, while others have been on board only in recent years or months. I appreciate the support of ALL of you. Over 125 different donors helped to fund this campaign. Heartwarming letters to the editor and endorsement quotes moved and inspired all who read them.

"Dear Friend writers, many of whom included personal notes, reached many Arlington residents. Callers spent many nights and days calling voters. Hearty sign holders braved the cold on numerous Saturday mornings and more. On Election Day, some sign holders voluntarily stayed an extra hour or more when another volunteer was not available and some did multiple shifts. 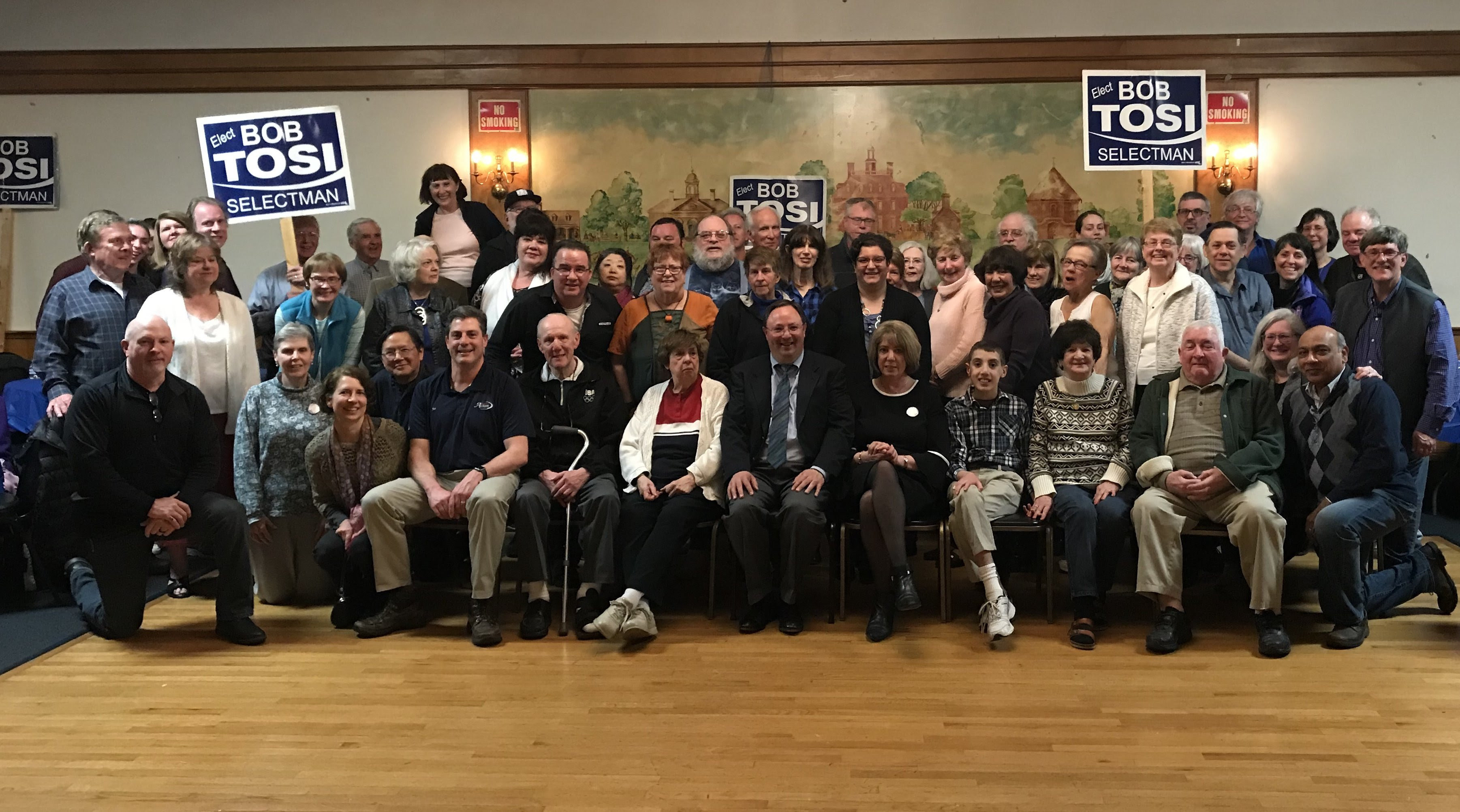 "And thanks to all the committee members’ spouses and significant others for their help and support. They include John S., Susan R., Joe C., Melissa K., Paul S., Reiko T., Joyce R., and Nancy F.

"Special thanks to my father, Bob Tosi Sr., for his many calls, notes, and other efforts. He did this despite dealing with a spiral fracture to his foot. When I was hesitant about embarking on this campaign due to parent care issues involving my Mother with Alzheimer’s, he bravely said not to let that keep me from running. It still was not easy as she declined and had many difficult days/nights at some of the most inopportune times, but we persevered.

"I am still analyzing the results. Our race was the only townwide contested race. Unfortunately, only about 20% of voters went to the polls, despite great weather. With all five of the sitting members of the Select Board, four former Selectman, eight current or former School Committee members and more all supporting DeCourcey, he still was only able to get 3,500 votes in a town with about 30,000 voters. The process was sadly more of a selection than an election, with town leaders deciding who they wanted to fill the open seat.

"If you have thoughts or suggestions on what we could have done better, I welcome your thoughts and analyses.

"I am thankful and humbled by your support. Together, we did everything we could. I met parents during mini-visibilities at all seven elementary schools. I met with seniors at the Senior Center and everywhere I could around town.

"Many contributed to the social media buzz on Tosi. We ran sticker ads for two weeks on the front page of The Arlington Advocate, ran ads on YourArlington and Facebook and sent a robo call to voters’ home numbers.

"We made thousands of personal calls and sent many emails. We maintained a professional and updated website. We sent a mailing of substance to active and recent voters. We ran a professional and respectful campaign from beginning to end.

"Jimmy Tingle, the comedian of 60 minutes fame and more, recently ran for lieutenant governor of Massachusetts. His regular campaign speech included how he would feed the hungry, clothe the naked, and shelter the homeless. I have been doing these works of mercy along with visiting the sick, honoring the dead, and giving alms to the poor all my adult life and will continue to do so with some humor to help as needed.

"Hope to see many of you at Sunday’s Parade, which starts at 2 p.m., or around town through the many ways we all contribute to make Arlington the community we call home."

Unopposed for three-year seats on the School Committee were Len Kardon, who received 4,121 votes, and Kirsi Allison-Ampe, who got 4,223.

Also unopposed were John Leone for Town Meeting moderator, who received 4,872 votes; Robert Greeley for the Board of Assessors, who got 4,526; and Gaar Talanian for the Housing Authority, who tallied 4,184.

The town's unofficial summary records how Town Meeting candidates did >>

There is also a ballot question: “Shall the board of selectmen of the town be authorized to issue 1 additional license for the sale of all alcoholic beverages not to be drunk on the premises?"

The Governance Task Group of Envision Arlington offered Town Meeting candidates the chance to submit statements so voters can make informed decisions. The group does not endorse candidates.

Find out how meeting members voted here and check on the left side for all years back to 2002.

Candidates' night, sponsored by the League of Women Voters of Arlington and Envision Arlington, was held Wednesday, March 27, providing the community with an opportunity to learn about the candidates running for major town offices in April. An estimated 160 people attended.

The last day to register to vote in this election was Friday, March 15. The clerk’s office was open from 8 a.m. to 8 p.m. that day for voter registration. For additional election information, including absentee ballot information, visit arlingtonma.gov/elections.

The clerk's office drew names for the position on the ballot on Thursday, March 7.

Here is the order in which the candidates for major offices will appear on the ballot:

Board of Assessors (3 years)

The order in which Town Meeting candidates will appear is here >>

AN ACT AUTHORIZING THE BOARD OF SELECTMEN OF THE TOWN OF ARLINGTON TO PLACE UPON A TOWN BALLOT A QUESTION TO INCREASE THE NUMBER OF LICENSES FOR ALL-ALCOHOLIC BEVERAGES NOT TO BE DRUNK ON THE PREMISES.

SECTION 1. Notwithstanding sections 11A and 17 of chapter 138 of the General Laws, the board of selectmen of the town of Arlington may cause to be placed upon the ballot at a town election held in the year 2019 the following question:

“Shall the board of selectmen of the town be authorized to issue 1 additional license for the sale of all alcoholic beverages not to be drunk on the premises?

SECTION 3. This act shall take effect upon its passage.

-- Select Board (one three-year seat: Clarissa Rowe was appointed until April after Kevin Greeley died; those running seek the permanent seat);

-- Board of Assessors (one three-year seat: Robert Greeley);

All potential candidates for Select Board, School Committee and assessor have been asked to respond to questions for a brief profile. The following have been published. Others have not responded:

March 26, 2019: NO-SHOWS: The public needs to hear from all candidates

Here is a calendar of legal deadlines or events leading up to the election, provided by the town clerk's office >>

This news announcement was published Wednesday, Feb. 6, 2019, and updated April 11, to add Tosi statement, as well as April 13, to add DeCourcey statement.