What do Center landlords have in mind? So far, we have only bits, pieces 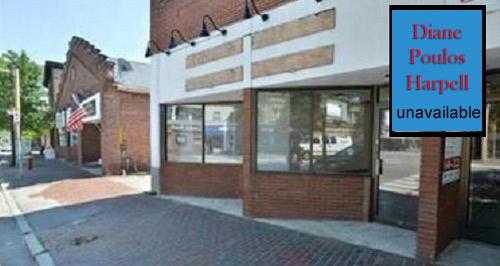 Vacant storefronts managed by DPH Realty on the eastbound side of Mass. Ave., in the Center. Diane Poulos Harpell has not been available to comment.

UPDATED, Aug. 20: August light still shines brightly on a dark subject -- empty storefronts in Arlington Center -- and as a fall public meeting to address the issue looms, two of three key landlords may be inching forward with information about their plans.

The emphasis is on "may be." Only one of the three landlords has responded to requests for comment from YourArlington about a variety of issues. One has not responded to a registered letter with questions.

Patricia Simboli of ACS Development, Chelsea, has spoken with YourArlington. James Cohen of Marco Realty, Brookline, declined to meet. Diane Poulos Harpell of DPH Realty, of Cambridge has ignored numerous phone messages and a letter, which a return receipt shows her office signed for.

On the tad more informative side, Town Manager Adam Chapdelaine has spoken to each, and their comments to him provide glimpses about the storefront situation in the Center.

Of the three landlords who many the majority of empty storefronts in the Center, one vacant for three years, Chapdelaine says he feels "confident" that the two who are working actively to get tenants are Cohen and Simboli.

The manager said the latter told him she was in discussions with multiple food-related businesses. Simboli manages the row of Broadway Plaza properties from CVS, which closed in June; Common Ground, reopened after a liquor-license violation; Madrona Tree, which closed July 31; Arlington Optique Boutique, which continues; and the former Artful Heart, which closed June 1 and moved to Medford Street.

Asked whether the three Center landlords expressed to him a lack of interest in pursuing mixed-use development, Chapdelaine said he had not "explicitly discussed" the issue with Simboli.

"In regard to Mr. Cohen and Ms. Poulos," he told YourArlington on Tuesday, Aug. 16, "I would say that after speaking with them, neither are actively pursuing mixed-use development on their sites."

In an Aug. 3 report, headlined, "Are landlords squeezing store owners with larger plans in mind?" YourArlington reported facts conveying the possibility of such use. Simboli, the one landlord who discussed the matter with the website, appeared to be unaware of changes made by Town Meeting last spring to make such developments more likely.

These details contrast somewhat with a report by a citizen group Support Arlington Center following an Aug. 11 meeting with town officials. It reported: "The landlords expressed disinterest in mixed-use development, quashing speculation that perhaps the vacancies were part of a plan to clear buildings for that kind of a change."

Whether lack of expressed interest ends speculation is a matter of debate.

In response to questions about the group's report, Jeanne Tift, wrote in an Aug. 16 email that town officials told them that one of the landlords is open to renting to food-based establishments and is trying to recruit a tenant from another town to open a location in Arlington.

"One of the hurdles is the expense of adding a kitchen to a property that does not already have one," she wrote. "I don't know if the other 2 are opposed to any kind of food-based business."

Further, she wrote, town officials told us that "no landlord had expressed interest in developing mixed-use property. I'm not sure about differences of intensity. It may well be that some or all are open to it without actively seeking it out."

Mixed use refers to developments that have businesses on the ground floor and residents living above.

Perhaps the matter can receive more clarity at the public meeting to address vacancies, to be held in September or October. Details have yet to be worked out.

No landlords were present at the Aug. 11 meeting, and the group declined to discuss specific landlords by name, "for liability concerns, etc."

Present at that meeting were Planning Director Jenny Raitt, Chapdelaine and Support Arlington Center members Alyssa Clossey, Nicole Knobloch and Tift. The manager said he informed the citizen group about Simboli's effort to reach out to food businesses after the Aug. 11 meeting.

In its report of the meeting, Support Arlington Center made these further points:

-- Its survey of what the public might want to see fill the vacancies pointed to high rankings for restaurants, cafes and bakeries;
-- Reasons for individual vacancies remain unclear, "other than a desire on the part of the landlords for higher rent. We will have to see whether Arlington can support higher rents than are currently being received";

-- "The vacancies are also not due to an inappropriately low property tax rate; the properties have continued to be assessed, and the assessments raised, regularly."

-- The next public meeting to present the latest proposals for the redesign of the Center streetscape, from Pond Lane to Mill Street, is set for 7 p.m. Thursday, Sept. 22, at the Senior Center.

Last, some good news: Tony's All-Sport Barbershop, which had been in East Arlington, plans to open up at 721 Mass. Ave., the former Coyote Impressions space, on Friday, Aug. 19.

NOTE: Many of the business sources interviewed for the Aug. 3 story declined to be identified by name, saying they feared retaliation from landlords. If you have a story to tell, contact the publisher >> He will need to know your name, but your confidentiality will be maintained.

Do you have an opinion about this subject? Express it at the comment link below this viewpoint >>