Are landlords squeezing store owners with larger plans in mind? 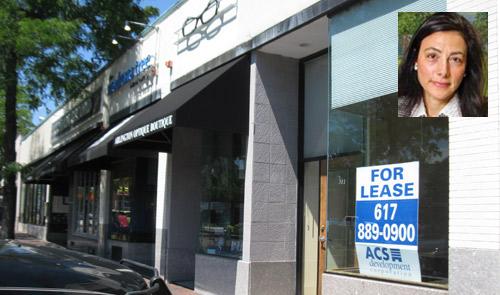 UPDATED, Aug. 4: What's going on with businesses in the Center? Plenty.

Snapshots of reality this summer offer stark glimpses beyond shopping: As one retail store moved out in June, a landlord shouted profanity in front of outside diners eating at Broadway Plaza tables. By the end of July, a different restaurant with the same landlord closed, three months before its lease is up.

Across Mass. Ave. Tango faces a stiff rent increase. Next door and nearby are vacant storefronts, one of them empty for at least three years.

Three landlords responsible for the lion's share of the Center's vacancies -- 10 valued at $6 million -- appear to be comfortable with empty spaces that bring in no rent.

The landlords involved -- Patricia Simboli of ACS Development, Chelsea; Diane Poulos Harpell of DPH Realty, Cambridge; and James Cohen of Marco Realty, Brookline -- likely know, but they remain cautious about their plans or decline to comment or even respond. That makes the answer to that basic economic question hard to gauge.

Here is one possibility: They are pushing out owners with rising rents in the hope of taking advantage of changes in the town's master plan aimed at encouraging mixed-use development. That includes projects that can have a business at street level with apartments above.

Simboli, the one landlord who agreed to speak with YourArlington about Center vacancies, said in an interview July 19 that she was not pursuing a mixed-use strategy and seemed not to know about changes to allow such development permitted by Town Meeting this spring.

Possible reasons that properties remain vacant (not a definitive list):

-- A space is inappropriate for a particular business.

-- Rents offered are too high for prospective tenants.

-- A landlord is "waiting for right tenants."

-- The issue is attributed to the business cycle.

-- Poor market research: Yummys! failed after it was situated across from successful Chilly Cow.

-- Too many CVS stores: Arlington two large ones, and a third in the Plaza had to go.

-- A landlord is willing to take a loss on a property for tax reasons.


Cohen declined to comment about the issue. "I don't know you," he said in a phone call in early July, adding he preferred to talk face to face. He declined an offer to meet in his Brookline office, saying he was going on vacation.

Poulos Harpell has not responded to numerous calls for over a month. A visit to her Porter Square office in July indicated no one had been there in a while: Mail had piled up.

In a 45-minute interview July 12, Town Manager Adam Chapdelaine and Planning Director Jenny Raitt said they knew of no plans for mixed-use development in the Center, but said they would welcome any proposed to the town. Raitt said such a development would be allowable under zoning districts in the Center, which are B3 and B5. See the zoning map >>

For town, a 'huge priority'

"This is a huge priority for us," Raitt said, referring to making sure that Center storefronts have tenants.

She was heartened toi see the formation of the group Support Arlington Center, noting it has increased citizen involvement. Read aboiut the group's activity detailed here >>

To deal with the issue, Chapdelaine planned to meet with three landlords. In June, he met with Poulos Harpell and Cohen in July. As of Aug. 3, he had not met with Simboli; he said she had postponed twice.

After meeting with Cohen, The Boston Globe reported July 31, Chapdelaine said he was "confident" the landlord "wants to put people in the storefronts," but said Cohen is holding out for types of businesses that don’t already exist in the center. The manager was not more specific.

In the July 12 interview, Chapdelaine said that he was singling out the three landlords only because they have the most vacant properties.

Asked why landlords would not fill vacancies and what would be the benefit to leave them empty, the manager and planner agreed the answer may be "many reasons."

Whatever the reasons, Chapdelaine said he was taking two approaches -- collaborative and regulatory, with an emphasis on seeing how the first one works before weighing in with the second.

After that, he would have Ted Fields, the town economic-development planner, work with them.

Finally, he said, he would consider regulatory options. Massachusetts does not appear to have a legal lever in this area, he said, so he has asked town counsel to develop a bylaw, which might include fines for landlords whose properties stay empty too long.

The proposed bylaw could be brought to a Special Town Meeting planned for fall, to deal with school issues, but it is more likely a measure for next spring's meeting.

Overall, he said, "There is limited authority for the town to do all that much, given that its private property."

The answer takes you beyond Arlington, because the town has no monopoly on vacancies, both Raitt and Chapdelaine said.

Raitt pointed to Brookline, where she lives, noting a Walgreens empty in Coolidge Corner since June 2015.

Look at what San Francisco tried, she suggested. In 2009, the City by the Bay required owners of vacant buildings to register with the city and face fines if they don't follow the rules. See a news release >> The legal framework was amended five years later >>

Returning to Arlington, the issue of vacancies in town is not new. In August 2014, YourArlington's publisher drove from the Lexington line to Cambridge listing storefronts that were then vacant. See the listing and descriptions >>

On that list, note some familiar names -- and some successes. The former Broadway Diner space, for example, is now owned by the Housing Corporation of Arlington and is the home for the Arlington Food Pantry, used by Food Link, a nonprofit that rescues left-over food.

And then you come to the Center, where Ron Reisz, a long-established optician, is surrounded by vacancies. One of them, at 450 Mass. Ave., is the former location of Scugnizzi, an Italian restaurant reported in August 2013 "abandoned" by the owner.

It has been vacant for three years, and there is no sign in the window letting a potential buyer know whom to call.

In 2016, why were 14 of Northampton's 204 downtown storefronts vacant this year, as of March 23, according to city data? Five of those were on Main Street, the city's major artery of commerce.

Before she closed Madrona Tree on July 31, owner Tanya Abraham said she inquired with DPH Realty about moving to 450 Mass. Ave., but she said Poulos Harpell was not interested in leasing to a restaurant.

What would the landlord like to see in that space? Because she has not responded to phoned requests for comment, it's hard to know. On Aug. 3, YourArlington sent her a registered letter with questions in an effort to learn about plans for her numerous properties.

One aspect of Poulos Harpell's business activity in Arlington appears to be a plus, overall: On June 30, the Charles L. Poulos or Poulos Trust owed $17,459.64 in back taxes on six Arlington properties. Town Treasurer Stephen Gilligan reported she paid more than she owed -- $18,063.38.

Had taxes not been paid, Gilligan said in a June interview, his office would have pursued a series of time-consuming procedures that could lead to the town's taking the land.

"We give the taxpayer the opportunity to pay off the debt," he said. As a matter of practice, he said, the town does not issue a notice of foreclosure after taxes go unpaid for six months.

As a general rule, he said, before the town forecloses, three years must pass and the taxpayer must owe $20,000 or more.

Asked why some landlords choose not to pay taxes, Gilligan suggested that landlords may get advice from accountants to take a year-end tax loss. He said he often sees debts owed in December paid off in January, allowing a tax deduction for the calendar year.

Let us return to Simboli, the landlord who was willing to discuss a number of issues, some of them briefly, in July.

Asked what is behind Center vacancies, she focused first on CVS, which closed June 18.

"Very simple," she said, "CVS changed its business model." It developed a drive-through near the high school and a large store in East Arlington, targeting the Plaza store for closing.

Asked why Artful Heart moved from the Plaza to Medford Street, June 1, she said: "Ask her," referring to owner Carla Dorato, and called the matter "confidential."

Dorato declined to comment in detail on the advice of her attorney, John Leone.

Turning to Madrona Tree, which at the time of the interview had a lease until November, Simboli said: "It's her choice."

She was referring to owner Abraham, who declined to comment in detail to YourArlington on the advice of her attorney, Leone.

Both Dorato and Abraham allowed that each had disputes with Simboli.

Simboli's view contradicted that. She said she has had "good relationships with tenants."

She called all of her company’s properties in Broadway Plaza "very attractive spaces." She said some had connections going back "50 years." The town's database of properties say the Simboli family bought Plaza properties in 1990.

She said July 19 she is "not worried about [filling] those spaces" and said she has "wonderful prospects" for CVS. WickedLocal reported Aug. 1 that the 5,233-square-foot storefront could take a year to fill.

As for Center challenges, she noted a lack of parking and said she favors a solution that "favors all businesses."

She said one is valet parking, a suggestion she said she has made to Fields, the town's economic planner. That is a service to park a shopper's car for a modest price, using such spaces as the ones now used by taxis.

Simboli, whose company signed a lease in 2011 for the mammoth FBI center in Chelsea, she said she has 25 years of experience in real estate, all with her company, ACS. The FBI project advanced in 2013 >>

NOTE: Many of the business sources interviewed for this story declined to be identified by name, saying they feared retaliation from landlords. If you have a story to tell, This email address is being protected from spambots. You need JavaScript enabled to view it. He will need to know your name, but your confidentiality will be maintained.

This news report was published Wednesday, Aug. 3, 2916, and updated Aug. 4, to correct Common Ground date and add a clarifying sentence about mixed use.