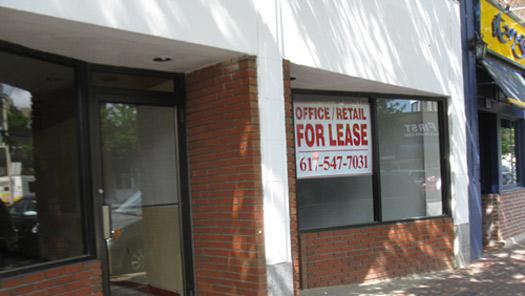 Hard by the successful Tango Restaurant are empty storefronts managed by DPH Realty of Cambridge. They are formerly spots for Sweet Haven Candy Store and United Shoe Repair.

Alyssa Krimsky Clossey, Nicole St. Clair Knobloch and Jeanne Tift are co-founders of Support Arlington Center, a group reflecting the aim expressed on their website: to keep the Center vibrant with thriving, diverse small businesses. None owns a business in town.

In an account of the meeting on their website, the co-founders said they were "heartened and pleased to hear that the town is taking the challenges of the Center very seriously, making some important steps already, and considering plans and strategies to address the empty storefronts and to improve Arlington Center's infrastructure, more generally."

Significantly, they wrote, town officials are in the process of collaborating and working with landlords.

The manager confirmed July 12 that he met in June with Diane Poulos Harpell, whose DPH Realty of Cambridge manages a number of empty properties on the right of the eastbound side of Mass. Ave. He plans to meet with other Center landlords.

Town officials said at the July 7 meeting that they are having internal discussions with department heads to come up with ideas, including a proposed bylaw or guidelines, which would be brought to Town Meeting for a discussion and vote.

Town officials plan to hold a public community meeting in early fall to address the challenges of the Center's storefront properties. In this meeting, people will be encouraged to ask officials questions and learn more about town plans for this key business area of town.

To focus on the nagging, empty feeling, Support Arlington Center has published a listing with notes and photos of vacant properties on its website. See them here >> Fourteen along Mass. Ave. and Broadway are shown.

Town officials also plan to have a meeting in the early fall to review Arlington Center's outdoor space-improvement plans and reconstruction of the roadways. A meeting in June updated the public about plans for the Center, including Broadway Plaza.

Co-founders of Support Arlington Center plan to have a follow-up meeting with the town officials in August to check in on progress before the fall community meetings.

During the July 7 meeting, co-founders of Support Arlington Center asked what Town Hall and the community can do to start to improve the current situation.

The group conducted an online survey seeking feedback about the current situation in the Center. Based on its results, as of June 27, Support Arlington Center co-founders reviewed the survey data and the general feedback from users with officials at the meeting.

One question asks: Would you like to see "pop-up" window displays of advertisements for Arlington local businesses, cultural offerings, or art work in empty storefronts, during this transitional time? Eighty-six percent answered yes.

It was an idea that has met with success in the past -- in a then-empty storefront on Medford Street.

New site has some news

The trio's website has already reported some news -- one more Center business has closed, and another storefront plans to be occupied this summer.

Wild Child, at 5 Medford St., closed its doors Sunday July 10, as it ended a going-out-business sale.

Owner Erica Walker declined to discuss in detail why her shop closed, but she did say this month that she had a positive experience with her landlord.

Coyote Impressions went out of business by late June 2015, and then opened briefly last December for the holidays. You can still reach its online site.

Clossey has been a town resident since 2000. Reared in Cambridge, she calls Arlington Center her "home away from home" and loves the hardworking, warm, friendly owners of the retail stores there. She does not shop in malls, and much prefers to support small businesses.

Knobloch is a Town Meeting member and moved to Arlington in 2010 to join her husband, who moved here in 1994. "One of the first things she loved about Arlington," she write at the group's bio page, "was the opportunity to meet and get to know the owners of local stores and restaurants. She also loves the proximity of those businesses to open space treasures like Spy Pond and Menotomy Rocks Park, and believes the combination of natural beauty and a vibrant commercial center supports Arlington as a special community."

Tift moved to Arlington in 2002, and loves living in the Center, with the opportunity to walk to so many places and run into friends and neighbors often. Originally from Georgia, she loves her adopted home of Arlington, and has high hopes for the Center to remain and grow as a vibrant, exciting location with a diverse community.