Arlington's culture draws a map: Can it draw dollars? 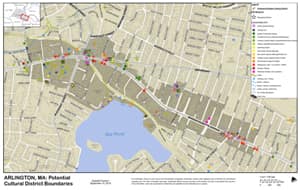 UPDATED, April 6: Concord did it. So did Cambridge. Why not Arlington?

In an effort that has occurred largely behind the scenes for a couple of years but is now public, the town aims to add its name to 32 other municipalities statewide that have mapped out a cultural district within their borders.

An estimated 50 people gathered at Arlington Center for the Arts on Wednesday, March 30, to take a required step in a march toward defining such a district here.

EXPLORING POSSIBILITIES
A factual look at hopes and realities

To see the map at left from the town Planning Department full size, click here or on the map >> (It can load slowly; be patient)

Overall, the evening pitted the wide-ranging enthusiasms of those present against the decided realities of Mass. Ave., the thoroughfare that has long shaped the town's economic destiny.

You heard the excitement as those present offered a broad swath of Arlington's cultural possibilities.

You heard it as Stephanie Marlin-Curiel, a cochair of the Commission on Arts and Culture (ACAC), read what a cultural district might mean on one imagined evening.

In the background, if you listened, you heard the unspoken question: Can the avenue really take the shape that those present want?

What is a cultural district?

But let's not get ahead of ourselves. First, let's look at a cultural district is, and what might Arlington's look like?

The district, a creature of the Mass. Cultural Council, a state agency, is a specific geographical area that has "a concentration of cultural facilities, activities and assets. It is a walkable, compact area that is easily identifiable to visitors and residents and serves as a center of cultural, artistic and economic activity."

Those involved in the Arlington effort have produced a tentative map, published with this story (click to open the large version), showing the proposed district, stretching from Mill to Milton Street. Note the legend, which indicates the wealth of town assets.

Nothing happens without local buy-in, so the state process includes requiring a managing partnership, and those involved have taken that step. The partnership includes the Arlington Center for the Arts, the Chamber of Commerce, merchants from the Center to Capitol Square, the historical society, the Dallin Art Museum, the Friends of the Drama and the town libraries.

What are the benefits?

OK, so we have a walkable area with a series of assets identified on a map -- how does that benefit the town? 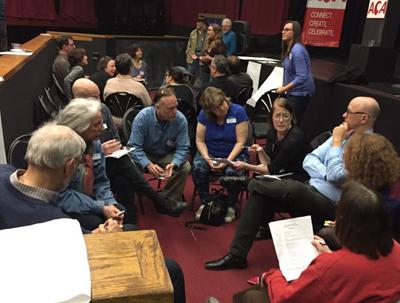 Consider these possibilities, touched on in a news release before the meeting. A district would:

-- "[E]ncourage greater collaboration among cultural organizations, expand awareness of Arlington residents and potential visitors about our cultural assets, and leverage cultural and business resources to brand Arlington as a cultural destination.

-- Promote "commitment from the town to nurture present and future arts and cultural initiatives, and brings positive economic benefits to cultural institutions and local businesses.

-- "[C]ould also place Arlington’s cultural community in a stronger position to apply for grants and other financial support in the future."

That's all to the good.

Let's be clear, though. As to the last point, the Mass. Cultural Council says: "The statue that established the Cultural Districts Initiative legislation does not include a provision for grant funds or other financial rewards to communities, at least for the time being. (See under Resources for Cultural District.)

Thus, the state agency provides a process to define how culturally attractive a town is, but leaves the matter of economic benefit that derives from those assets up to the usual market forces.

Still, to be fair, balance that reality against what the MCC calls its cultural investment portfolio: "State investment in nonprofit arts, humanities, and science organizations yields returns in economic impact and increasing public access, according to the information gathered from the Massachusetts Cultural Data Project."

What does that portfolio say about how the arts bring a town economic benefit? See the general answer here >>

It includes this example: In fiscal 2014 MCC invested $4 million in 400 nonprofit arts humanities and science organizations though the investment portfolio. These organizations pumped more than $1 billion into the state's economy through direct spending and employed 16,700 full-, part-time workers who paid more than $32 million in payroll taxes.

How could this effort directly aid Arlington? That remains to be seen.

What others have done

Apart from underlying skepticism about the impact on the economy, at the ACA on March 30, you chiefly heard the voices of hope. You heard:

Andrea Nicolay, director of town libraries, narrate a series of slides showing what other towns have done with their cultural districts. They included enticing imagery from nearby Concord and far-away Portland, Ore., and not-so-far Belfast, Maine.

You heard Marlin-Curiel's fanciful Arlington arts evening as "the avenue is coming alive. Outdoor lights cast a warm glow over a sidewalk cafe where people dine to the music of a stand-up bass on the corner a few paces away. A little further down the block, people are lined up for a movie, others are milling on the street with ice cream, parents are out for a craft night, and live opera can be heard coming from the art gallery across the street ....

"... Others are heading straight up the avenue for an author’s salon, concert or theatre performance. And a cyclist traveling in a well-marked lane, interrupts his commute home to grab a beer and listen to acoustic guitar and vocals in Broadway Plaza." (The "well-marked lane" drew some chuckles.)

You heard how arts groups coalesced in June 2012 in an event called Arlington Alive! That led to an annual summer block party, and activation of ACAC, which launched an events calendar.

After the audience broke into four groups to crowdsource what shape they would like to see the district take, you heard their ideas come tumbling out. Below, you can read a list of some of them.

The explosion of notions flowed freely, no doubt beyond the bounds of what the state might accept, but reflecting the hopes of the contributors.

Moving toward what is possible, what are the next steps to make the district a reality?

Barbara Costa, the other cochair of ACAC, wrote April 1 that the managing partnership aims to complete the written application to the state council for the five-year program. That involves seeking an endorsement from selectmen of a resolution within the next month or two.

Later, the MCC will send a representative for a site visit of the proposed district, before issuing a final decision on the district size and ultimate designation. "We’re not sure when that will happen," she wrote.

Costa emphasized that regardless of the ultimate district borders, any website listings or printed brochures/calendar of events will include organizations and businesses throughout the town, not just those within the district.

Ideas the ACA audience offered: What would you like to see in the proposed district?

(listed in no particular order)

-- better use of outdoor performance spaces, including the Town Garden

-- artist exchange with other towns

-- "happenings" along the bikeway

-- other auto-free days than Town Day during which Mass. Ave. is closed

-- extend farmers' market hours for those who can’t get there by 6:30; note how Winchester uses music and art

-- sidewalk poetry [unclear whether this is spoken or written or both]

-- buskers are permitted in town [comment: So why isn’t anyone doing it?]

-- use the Arlington High rebuild as an opportunity for the arts

This reportage/analysis was published Tuesday, April 5, 2016, and updated April 6, to include the ACA among the managing partners.