UPDATED, April 2: A coalition of groups favoring preservation of the Mugar site in East Arlington as wetlands made its voices heard to selectmen Monday, March 30. 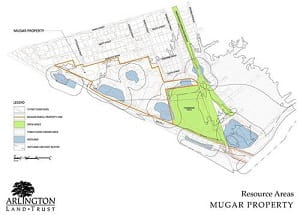 Clarissa Rowe, a former selectmen who is a prime mover behind Arlington Land Trust, and George Laite, long active in the East Arlington Good Neighbor Committee, declared their objections to the 219-unit, 40B proposal from Oaktree Development of Cambridge for the 17-acre site along Route 2.

Meanwhile, a representative of the developer has responded to the coalition.

"We are not against development or affordable housing," said Rowe, principal in Brown, Richardson & Rowe, a landscape architect. Both objected to the project’s impact on flooding and traffic.

Speaking a at citizens' open forum, Rowe asked the selectmen to:

-- Write a letter to the Mugar family, which has long owned the land and once proposed a Star Market there, asking for direct negotiations between family members and town officials;

-- Calculate Arlington affordable-housing and land numbers that could show whether a 40B project is possible in Arlington; and
-- Add a warrant article to this spring's Special Town Meeting, seeking a vote on the new development plan. The votes from 2000 and 2001 are not sufficient, she said.

Laite -- who worked as aide to state Sen. Bob Havern, a number of years before his death, last July, at 65 -- said the town has "met its legal threshold" to block a 40B project. He called the issue for the town "a matter of political will."

Among the thresholds a town much meet under Chapter 40B, a state law adopted in 1969 aimed at increasing affordable housing, is to have 10 percent of its housing be considered affordable.

Asked whether that is the case in Arlington, Town Manager Adam Chapdelaine responded Tuesday, March 31: "The town’s current percentage of affordable-housing units is 5.6 percent.

"However, that is not the only measure used by the state when determining whether or not a community has met its obligations under Chapter 40B. A community is also able to show that it has met its affordable-housing obligations by demonstrating that 1.5 percent of its eligible land mass is dedicated to affordable housing. Arlington feels that based on this alternative approach, it has a strong case to make to the State regarding the applicability of 40B."

Chapdelaine told selectmen that the town would hire an outside legal counsel for representation on this issue.

Laite called the plan by Oaktree development of Cambridge "not a very good one" because it is planned on a wetland and can only increase flooding and traffic in East Arlington.

He also noted the traffic impact on Dorothy Road, which appears on plans to be an access to the site.

Laite reflected back to the plans for the site in 2000 and that Havern, chairman of the Senate Transportation Committee, did not agree there should be a curb allowing access from Route 2.

Of the current plan, he said, "A great number of people are taking an active role."

In an interview last week Gwendolen G. Noyes, an Oaktree founder and senior vice president of marketing, said that before the company presents plans, its civil engineer is working on water issues. She called flooding problems "solvable."

The joint appearance of Rowe and Laite represent a combining of constituents who in the past have not always agreed but have been brought together to pursue common aims.

Rowe said the name of the coalition is "evolving." When the Facebook page was announced March 25, it was called the "Coalition to Save Mugar."

A subsequent post calls that "a first draft." The address is here >>

A subsequent Facebook page, posted March 31, is called Save Our Wetlands

The Facebook page says it will include regular post here called "What They Said," aimed at rebutting the developer’s claims.

The page cites YourArlington's report that Oaktree's its civil engineer "is working on the water issues." The Facebook page says: "David Albrecht, the Mugar's civil engineer since 2000, is actually working full time for Borrego Solar in Lowell, Massachusetts. It was apparent to the town's personnel that there had been no new engineering work done on the project since 2008."

Noyes's response is published in full, below.

Rowe told selectmen March 30 that the coalition seeks to know more about development plans as well as educate new residents, among many who have moved into East Arlington in recent years and may not know the history of the Mugar site.

She said residents should contact the coalition at her phone number (781-643-3156) and email (clarissa.rowe[at]comcast.net).

Discussion of the Mugar site may be included on the selectmen's agenda of Monday, April 13.

Meanwhile, Brian Rehrig of the land trust reported that the 2000 commercial-development proposal was two 150,000-quare-foot boxes of six stories, plus open surface-level parking underneath "so they were essentially on stilts."

Chapdelaine told selectmen March 23, that the developer plans the units on seven of its 17 acres with conservation protection for the rest of the tract.

The 40B project would have to be considered by the town's zoning Board of Appeals, not the Redevelopment Board.

Noyes commented at length March 31, citing what she called "three critical inaccuracies based on other people's quoted assumptions:

"One: David Albrecht is a civil engineer who has worked in a prior office for the Mugars. He is now continuing his work as a civil engineer at Borrego Solar. As he has years of familiarity and large amounts of prior data for the site, Oaktree chose to retain him for the civil engineering for the property.

"Two: There has been considerable investment recently in the civil design of the project. We have a high-priority goal to alleviate the neighborhood flooding problem through the engineering solutions of our proposed plan. The plan has been newly designed to fit the current housing design for the property, and concurrently reduce the adjacent homes' flooding. (Groundwater is not in our purview). The proposed housing is sited on the high ground of the property, not in the flood zones.

"Three: We have also worked recently with a traffic engineer to design a viable traffic-congestion-relieving plan that would enable the State to improve Rt 2 and provide project residents direct access to the site. This, too, is an endeavor that has included constructive and productive consultation about the current project with the State Department of Transportation, and could be pursued if the Arlington community wished to do so as a second phase of the project's approval."

Further, she wrote in an email, "... we believe that there are 3 major, near-term and sustainable design benefits that Arlington citizens can gain from this project:

Acknowledging, as she did last week, the "contentious history" of development proposals at the site, she added:

"We also believe that the new design we've made is an optimal, realistic, environmentally responsible response to the realities of this privately-owned, hydrologically challenged, trash-strewn property. A balanced and fresh review by the Arlington citizenry would be most valuable and welcome.

"We would be glad to present these benefits to Arlington people interested in getting an accurate understanding of what's actually being proposed for their community."

OPINION: Belskis's history of 40B in Arlington

This summary was published Tuesday, March 31, 2015, and updated April 2 to add a link to opinion.