Films, dreams and economic possibility in Arlington: A look behind the screen 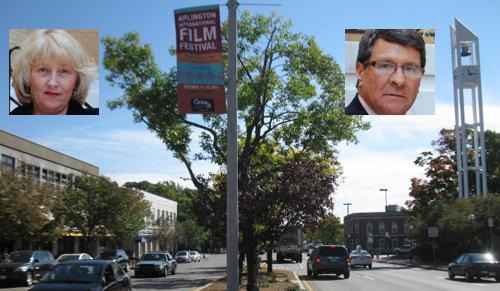 A film festival flag offers its reminder at Mass. Ave. in the Center, as do founders April Ranck and J. Alberto Guzman, inset, in many town venues.

Can the story-telling magic of movies rub off on Arlington's economy?

Ted Peluso, who has watched businesses develop over many of his 81 years, think so.

"They're just everywhere," he said of J. Alberto Guzman and April Ranck, cofounders of the Arlington International Film Festival (AIFF).

And not just Oct. 15 through 19, when the fourth annual festival takes place at the Regent Theatre, but throughout the year.

The couple who appear to have networked with everyone here and nearby since 2010 agree with Peluso, but the overall project takes time to build.

"Right now, we see a direct correlation to filmgoers visiting our local multicultural restaurants and becoming familiar with Arlington's historical sites," Ranck said. "Bringing people from the greater Boston area into Arlington, is a likelihood that they will return to shop, go to the theater and the restaurants.

"Also, the businesses that support AIFF have an opportunity for greater visibility. We believe by continuing to network with businesses as well as organizations, we will continue to grow the network where the economy will definitely be affected."

A 2013 study done for the town Planning Department backs them up. See this account's conclusion.

This is not a story about a consultant's study, as informative as it may be. This is about how a childhood dream is, in turn, becoming part of Arlington's future.

When Guzman was about 10 years old and attending a private elementary Catholic school in his native Colombia, he saw a Charlie Chaplin film. He can't recall which one, but he remembers its influence: He mimicked the silent British actor's distinctive gait. Perhaps the film was "The Tramp." See the walk on YouTube >>

To make a film like that, to be an actor like that .... The feeling drove him for years.

As an adult, Guzman settled in Chicago after living in Venezuela, Chile, Mexico, South Africa and Israel. He reported world events for Radio Todelar, founded the cultural/political newspaper El Otro ("The Other," a title that suggests his embrace of the immigrant experience) and volunteered at the well-regarded Chicago Latino Film Festival.

"These experiences heightened my appreciation of freedom as well as of the importance of filmmaking as a means of cultural, social and political expression," he has written.

The magic of film

In 2003, he moved to Arlington. "Excited by the diversity and the historic significance of the town," he wrote, "I re-engaged my childhood dream in a big way -- so big it would take no less than seven years to convince my wife, April, to join me in launching the first-ever Arlington International Film Festival."

Asked about her response to movies when young, April says: "I did not develop a strong relationship to film until I was in college, around 19 years old. I was extremely taken with the introspective films of Ingmar Bergman and Woody Allen. Going to the cinema was like extended therapy for me. At that age, we would see a film and then go for coffee and discuss it in-depth ... really savoring what the filmmaker had delivered!"

The filmmaker's magic, described lovingly as "ghost light" in a memoir by Frank Rich, shimmers over Ranck and Guzman as they offer Arlington films with an international viewpoint. Sample the award winners in this year's lineup >>

To learn how the festival improves the town's intellectual climate as well as its economy, talk to Peluso, a man with a long background in finance and the arts. We sat down twice recently at a picnic table outside the Kickstand Cafe, on sunny mornings hard by the bikeway. Joining us for one interview was Roly Chaput, a former member of the town's Redevelopment Board, also an indefatigable volunteer.

"In 60 years working with clients," Peluso said, he called the festival founders "the very top entrepreneurial people" he has known. He said he finds entrepreneurs "exciting ... watching people start from scratch." 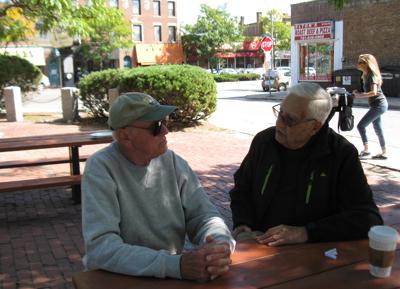 Roly Chaput, left, who has years of experience in what makes Arlington tick, and Ted Peluso discuss the town's future.

The easy way, he said, is to find a rich local donor who adorns an event with a name. They have not; they have set up a nonprofit and networked relentlessly.

Peluso recalled a meeting at Panera in the spring of 2012. Joining the festival founders were ATED folks, including Angela Olszewski, chair of Arlington Committee on Tourism and Economic Development.

Each got to pitch its purposes, making key connections. Guzman and Ranck were intrigued by the then-proposed visitors' center at the Uncle Sam Plaza.

Always thinking film, Alberto suggested a video, to promote Arlington. The center opened at Town Day this year, and you can see the video by Chris LaGare, who grew up in town, here >>

This tie-in brings together factors ATED is after -- boosting to paying customers what the town offers, its past and its restaurant-inspired present.

A visitor might check out the booth, learn about the Chamber of Commerce and the Dallin Art Museum across Mystic Street, then walk to nearby places to eat and in October take in an intriguing film.

Peluso said he sees Guzman at least 10 times a year at events around town. He and his wife "never give up."

Their doggedness to engage has extended the festival far beyond October: The announcement of a new season comes in January, a poster contest involving high schoolers the month after, film showings through the year at the Robbins Library, connections to the Old Schwamb Mill and across the border in Medford. Months ago the flags announcing the festival hung over Mass. Ave. Sandwich board parked in key spots were placed last spring.

Then consider the films themselves. Peluso noted two that sharpened his views of the world:

-- "Venice Syndrome," screened at last year's fest, portrays a romantically beautiful city destroying itself under the pressure of mass tourism; and

-- "Broken Promises, Broken Dreams," shown at the Regent earlier this year, is a documentary sympathetic to Palestinians by Alice Rothschild, a gynecologist who lives in Brookline.

"A lot of films are serious, but well worth seeing," he said. "Does this bring value to Arlington? Absolutely."

Who chooses the films?

Festival films are chosen by a selection committee that views all entries. They make decisions based on the festival mission, content and technical qualities of the film. They also choose the films to be awarded in each category. All members are filmmakers, teach film or are in the film industry. Making up the 2014 jury are Eric Stange, Elizabeth DiNolfo, Elizabeth Myles Birk, Cesar Perez and Alice Bouvrie.

Peluso, a native of Brooklyn, whose accent has not shed its roots, moved to the area to be near his grandchildren following retirement.

His qualifications to speak about entrepreneurs and business development: He toiled in Manhattan for BDO, an accounting firm, for 19 years, rising to partner. For 17 years, he worked in Westchester County, retiring in 1993.

In retirement, he was a consultant for the Westchester County Association in White Plains, from 1993 to 2000. The organization's aim: push area's economic vitality.

Not only a numbers guy, he maintained connections to theater groups in the White Plains area -- on board of White Plains Performing Arts Center and another group in Tarrytown as well as festivals in Pleasantville, N.Y.

Theaters? Arlington has two -- the Capitol and Regent.

A working paper about economic development, prepared in connection with the Arlington's master plan, has this to say about the town's theaters: They "draw approximately 200,000 patrons per year, who spend $2.4 million per year at shops and restaurants in these districts, according to  a  study  titled "Economic Impact of Arlington’s Theatres" (September 2013) prepared  for  the Arlington Planning Department by Margaret Collins of Cambridge Economic Research.

The film-festival organizers are putting those numbers to work.

For July 2019 photos, click here >> Boston Women's Market is scheduled to return to Arlington from…

Deadline tonight to submit art to be displayed at local cafe

Respond by Aug. 24 to help ACA plan its future

Are you having a booth? Let the public know

Town issues tips after mosquitoes nearby test positive for virus