Arlington looks into adapting to new kinds of workspaces

UPDATED, Sept. 4: Increasingly, work is not a place to which to commute from home; in fact, you may work at home, or at least nearby.

Amid this changing landscape, work is not a product you make, though it can be, but an idea you try to shape into reality. Further, work may not be a boss dictating to passive followers, but collaboration toward goals around shared values.

Apparent vacancies in town as of August 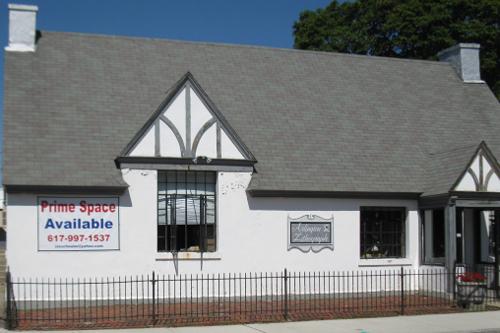 PRIME SPACE: Arlington Lithograph property, on Schouler Court, next to Arlington High School, is among the available spaces in town.

Our neighbors in Somerville and Cambridge are adjusting to these changes in the workplace. Why not Arlington?

And so the town planning office held a two-hour forum this summer to take a look at what some call coworking and others makerspaces. About 30 people heard from those involved in altered work life -- one of them from Arlington.

Created by four guys from MIT, the start-up -- which Reichert called the largest clean-tech firm in Northeast -- began in Cambridge, moved to South Boston, then 2013 to Somerville, where it has grown to 46 companies with 170 full-time jobs plus 95 contractor interns. (See who's involved here >>)

"Somerville very welcoming," she said, making it possible for her company to take advantage of the city's hot market.

Greentown Labs occupies 33,000 square feet of the former Ames Envelope, a company whose CEO had been Bill Shea, the longtime Arlington luminary who died in 2012.

The transition of the space is emblematic of the times.

Ames, founded in 1919, focused on manufacturing. When it was sold in 2010, Shea wrote: "Computer-driven digital solutions have increasingly replaced the company's principal markets of X-ray and medical filing products. In addition, the Northeast has become an expensive area to operate a manufacturing operation. Unfortunately, a number of the company's endeavors to supplement the product downturn have been unsuccessful."

At one time, Ames was Somerville's biggest business employer, with 600 workers.

The sprawling complex is buzzing again. Greentown, whose space is 85 percent full, is bringing new kinds of manufacturing. So is Artisan's Asylum.

Molly Rubenstein, its executive director, also at the Arlington co-working forum, said the unusual mixture of efforts serving arts, engineering and manufacturing occupies 300,000 square feet. Ninety 90 percent of that space was vacant in 2011, she said; now it's 98 percent occupied.

"We're the cool thing you put into a vacant area that drives the development," she told the June forum at Town Hall. She noted changes that have swept Brooklyn, where artists have spurred growth.

She comments in ways tradition supervisors would not: "People come to work and play ... the place has an all-hours impact."

One who plays and works there is the fellow who calls himself Zebbler. He is Peter Berdovsky, the multimedia artist and Arlington High School graduate who with collaborators built a laser light show for last New Year's Eve in Boston.

Opportunities in Arlington for nontraditional professionals?

For those who don't create light shows, co-working spaces can be more ordinary.

"In Arlington," Reichert said, "people with young children who want to get away for a couple of hours to a more professional space. Right now, all you have is Starbucks."

Or Kickstand Cafe. Or Bagelville.

Greentown charges $400 a month per desk.

David Miller, regional sales manager of PivotDesk, works for a flexible business that finds office space. Based in Boulder, Colo., it owns no space but arranges lease deals and provides marketing.

The repeated mantra: What about space?

"Our model is not build it and they will come," she said. This is not as much about the space as the users: Who's coming, and what are they doing?"

Those were the various pitches from panelists. The audience had questions.

Carol Kowalski, the town's planning director, said Arlington's master plan, in the works for two years this fall, is expected to lead to zoning changes. "What do you want to see?" she asked, adding a key query -- how have improvements to the panelists' buildings been paid?

Reichert said she received $1.2 million from 13 sources, including a working-capital loan from the city of Somerville.

Rubenstein said the cost for her effort was a "totally different scale." A local bank provided $75,000 loan, there were $30,000 in personal loans and she raised $30,000 from the community one year and a similar amount the year before.

Sushil K. Tuli, chairman of Leader Bank, asked what kind of businesses do you want in the town, and what is the town's position on that?

Kowalski, after putting in a plug for lending, said: "The answer is what the community needs .... It has to come from the labor source in Arlington."

She added: "I can't think of a business use from one these spaces [suggested by panelists] that wouldn't be welcome here."

Fields, town economic-development director, said later that three of the banks represented at the forum (Cambridge Savings, Leader and Rockland Trust) as well as East Cambridge Savings have expressed support for attracting collaborative workspaces into Arlington.

"I do not know at this time whether entrepreneurs have been talking to local banks about funding creation of collaborative workspaces in Arlington," he wrote Aug. 13. "I haven't heard anything about that from my contacts.

"I have heard that local entrepreneurs have been scouting out spaces for co-working sites however."

"Don't underestimate the potential of what might just show up," Rubenstein said, referring to the simple addition of vending machines to the Artisan’s Asylum providing a new buzz.

Pam Hallett, executive director of the Housing Corporation of Arlington, said the nonprofit has a building with space that she would love to rent. She asked the PivotDesk rep whether the space has to be built out already to be considered quality stock.

You can have a totally empty space, Miller responded, noting "basic furniture and Wi-Fi [will provide] a good start."

What was your most avoidable mistake?

Andrea Foerst asked panelists about their most avoidable mistake.

Reichert said she should have tried to raise funds earlier for an executive director or an operations manager.

Rubenstein cited lack of investment in basic management systems, including a cohesive database to track assets, processes and people.

A woman who identified herself as a property owner asked whether tenants pay market rent, and Jacobson said they are "largely paying competitive rents." Reichert agreed.

Fields called Arlington rents "very reasonable." He gave these per-square-foot benchmarks: Industrial spaces are in the in teens, retail in 20s and offices in the high 20s or low 30s.

Ken Good, representing MassDevelopment, a lender that financed Housing Corporation of Arlington apartment project near Capitol Square, said he has studied co-working spaces for more than two years. MassDevelopment can make loans to owners of up to 90 percent of value.

What are Arlington's pluses and minuses?

Reichert cited its proximity to innovation-producing institutions at MIT and Kendall Square. "People who work there could work here," she said.

Disadvantage? "We're not on Red Line," she said.

Selectman Joseph Curro Jr. said he visualizes Arlington as a "third wave." Those choosing to settle here amid a still-hot real estate market have a lot of hope.

Part of that stems, he said, from investing in quality of life, including attention to bike lanes. He said he knows the town needs to work on parking issues.

In conclusion to the forum, Fields noted two relevant percentages:

-- 33 percent of workers are "contingent," or those not connected to a particular employer; by 2020, that number is expected to increase to 40 percent, which signals opportunities for co-working.

-- 70 percent of all co-working firms are profitable, according to Deskmag, a magazine that covers this workforce trend.

See the whole forum as broadcast of ACMi here >>