Mugar hearing continues as 180-day period extended to May 20

Mugar: Most of it is the triangular tract west of Thorndike Field. / Google Earth

UPDATED, May 12: The town Zoning Board of Appeals met Tuesday, April 20, and held a continued hearing about the permit for Thorndike Place.

The hearing was short, as the board voted to extend the 180-day hearing period, which was to expire April 23.

Read the summary by Steve Revilak, a board member who provides his personal notes >>

The next hearing was set for May 11, but that has been changed to Thursday, May 13.

Reach the Zoom meeting here >> The hearing period is extended to May 20.

View the cover letter and revised concept submission from the applicant here.

Raising another significant concern, the town manager in a recent letter to the ZBA addressed the status of the approximately 12 acres of the site that the Applicant proposes to transfer to the Town or another entity for "conservation" as part of the project. He laid out numerous conditions that must be met by the Applicant before any transfer could occur and that should be part of the ZBA's final decision, which is expected to be made in April.

The applicant submitted a letter to MassHousing regarding the project revisions. You can view the letter here under Reference Material titled ‘MassHousing Notice’ dated March 8, 2021.

The Zoning Board of Appeals has issued a draft decision on the application for a comprehensive permit for Thorndike Place on the Mugar land in East Arlington. The 40-page decision appears to grant a permit for the project as presented at the Feb. 16 hearing: a massive single building of 172 rental units fronting immediately on Dorothy Road.  Many terms and conditions are itemized, but significant concerns remain unaddressed.

At the Select Board meeting on March 1, Selectman Steve DeCourcey made a slide presentation about the Mugar/Thorndike Place Comprehensive Permit and the board subsequently voted 5-0 to send additional comments to the Zoning Board of Appeals, following up on the Select Board letter of Feb. 22. The new comments call into question the validity of the project’s initial approval by MassHousing. 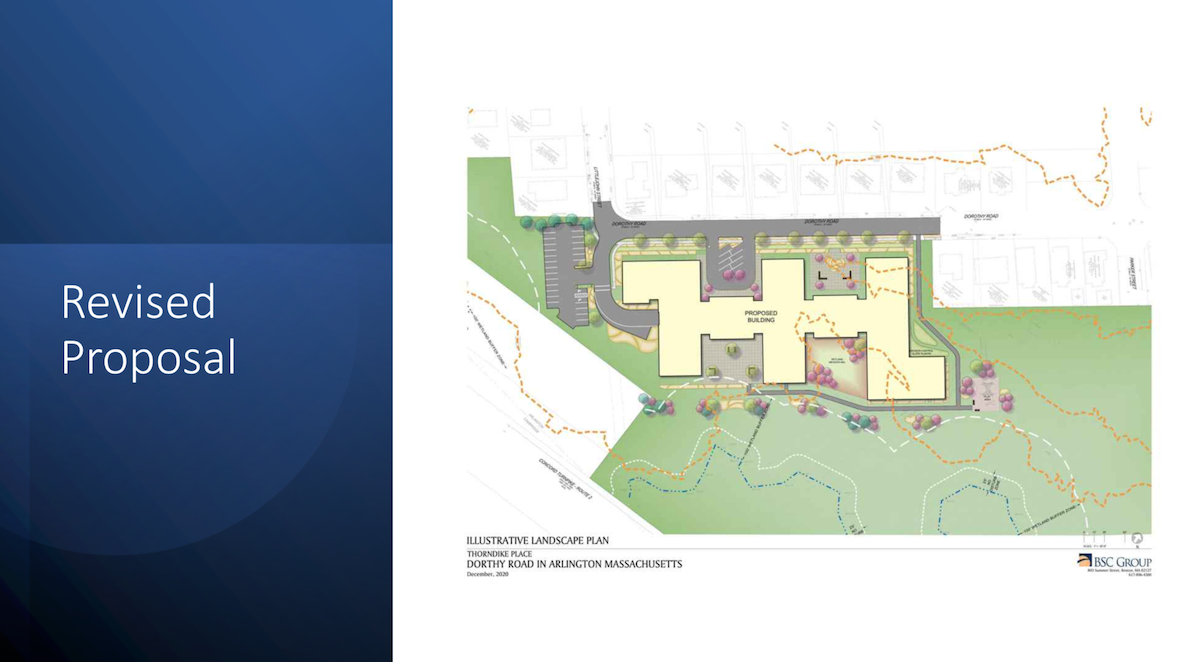 from the revised Thorndike Place proposal
The current scheme, presented to the ZBA by Oaktree Development on Feb. 16, eliminates the townhouses along Dorothy Road, consolidating the entire project of 172 rental units into one large structure fronting immediately on Dorothy. Removal of the townhouses takes away the only design element that was reasonably compatible with the style and scale of the neighborhood. It also takes away any opportunities for home ownership, leaving only rental units in the remaining four-story structure.

The original 2015 “Project Eligibility Approval” by MassHousing based its findings on the project having a mix of rental and ownership opportunities, and that “the proposed townhouse units on Dorothy Road were designed as a transitional zone between the duplex and single family homes of the existing residential neighborhood to the North and East of the project and the larger proposed apartment building to the South.” Both of these key elements have now been removed. The Select Board suggests that without the townhouses the original Eligibility Approval could not have been granted. The Board has urged the ZBA to request that the Applicant submit a new site approval application for review by MassHousing before any further action is taken on the current proposal.

State Sen. Cindy Friedman has also sent a letter to the ZBA reinforcing her opposition to the proposed Thorndike Place project.