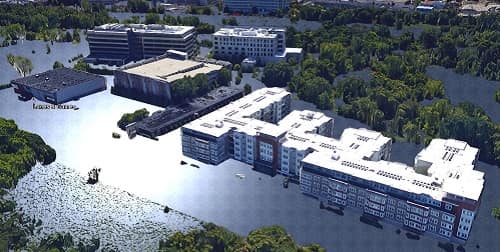 UPDATED, May 15: The town Redevelopment Board weighed Monday, May 15, how to respond to a 320-unit housing project planned for the site of Lanes & Games and a motel across Route 2 in Cambridge from East Arlington's Mugar project.

The Cambridge Planning Board on May 3 filed its written permit decision supporting the project with the city clerk. That launches a 20-day appeal period, during which "persons aggrieved" by the board's action can launch a court challenge seeking to void the permits.

In a brief session before Town Meeting on April 24, the board told representatives from Cambridge as well as those opposing the Mugar project that it must find out whether the town has standing in the matter. An initial opinion from Town Counsel Doug Heim says the town does not have standing. Planning Director Jenny Raitt said she would have to see whether Cambridge gave notice to Arlington about its April hearing regarding a project at Lanes & Games.

Madeleine Aster, a member of two North Cambridge neighborhood groups, had urged the town board to support an appeal of what she calls "a reckless decision made by the Cambridge Planning Board" allowing the project in a the Alewife flood plain. In a letter, she asked Raitt and board members for further study to see how the development will affect Arlington.

She said the most recent case in which the town board commented on a proposed development in a neighboring community was for the Royal Belmont (formerly called Acorn Park, Belmont Uplands 40B development). She did not provide a date. A review of town minutes shows references to Belmont Uplands going back to 2001. In 2006, the Redevelopment Board wrote a letter opposing the project. On March 18, 2014, selectmen voted to table indefinitely a letter of concern about the project's impact of the Silver Maple Forest.

The presence of lead and arsenic as well as a state rule prohibiting all residential uses on the Lanes & Games site since 1997 warrant further study for how it will affect neighboring areas.

Google maps of the area, one showing flood depths superimposed, also reflect why those involved want to have a say about the proposal.

Aster is sharing issues raised by the Fresh Pond Residents Alliance and North Cambridge Stabilization Committee. She does not head either group.

The time to object

Michael Brandon, clerk of the North Cambridge Stabilization Committee and a longtime critic of development in the Alewife floodplain, said a WickedLocal account of the April 4 Planning Board meeting accurately reported that the board unanimously voted to grant the array of special permits (with conditions).

But the story neglects to report that those who object have time to do so. 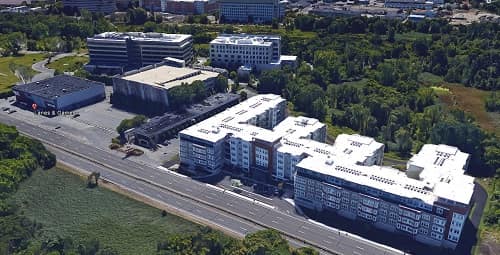 Unflooded Lanes & Games next to Vox on 2 condos along Route 2. / Google Earth via FPRA

"The timing of that approval is relevant, because a petitioner is statutorily entitled to a [Planning Board] decision within 90 days of the public hearing on a special permit application unless the applicant waives that right and extends the deadline," Brandon wrote.

"Once the board's April 4 decision is drafted by city staff and reviewed and signed by the PB chairperson, it must be filed with the city clerk. That triggers a 20-day window during which 'an aggrieved party' can appeal the written decision in Superior or Land Court.

"Unlike the concerned neighborhood associations," the Arlington board "is a 'party in interest.' with legal standing to challenge the zoning permit decision. But time is of the essence, because the 20-day statutory limit on filing appeals is strictly enforced by the courts."

He added that should the Arlington Redevelopment Board decides to support a challenge the special permits, there would be sufficient time for the town solicitor to craft a complaint and serve it by mail on the CPB. Brandon clarified April 20 that if the town board wants to consult legal counsel about filing a timely court appeal, it would not necessarily have to act at its Monday meeting, since the earliest the statute of limitations on appealing will run out is sometime in May.

The proposed development, with 242 parking space, by Criterion Development Partners, with an office in Waltham, would face property across the busy highway where 219 units have been planned on the Mugar site. That 40B project remains on hold after the town's zoning board decided last November to appeal the state's rejection of the land-area calculation for affordable housing.

The developer has not responded to a request for comment.

May 24 meeting in Cambridge

The Fresh Pond Residents Alliance (FPRA) has scheduled a meeting about this issue, set for Wednesday, May 24, from 6:30 to 8:30 p.m. at Tobin School, Cambridge. Agenda:

In her letter to planning, Aster says the proposed 320 units with 242 parking spaces raise issues of soil contamination, traffic and flooding that would have an impact on Arlington. Writing on behalf of Alewife and North Cambridge neighborhoods, Aster makes these points:

"1. The soil is heavily contaminated with recorded soil samplings containing as much as 100,000 parts per million of lead, as well as numerous other industrial chemicals (methylene chloride, acetone, MEK and toluene, and more) in the soil and groundwater at the site, to the point where past filings have questioned whether the site can be cost-effectively remediated at all. We believe a thorough remediation would be essential for any reuse of the site.

"2. The environmental investigations of the site have a long history, extending back 20 years. The state Department of Environmental Protection has issued an Activity and Use Limitation prohibiting all residential uses on the site since 1997. Simply stated, residential uses are not allowed, by regulation and decision.

"3. The same developer of the Residences at Alewife built the 227-unit residential building Vox on Two next door. The residents of this building could be at risk during any construction work on the site.

"4. The developer did not include the information on site contamination in his presentation to the Cambridge Planning Board [April 4]. The history of contamination was discovered independently by Cambridge residents."

"1. For a project-review special permit, the Cambridge zoning ordinance section 19.20 specifies that the Planning Board must make a determination that the project will not have 'a substantial adverse impact on city traffic.' Presently, Route 2 traffic is congested for several hours of the day, and the new development will make traffic incrementally worse by some 840 daily vehicle trips. The Planning Board has no definition or standard for 'substantial adverse impact on city traffic' and thus no basis for its judgment in this case.

"3. The traffic is highly congested along Routes 2 and 16 during peak hours and other times of the day. Drivers may seek alternate routes on local residential streets in Arlington, Belmont and Cambridge.

"4. According to the developer's study, the Residences at Alewife Station will generate 1,000 daily transit trips. The report fails to consider the ability of the Red Line to handle more riders, because the current capacity limits on the Red Line are already surpassed. The report does not address how bus passengers from Arlington, Belmont, Cambridge and other towns will be able to get to the Alewife T station.

"5. ~1,500 more apartments have already been approved for future construction in the flood plain.

"6. A 530 multiunit site on Wheeler Street in Cambridge is pending approval, which will add more congestion to the Alewife Brook Turnpike.

"7. The Cambridge comprehensive planning process, called Envision Cambridge, http://envision.cambridgema.gov/ is proposing extensive new development in the Route 2, Triangle and Quadrangle areas, without significant improvements to transportation infrastructure and without addressing the severe Parkway traffic congestion that today extends from Mass. Ave. and past Concord Avenue in both directions.

"The Planning Board is routinely approving new development proposals at Alewife that will add new traffic to already congested conditions. Roadways simply do not have the capacity to handle more traffic. Diverting traffic to residential streets in Arlington, Belmont and Cambridge will diminish the quality of life for the existing residents and will present major safety concerns."

"In his testimony before the Cambridge Planning Board on April 4, Stephen Kaiser identified the water depths at numerous Alewife locations during a hurricane similar to Hurricane Sandy in New York City in 2012. A sampling of the water depths is listed below, in feet:

"Route 2 near Lake Street off ramp: 6

"Ramp from MBTA station to Route 2: 4

"Note that the flood waters would be crossing Concord Avenue with a depth of three feet and would continue to flow into the Fresh Pond reservoir. City emergency crews would probably need to build an extensive sandbag wall at least four feet high in order to prevent flood waters from penetrating the reservoir.

"The developer is planning design changes in the new development to recognize the combination of:

"2070 flooding runoff , tidal surges from Boston Harbor, increased ocean elevations caused by climate change. These changes are clearly inadequate, given the magnitude of future flooding. The threat to residents confronting 5 1/2 feet of water on Route 2 has not been recognized. The only accessible route by emergency vehicles to access the Route 2 site would be via Rindge Avenue, which would be flooded to a depth of 1 1/2 feet.

"For the above reasons, we hope you will consider appealing the Cambridge Planning Board decision."

About the image showing flooded condos

Mike Nakagawa created the Google Earth image showing the Lanes & Games site next to Vox2, along Route 2, across from the Mugar site. An engineer, he is on the Cambridge Climate Vulnerability Working Group and is a Fresh Pond Residents Alliance officer.

Google Earth credits the National Oceanographic and Atmospheric Administration for its images, and the Fresh Pond Residents Alliance is responsible for adding the water to the images.

In explaining his work, he wrote that the "roads leading to Lanes & Games will be under 4-plus feet of water in the 1-percent storm. As more units are affected, the likelihood of an emergency increases.

"How are emergency services going to reach in time? How about fire trucks if an electrical fire starts?"

He added that he current FEMA 500-year flood elevation is 10.7 feet NAVD, which is only a couple inches less than the 2070 1-percent storm flood elevation.