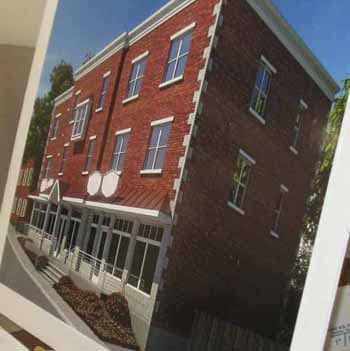 A mixed-use development proposed to replace a former Summer Street garage described as an "eyesore" faced a series of questions on Monday, Feb. 6, from neighbors and the Redevelopment Board.

Representatives of Campobasso Properties of Arlington are scheduled to return March 6 after hearing concerns about project size, parking, transportation, drainage and safety.

Kathleen Hayes, a resident of Glenbrook Lane condos, situated behind the project site, and another questioned the building's size. "It's too big for the neighborhood," said Margaret Petrella of nearby Edmund Road. Board member Andrew West appeared to agree, as changes to project size was among his suggestions.

Developers plan to remove the two-bay garage at 483 Summer St., vacant since 2013, when Nano's closed, and construct a building that has 2,774 square feet of retail space, a 781-square-foot office and more than 7,000 square feet of residential units. One will be affordable.

The housing-retail project would have seven residential units, six of them two-bedroom; an office for Campobasso and four potential retail locations. They would be built of the developer can get a special permit and relief from the town's minimum parking requirements.

Attorney Robert J. Annese, representing Campobasso, called the location was "always a very sorry situation." Saying the empty garage is an "eyesore," he said the proposal would help fulfill a key aim of the 2015 master plan encouraging mixed-use development.

The plan size requires 12 spaces, he said, and he asked the board to reduce that by three. Parking will be at the rear of the building, with two additional parking spaces to the right of the building, next to Arlington Cafe.

He said Campobasso owns the property on the opposite side, residential units, next to Great Expectations preschool, offering the opportunity for a combined driveway via an easement. That would allow an exit away from traffic light at Forest Street and the baseball field. Also shared with 489 Summer would be a dumpster.

The developer will deemphasize parking by charging some units for it, by advertising some with no parking, by noting that an MBTA stop (67 bus) is nearby, by including bicycle parking in the basement and by citing its location relatively near the Minuteman Bikeway.

"We are open to bicycle parking outside, if the board prefers," Annese said.

Among other points of note, the proposal would:

-- Allow the four retail retail spaces to be configured as two each;

-- Provide a building height of 38 feet (zoning allows 40), but that does not include an eight-foot-high covering for compressors, which officials said is not restricted by zoning.

Board officials have questions

Then officials weighed in. That was four members of the Redevelopment Board (Michael Cayer has resigned, and selectmen confirmed new member Gene Benson) and town planner Jenny Reiss.

She said the developer had met numerous conditions, and she referred to a report showing special conditions. Among the issues remaining attention were landscaping, transportation, affordable housing and drainage.

Chairman Andrew Bunnell asked where retail employees will park. The hope is that local workers who would not need to drive may fill the slots, Annese said.

Asked about a restaurant, Annese said it could be considered.

Board member Dave Watson raised a number of concerns about transportation. They included doubts about tandem parking, saying that having cars back directly into an intersection with a crosswalk is a safety issue.

He asked for more thought about bicycle parking for residents, customers and visitors. In particular, he thought having residents carry bikes to and from the basement is "not a preferred option."

Board member Kin Lau raised a question about how parking space are counted in a mixed-use project, one requiring further research.

West called the transportation plan "critical" and asked that lighting plans be added to conditions that must be satisfied.

Then those gathered for the hearing had a chance to speak, and eight of 14 did.

Elaine Crowder of Glenbrook asked about abating noise from compressors and asked whether environmental hazards had been studied.

Attorney Annese said a 21E had been done. He was referring to that chapter of state law governing control of oil and hazardous material. He said test borings had shown the site was suitable for building.

Chris Loreti of Adams Street, a former Redevelopment Board member, followed up, asking the 21E effort had turned up any restrictions. Annese objected to the line of questioning.

Loreti also asked whether storm water would be leaving the site after construction, and "migrate, as it does now." He also noted that he understands that backing out of a driveway is not allowed for a mixed-use project.

Chris Carmody of Peter Tufts Road, an 18-year resident, offered drawings with his comments. He began with drainage, calling the condos behind the proposed project site "the swamp." Why that name? Because, he said, all neighborhood water flows toward those condos.

As to parking, he said, the proposed building too big for the lot, and that will push parking into neighborhood.

While developer renderings show trees, Carmody claimed that tree will be removed.

"We don't want to turn into Davis Square," he said.

Sean Dooley of Summer Street wondered whether permeable pavement was sufficient to handle runoff, because homes are built on ledge. Water "will run down to my backyard," he said.

A Glenbrook Lane resident said that from her back window, she can see "the lake" in your backyard. She agreed that something should be done with that property [483 Summer]. But she wondered this project fit the bill, asking whether access around the building would accommodate a firetruck.

Carol Gonzalez, who runs Great Expectations at 493 Summer, expressed concern about rodent control and safety for the 56 children at her preschool. She was told that issues with construction noise and dust would have to be taken up with the town once they occurred.

After the parties agreed to continue the hearing until March 6, the board voted, 4-0.