Taste of home at Tango 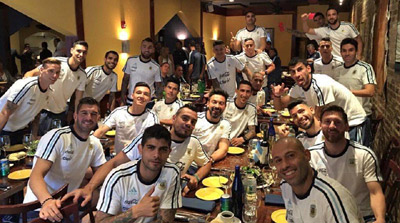 UPDATED, June 22: Did you see Argentina's men's soccer team dining Sunday, June 18, at Tango? With the windows blocked, only a select few did.

Fortunately, the restaurant provided a photo, and the Globe published it. Now you can see the players, including star Lionel Messi, lunching and vamping, as the spot in the Center opened early.

Messi is at bottom right, second from front in Tango photo.

General manager Alissa Mermet told The Globe that about 60 people were in the group, and they dined on the restaurant’s traditional Argentine cuisine: beef empanadas followed by parrillada.

The team, at Gillette, for the Copa America Centenario soccer tournament, won the quarterfinal match the night before, 4-1, over Venezuela.

In the semifinals, Argentina trounced the United States, 4-0, in Houston, as Messi played key roles.