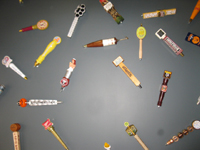 Beer handles in entry at Common Ground. The space in the center awaits a special case.

UPDATED, Oct. 13: Broadway Plaza, undergoing a bit of a makeover itself, now has a restaurant that represents changes in the neighborhood.

Common Ground, at 319 Broadway, is a long way from Gemma and Krazy Karry's, its failed predecessors.

"We are not in Allston anymore," said Rodney "Rhoney" Kangiser, the general manager in an interview.

Of course, the original Common Ground Bar & Grill remains, as it has for 16 years at 85 Harvard St, in that section of Boston.

The new venue, which opened Sept. 30, brings to Arlington Center a "gastropub" vibe. The term was coined in Britain to describe a spot emphasizing food with its rink.

"No '90s nights," he said, referring to entertainment that reflects Allston's college crowd. As a bartender there, he said he heard "96 straight '90s nights," and he's glad to leave them behind.

Arlington residents can expect a sensitivity to noise, craft beer and a menu largely made from scratch on the premises by Chef Jaime Suárez. See the menu here >>

As we talked in an early afternoon, people popped in asking to see a menu and owner Bob O'Guin buzzed about in an orange sweatshirt, with questions for Kangiser. 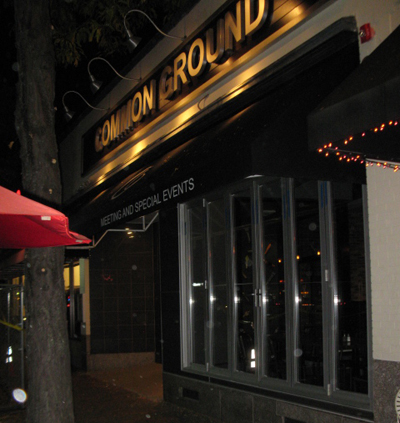 We had some for O'Guin: He estimated renovation costs at $500,000. Part of that was $125,000 for various improvements, including a sprinkler system, which he had not been required of the previous owner.

The opening, long in coming, is still not full-fledged. Hours are 5 p.m. to midnight, which is just dandy for the Regent Theatre crowd.

Common Ground has a staff of 22 the day we talked, but Kangiser is still hiring, as he seeks about 40 employees.

He thought he would be able to open for lunch and brunch after those hires are made -- "in about two weeks."

For parking, always tight at the plaza, the company points customers to the Russell Common lot, behind St. Agnes, but says it is working on another option.

Beer handles in entry at Common Ground. The list of draught beers includes Common Ground Draft. The manager says that is not a specific in-house brew, but pours from a "rotating barrel." That is, after a tasting by the patrons, friends and employees among 10 to 15 beers, the top three are chosen, based on cost and taste. That one remains on tap a few weeks.

One example is Naughty Nurse amber ale, called a cross between an Oktoberfest and Sam Adams Brick Wall.

Kangiser, who has worked in restaurants and nightclubs for 24 years, half in Florida and half in Massachusetts, said a new steel handle saying "Common Ground Draft" is being made and will go in the space for it in middle of the display of handles that greet customers as they arrive.

Broadway Plaza has for a number of years had a restaurant with music accompanying meals, at Fusion Taste, a few doors away.

Common Ground is the first restaurant with windows that fold out, which won't happen until next spring, unless climate change accelerates.

Kangiser said the sound system had just been tested for the 102 seats in the main dining area, and "the music will not go outside." He pointed to three speakers on the ceiling, and the one in the front is off.

He said that, according to code, the sound is "barely above crowd noise."

The 96-seat function room in the rear, where noise might be more likely to occur, is strongly insulated, he said.

Not an entertainment venue

He said of Common Ground Arlington: "We do not want to be an entertainment venue," though there may be some music.

The room at the rear will be used for business meetings and rehearsal dinners before weddings.

There is no plan for a regular disc jockey, he said.

In the front, "we may have a trivia night," he said.

Noise was a concern raised by neighbors when the Redevelopment Board considered its plans in July 2013. Selectmen had their say in September. Selectmen approved the plan last December. The board plans to revisit the restaurant/bar’s outdoor seating and awning plans at a later date.

Kangiser said that after the opening, "we have had tons of energy."

YourArlington's publisher saw a lively crowd there on the misty evening of Friday, Oct. 3, with a steady stream of customers.

Plaza work: fountain is no more

UPDATE: As for the fenced-in area at Broadway Plaza, was asked about the work Oct. 7, Carol Kowalski, director of planning and community development wrote that Broadway Plaza was identified in the 2010 Koff Commercial Development study as a high priority for redesign and revitalization.

"Part of the problem with the plaza are the numerous items that obstruct passage and use," she wrote.

Last year, as an interim step to make the plaza more functional, work was planned for the current fiscal year to remove the defunct fountain structure. The fountain was in use for a very short period after it was constructed in 1977, before it was bricked over.

"Simply removing its remains and continuing the existing brick surface in its place will add useable space and opportunities for passage, for daily public use, or for activities and special programming (maybe a stage for the next Arlington Alive festival?)," she suggested.

She added that her department has no immediate further plans for the space this fiscal year.

She wrote that the department "supports active use of public spaces in Arlington's commercial centers. I hope for and expect a more comprehensive re-design of Broadway Plaza in the near future."
On Sept. 30, Michael Rademacher said town employees are removing the stepped granite block structure and "creating more useable plaza space. It should be complete in a couple weeks."