What customers see as they walk in.

With 150 seats and modest prices, the pub marks a revamped gateway to East Arlington, at 25 Mass. Ave., next to Homewood Suites.

Manager William Lyons, an Arlington native who has a long resume of success with such establishments, including the House of Blues when it was in Cambridge, says he hopes that on some nights, musicians will accompany diners. Mondays might be a night for a guest chef, perhaps from Arlington, he said.

A self-described "hockey guy" who graduated from Arlington High School in 1977, Lyons said about 90 percent of the restaurant is his design. "I’ve had it in my head for years," he said, calling it "the town's first real bar."

Following more than $1 million in renovations to the former Hollywood Video, closed since 2007, Lyons provided a peek inside his head. From the name to the decor, the grill and tavern exude history and Arlington:

-- Menotomy, of course, is what the town was called before 1807, when it became West Cambridge. 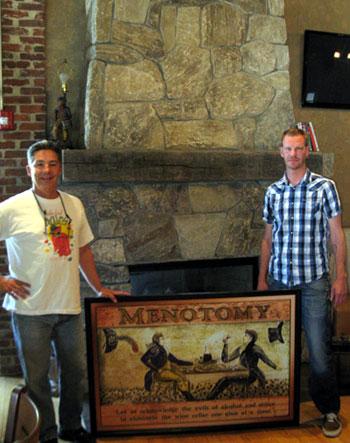 -- A tip of the tricorn hat to history continue with drinks: The "Cooper’s Flip" recalls Jason Winship and Jabez Wyman, two residents British soldiers ambushed and killed on April 19, 1775, at Cooper's Tavern. The drink has dark rum, cask ale, molasses, pumpkin and egg.

-- The beer list includes Battle Road 1775 Tavern Ale, made in Ipswich, and, perhaps as a nod to his alma mater, Spy Ponder Brew, made in Deerfield.

-- The hand-cut stone fireplace, in the lounge area in the front, helps time stand still. Bill Specht, a friend from his AHS class, used Connecticut fieldstone from the Berkshires, arranging it around a 115-year-old, hand-hewn beam bought in Cambridge.

-- The floor made from wide-plank heart pine adds a Colonial-era feel.

"We had to transform an ugly 1970s space," he said of the place that rented videos, to one with an older attitude.

Lyons said that, before the changes, he crawled above the ceiling and saw copper and brick. Now exposed, customers will see what had been hidden.

The blackboard advertising daily specials is from the 1930s: It was rescued from the elementary school Lyons attended, the Brackett, before it was demolished in 1998.

Added to the walls are historical maps as well as a photo of the original Brackett.

That's the mood. What about the food?

The beer list is at the end of this story.

Chef was at Stoddard's, Chez Henri

Behind the menu is Mark Thompson, the restaurant's chef, who was chef de cuisine at Chez Henri in Cambridge for nearly a decade.

More recently, the pair worked together at Stoddard’s Fine Food & Ale, on Temple Street, Boston. Lyons opened as its general manager in 2010, with Thompson as chef. Lyons called it "Boston's first gastropub."

"Tavern meets bistro ..." Thompson called over on May 21, as final work on Menotomy Grill proceeded. "... what we're doing here."

Outdoors, across from the hotel, amid trees and plants, Lyons pointed to spots for six tables. Four four-tops and two two-tops, he said, using restaurant lingo that reflects his years in the business.

Separating the tables from the access to the hotel is a wrought-iron fence about 3 feet high, "to keep kids from grabbing booze," a requirement by selectmen when they approved the license last August.

What Lyons and his partners are doing is transforming the 4,500-square-foot space, with 118 parking spaces (shared with CVS and Arlington Health and Fitness), using all Lyons has learned after starting as a bartender at Faneuil Hall in 1980.

A bit of his own history

He moved up to bar management in 1984-5 at the Boston Sail Loft Cafe & Bar, on Atlantic Avenue, Boston.

A bartender and then in management at House of Blues when it was near Harvard Square, he spent 6 1/2 years away from New England -- in New Orleans, Chicago and then Atlanta.

Between 1998 and 2010, he said he opened more than 10 restaurants, including the Black Horse Tavern in Winchester.

As he talked during an initial interview May 14, work continued in a frenzy around us.

Asked whether he watched "Restaurant: Impossible," he shook his head and said, "My investors do."

Four 42-inch TVs hang on the wall, but Lyons makes clear that "it is not a sports bar."

Sports may be on TV -- after all, Lyons played hockey at St. Anselm and for Ed Burns at AHS -- but some night, he said, he might decide to show "The Last Waltz." The 1976 film of the farewell concert by the Band hints at his musical taste.

He said he's thinking about having live music a couple of times a week. A group or solo could perform in the corner near Mass. Ave. and the hotel.

Lyons's historical theme extends to participation in the town: He's a member of economic and tourism committee, known as A-TED, as well as the sign committee, discussed at this year's regular Town Meeting.  "Happy to help," he said.

Lyons said May 21 that after an opening for staff May 28-29, he would hold an opening for family and friends May 30 through June 1. The opening to the public had scheduled for June 3. That schedule has been thrown off. Lyons has told YourArlington that a June 10 opening is expected.

Hours: Open every night, 4:30 to midnight

BBC COFFEEHOUSE PORTER - Deerfield, MA ABV 6.2%
This dark ale combines the taste of real organic coffee with the popular Drayman's Porter. The robust coffee flavor comes from a special coffee extract made for exclusively for the BBC by Dean's Beans, New Salem, MA.

BATTLE ROAD 1775 TAVERN ALE -Ipswich, MA ABV 5.4%
This old-style ale starts with quality North American 2-Row barley malt, a bit of high-dried "Munich-style," a toasty "Biscuit" malt and a flavorful caramelized "Munich" malt to round out what is a predominately dry, crisp ale.

FOUNDERS PALE ALE - Grand Rapids, MI ABV 5.4%
A testament to Cascade hops in a bottle, this medium-bodied pale ale has a refreshing citrus flavor and a distinctive floral hop aroma due to the aggressive addition of hops during fermentation. You'll notice a slight malty sweetness with a balanced hop finish.

LAGUNITAS IPA - Lagunitas, CA ABV 6.2%
Moderately hoppy and well balanced. Copious Cascade and Centennial hops with Crystal malt. Lagunitas makes a point to thank each drinker for taking the time to try their flagship beer by putting this on each of its bottles: "Thanks for choosing to spend the next few minutes with this special homicidally hoppy ale. Mortal combat on the battlefield of your palate!"

ALLAGASH WHITE - Portland, ME ABV 5%
Brewed with wheat, spiced with coriander and orange peel, this beer is fruity, refreshing and slightly cloudy in appearance

OMMEGANG HENNEPIN - Cooperstown, NY ABV 7.7%
The aroma of this farmhouse   saison is spicy with banana,   orange peel and lemon

This story was published Wednesday, May 22, 2013, and updated June 4 after the the public opening day changed.