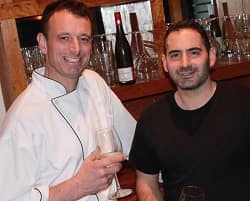 Bistro Duet, a French restaurant that had been open for close to a year, has closed, but the specific reasons remain up in the air.

A letter from owner and general manager Wayne A. Duprey point to some factors leading to the decision to close the restaurant at 190 Mass. Ave. "Pre-opening delays, coupled with the rising costs of the restaurant business, are enough to force us out of business," it says, in part. The message was on its front window and on Bistro Duet's Facebook site.

Duprey was a partner with chef Cyrille Couet, and the pair raised $20,000 via Kickstarter to renovate the former flora space, which had occupied for 20 years the building that once housed the Arlington Five Cents Savings Bank.

Bistro Duet made its debut on New Year's Eve in 2016 and became a local fan favorite for French food. The restaurant was voted Best French restaurant in 2017 by the Boston A-List, had attention from the Boston Globe over the past year and was recognized earlier this month by the Globe Magazine as one of the area's top 40 new restaurants.

The restaurant received a favorable review from a respected food writer in YourArlington last March.

Through an intermediary, one owner agreed to provide YourArlington with a statement, but after consulting with an attorney, has not responded to inquiries.

Helping out the past year was Carla Gaviglio Dorato, who also operates the Artful Heart, a gift shop, at 8 Medford St. Business continued there apace, as a 30-percent-off sale was to end Jan. 31.