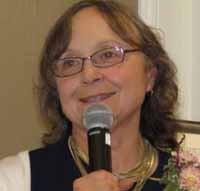 Come with me now and take a bit of an unexpected ride -- from Arlington's caring present and far back into its commercial past.

Perhaps you don't expect surprises, large or small, at a Chamber of Commerce gala. In the one held Thursday, Oct. 6, you'd be wrong.

The chamber honored its first Citizen of the Year, DeAnne Dupont, who cofounded no commercial business, as you might expect, but an entrepreneurial nonprofit -- Food Link, which addresses the issue of "suburban hunger."

Also recognized were 12 of the town's oldest enterprises, dating to before the Civil War, in 1854.

And after an estimated 300 town leaders and relatives dined at the Sons of Italy on sumptuous fare provided by Menotomy Grill & Tavern, local historian Richard A. Duffy traced the origin of organizations supporting town commerce.

Before history, let's focus on surprises in 2016.

OLD FAITHFULS: Kathleen Darcy, senior vice president and small-business specialist for Cambridge Savings Bank, and on the chamber's executive committee, introduced representatives of town the oldest businesses and gave each a certificate (in parentheses is the year each was established, if known). In the page-one photo, they are, from left:

Robert Penta, St. Agnes School (1888) was present but out of range.

Representatives did not attend from:

Call that connection with town businesses perhaps unexpected or more likely an acknowledgment by local commerce that we must value what sustains us.

Christine Bongiorno, town head of health and human services, outlined the background. As manager of the Arlington Food Pantry, she has welcomed Food Link, which helps feed 250 families a month with 3,000 to 5,000 pounds of food delivered.

Beth Locke, chamber executive director, introduced Dupont, who said she embarrassed her brother Lee, who was attending the event from New Orleans, where Dupont used to live.

As influences, she cited her parents -- her dad, a pharmacist, who was good for a loan and providing discounted drugs to those in need; and her mom, who aided a 15-year-old mom.

She exhibited her own generosity by pointing in the front row to Food Link cofounder Julie Kremer.

And now the town's past, brought to you in fact-filled nuggets of wit by Duffy.

In a slide show titled "Getting Down to Business 100 Years Ago," the longtime, loving preserver of what once was took us back, farther the promised century.

Duffuy's wayback machine returned to 1878, and an early reference to town commerce, just 11 years after the town changed its name to Arlington. We followed him to 1883 for event called Traders' Day, which included companies giving employees a weekday off for a picnic.

In 1899, a year after the Spanish-American War, the Arlington Traders' Association began, followed by the first true organization of town business leaders in 1908, the last year the Cubs won the World Series.

The eight years later, the Board of Trade, the first true town business organization, emerged. It was 1916, when Woodrow Wilson was president, shown in the slide show with a top hat. It was renamed the Chamber of Commerce in 1928.

"There are a lot of bankers in the room," Duffy said, asking all on what bill is Wilson's image. No one ventured a guess, and so he pulled an alleged $100,000 bill from his pocket and vowed to keep it.

In 1916, Arlington, known for its 25 vegetable and fruit farms, had a population of 16,000 people, up 60 percent in 10 years. The numbers were due to explode in following decades.

He drew chuckles with his comment that a possible expansion of a rail spur where Lowell Street is now was opposed: "Didn't want people coming here from Woburn."

In the year before American entered World War I, Arlington had three banks -- all in the same building. One became the Arlington Five-Cent Savings Bank.

Into this context, members of the Board of Trade brought a civic dimension -- urging Town Meeting to changed from open to representative Town Meeting and touting the benefits of a town-manager form of government, not realized until 1952, in the Town Manager Act.

Did you know this?

The slide show drew recognition and the delight in discovery as it rolled out these images and facts of Arlington's past:

-- The Arlington Gas Light Co. built its home office on Grove Street in 1914. It has long been the home of various town DPW offices;

-- The Bryant Estate bought -- used as a place for Board of Trade meetings, catered by N.J. Hardy, cream and confectioner, whose first name was Napoleon -- is now Court Street post office.

-- Do you see a doctor or a physical therapist at 22 Mill St.? The site was once the location of Frost Insecticide Co.

-- Concerned about empty storefronts on Mass. Ave. in the Center and on Broadway Plaza? An old photo of Touraine -- which became Cherry Webb & Touraine, the women's retail store, and loomed for a half-century over the plaza where CVS once was -- drew an audible aah.

Warm applause followed Duffy's account. Master of ceremonies Bob Bowes, fighting a cold, announced that the author was donating his honorarium to the Friends of Robbins Library.

In the absence of state Rep. Sean Garballey, Selectman Joseph Curro Jr. read two proclamations -- from Gov. Baker noting the chamber's 100 years and from the Legislature, citing the 1916 establishment of the Arlington Board of Trade.

Selectman Kevin Greeley, a white-haired presence, led the call-and-response "whereas" and chided the crowd: "Those whereases were pathetic!"

He told an Irish joke, in dialect, that concluded with a patriot saying "Hang me first" rather than listen to a politician's speech.

The Board of Trade began with eight members. In 2016, chamber members number 265.