Heights hangout and home since 1999 to close this month 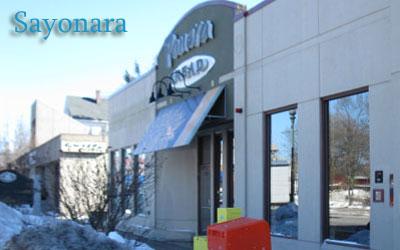 The seemingly ever-expanding company called Panera Bread is contracting in Arlington. The Heights store, a home of sorts to many since 1999, will close at the end of March.

"We're working very hard to find a replacement that we believe will be a wonderful addition" to the neighborhood," said Len Bierbrier, the Lexington developer who owns the property and has been behind a number of key changes in Heights businesses in recent years.

He said closing the Heights Panera was the company's choice, as the St. Louis based firm chose not renew the option on its lease.

"As one of Panera Bread's oldest locations and the second market to open in Boston, the Arlington bakery-cafe has been a wonderful location for the company.

"Panera continually invests in efforts to improve and renovate bakery-cafes to ensure that their customers have the dining experience they have come appreciate from the brand. Unfortunately, in some existing locations, it has been difficult to achieve the standards they believe will meet customer expectations. With the expiration of their lease, they have taken the opportunity to close the Arlington bakery-cafe for this reason."

Panera has 22 locations within 10 miles of Arlington, including Lexington, Porter Square and soon at Fresh Pond Mall, where a former Newbury Comics is undergoing renovation.

Employees at the Heights store are said to have jobs at Fresh Pond if they choose to go.

A knowledgeable observer said the company is not known to close stores.

A manager takes a look at the local spot 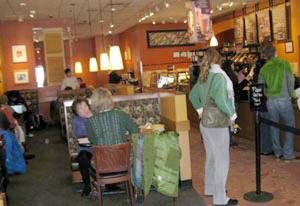 Lunchtime customers wait at the counter at Panera.Jay Snyder, a manager at the Heights Panera, said in an interview Feb. 18 that he plans to move to the Fresh Pond location March 29. The 55-year-old who has lived in Arlington since 2007 and has liked walking to work took time out to talk about the store and his customers.

Addressing standards before the company spokesman mentioned them, he said that in the third quarter of 2012, the Heights store had the highest "promoter score" in the Atlantic region. That is a measure of satisfaction based on customer surveys.

Thus, he was surprised to learn in early February, after about three months as manager, the Heights store was scheduled to close.

As word leaked out to customers, they were surprised, too.

One of them, a Town Meeting member, expressed shock and wondered whether the sides negotiating a lease were "talking past each other."

The Heights Panera is a known hangout for a wide spectrum of people -- from town officials, including Selectmen Dan Dunn and Diane Mahon, and business people to teens and the homeless.

"We've been called the 'Cheers' of Panera,'" Snyder said.

As to the bakery/cafe's "regulars," he said, "They come in the same time every day, sit in the same place, order the same meal. When one doesn't show up, another asks why."

Among those who frequented the place in the past was a retired Harvard financial executive who invested in Au Bon Pain before it became Panera Bread in the 1990s.

There are also street people -- a sort of Arlington Panera Cares, the nonprofit, donation-based locations, including one at Boston's Government Center.

Snyder pointed to Rick, a regular who was a stroke victim and went into assisted living.

Then there's Ben, who gets half-dozen bagels and pastry rings.

"I'll have an order waiting for them when they come through the door," he said of known regulars.

After superstorm Sandy flooded Mass. Ave. late last October, a torrent that washed into Panera, but Snyder opened up anyway.

At 1:30 on a recent afternoon, a lunch crowd with a range of ages packed the place. Many were in their late teens. A number took advantage of wi-fi, plying smart phones and laptops. Many of the 71 seats were filled. A long, chaotic line snaked toward the counter.

A woman in her 20s wearing a dark blue sweatshirt that says Bar Harbor edited at a nearby table. Her square lunch alarm went off with a raspy sound, red lights rotating: food ready. She brought back a large salad, a small soup.

In a booth, in a scene that could have been from a foreign film, an elderly black man with a graying moustache wearing a cap with an NBC logo talked with a woman who was taking notes.

At a corner near the rear exit sitting in a "living room" chair, a woman who has lived in the Heights 48 years said she has been coming to Panera since it opened. She gets a bagel and a coffee.

Asked what she would do after March, she said: "Drive to the Waltham," where there is another Panera.

As for the Heights employees, Halfond, the Panera representative, wrote that the cafes outside of town "will also serve to support the Arlington bakery-cafes associates and managers who wish to continue with the brand."

This story was published Wednesday, March 6, 2013.