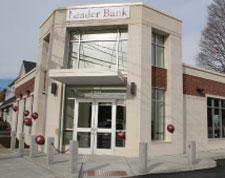 In an effort to embrace all of Arlington, Leader Bank has opened its sixth branch, this one at the former Video Horizon store along Mass. Ave. near Ottoson Middle School.
The ceremony on Wednesday, Dec. 12, at Leader’s third branch in town means the bank, which opened in 2002, now has a presence in the Heights. The event follows the opening last June of the bank's loan center across from Arlington High School where Cameras Inc. once stood.
Bathed in midmorning sunlight streaming in the high windows, a series of the bank's executives lit candles and placed them on two tall bronze stands before Sushil K. Tuli, Leader's president and CEO, snipped the ribbon suspended between them.

This was no usual ribbon: It held colorful paper flowers, a garland one might see at an Indian wedding.

"I am extremely proud of Leader Bank’s continued growth and expansion as we open yet another branch for our customers," Tuli said. "Our newest branch is our sixth in just over 10 years, and is a testament to the loyalty of our valued customers as well as the hard work and dedication of our employees, as we continue to strive to provide the best possible banking services to Arlington and our neighboring communities."

Following the grand-opening ceremonies, Leader Bank welcomed Kevin and Angela Daley of Angelina’s Pastry as they made one of the first deposits at the Heights branch. The shop, next-door to the branch, has been a Leader customer since opening in 2011. The couple provided coffee and refreshments to opening ceremonies.

The Heights branch offers full service with a wide variety of deposit and lending products for personal and commercial use. The branch will also offer safe-deposit boxes available for the use of its customers, doubling the number of Leader Bank branches with such a service.

Jeffrey O’Connor is the manager for the Heights branch, at 1201 Mass. Ave.

The assistant manager is Lea Palladino. Jonathan Roger is the banker, and Katie Boyce is the teller.

The branch has an ATM inside the front door.

Parking is to the right of the bank.

Leader branches beyond Arlington are in Belmont, Cambridge and Burlington.

Not only did Leader Bank open its first branch in the Heights, a series of four 12s aligned like stars for the Children's Room.

The Arlington nonprofit received approval for its construction loan and refinanced mortgage -- the first closing on the branch's first day at noon on Dec. 12, 2012.

"This gives us the opportunity to fulfill our mission and expand what we do," said Donna Smith Sharff, the executive director, in thanking Leader.

The financing illustrates Sushil K. Tuli, the bank president's view of neighborhood banking: The Children's Room is right across Mass. Ave. from the new bank,

The nonprofit, which has operated independently in Arlington since 1999, provides counseling, education and other services to grieving children, teens and their families who have lost loves ones to accidents and illnesses.

"Leader Bank is proud to continue its partnership with The Children’s Room," Tuli said. "The Children’s Room provides invaluable services to the families of Arlington and our surrounding communities, and we are grateful that this wonderful organization has chosen Leader Bank to service its lending and banking needs. We look forward to rewarding that trust with superior customer service in the years to come."

Smith Sharff attended the closing with the group's president, Michael Gilligan, and Treasurer, Alan Simpson. Cheryl Glantz, senior vice president of commercial lending, attended the closing on behalf of the bank. The loan was closed with the assistance of local attorneys Lawrence Scult and Bruce Fitzsimmons, representing Leader Bank and The Children’s Room, respectively.

Smith Sharff, who has led the organization for 2 1/2 years and has been on the staff for a decade, said the loan will allow then to renovate the basement, so that office space can move there. That will free areas of the upstairs to expand programs for peer support.

Smith Sharff said the loan from Leader, "at very reasonable terms,' will allow The Children’s Room to offer multiple programs at one time and expand their outreach to the community.

Its staff has added an intern, bringing the total of such positions to six.
The nonprofit has been in the home that was once a bookstore since 2004. From 1999 to 2004, it was at First Baptist Church.

As Leader officials met with Bruce Fitzsimmons, the attorney representing the nonprofit, as well as Alan Simpson, Children's Room treasurer, and Smith Sharff, balloons and poinsettias suggested the festive occasion, while outside workers continued with finishing touches on the building.

For more information regarding The Children’s Room and its mission, visit www.childrensroom.org.