To customers, employees, food store going but will not be forgotten 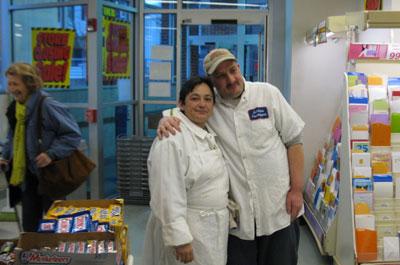 Johnnie's employees Elaine Dulcetta and Ronnie DiBacco share one of their last moments at the store. /  Photo by Marjorie Howard

Loyal customers of Johnnie’s Foodmaster gathered Friday afternoon to say farewell to the employees they’ve come to know like family and the setting that felt like a community gathering place instead of a supermarket. The Mass. Ave. store closed Sunday, Nov. 18, and will be replaced by a Whole Foods by next fall.

Over chocolate cake and fruit punch, customers and employees reminisced, hugged and shed a few tears as they said goodbye. Floating above them was a bouquet of two dozen black balloons along with dozens of signs offering groceries at a discount. "Nothing Held Back!" and "Everything Must Go!" the signs said.

'They knew us by name'

"This was never just a job," said Manager John Langdon, who spent 14 of his 27 years with the company at the Arlington store. "For years and years, I saw the same customers here, and they knew us by name. It was just a pleasure to be here and get to know people."

Customers said they felt the same way. Cricket Beauregard and Carol Band, loyal customers who organized the party, said employees went out of their way to be helpful. Beauregard has been shopping at Johnnie’s since 1988 and said employees had an "amazing spirit," not only providing great service but soothing a crying child if necessary. Band said if she was short on cash, they’d say, “Pay me next time,” which of course she would do.

Jessie Brown recalled deli counter workers giving her son, now 19, a piece of cheese when he was a baby and continuing to ask about him over the years. "It’s what you would expect from friends and neighbors, never from your grocery store .... I’ll miss the manager who would wiggle an eyebrow to let you know he was opening a register for a new mom whose arms were full."
Gwen Hooper also got cheese at the deli but it was for her cat, who loved American cheese. "The deli counter people would ask, 'Is this for Rose?' whenever I bought some," she remembered.

Richard Duffy, unofficial town historian, said the building that houses Johnny opened in 1948 as one of the First National Stores and was the town’s first free-standing grocery stores. "It was the first store in town to be built for the automobile era with a dedicated parking lot, yet it catered to pedestrians."
Duffy said the main entrance was originally on Mass. Ave., so people could come in off the street to shop, but the store was remodeled in the 1960s, and the main entrance was moved next to the parking lot.

As they nibbled on cake, many customers said they had no idea where they would shop after Johnnie’s closes, while employees said they hope to be hired by Whole Foods. Most have had interviews but have not yet heard whether they have jobs.

"I spent more time here with my fellow workers and with the customers than with my own family," said Elaine Dulcetta, who worked in the meat department. "The saddest thing is I may not see the customers again."

Earlier reports said all 10 Johnnie's Foodmaster stores would close and Whole Foods would take over six of them by Nov. 30.  See story >>

This story was published Saturday, Nov. 17, 2012. The author is a former reporter for the Boston Herald.